God is coming to the University of Victoria . . . kind of.

On September 16, the Farquhar Auditorium will host the world premiere of Mike Delamont’s God Is A Scottish Drag Queen: The Second Coming.

The two-act production is the latest in the the GIASDQ series, which debuted in 2012 and has gone on to earn critical acclaim and spawned three sequels. Two of those three sequels, parts III and IV, have been moulded into the full-length two-act Second Coming. The performance promises to provide a hilarious look at society and humanity through the lense of Delamont’s brilliant character.

But his role as God is just one of many in a multi-faceted comedy career. Over the past decade, Delamont has written and performed seven one-man shows, simultaneously cementing himself as one of Canada’s top stand-up comedians.

In an exclusive interview with the Martlet, he describes how he went from performing in high school to renting out theatres across the continent, how he “fell into the stand-up world by accident”, and what it’s really like to play God. 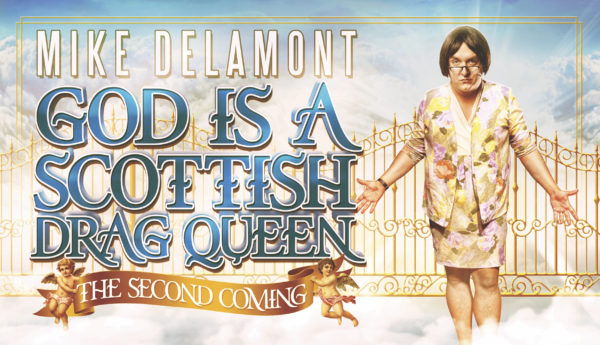 Mike Delamont, a UVic alumnus, is performing a the Farquahar Auditorium on Sept. 30. Photo via mikedelamont.com

The Martlet: How did you get started in comedy?

Mike Delamont: I was always interested in performing. I did it as a kid in high school shows. Then when I got out of high school, I started doing some fringe shows and then started with a group called Atomic Vaudeville. I tried to get in where I could. The year after high school is where it really started for me.

Was there a moment when you realized you could do comedy as a career?

I started doing sketch comedy. Here in Victoria, I had an audience base . . . in the end of 2010, I moved to Toronto to try and make it. I didn’t. And I moved back here a year later. In Toronto, I couldn’t get onstage anywhere. None of the sketch comedy groups would allow you to showcase or do a skit. They were all pretty tight-knit groups. So I started doing stand-up while I was in Toronto because that was the only place I could get onstage. So, when I came back to Victoria . . . I was gigging in more as a standup comedian but my fan base was still coming to see me.

I had my following and I had my ability to write and so I kind of fell into the stand-up world by accident. Then all of a sudden people at Just For Laughs and Halifax Comedy Festival . . . started to hear who I was. But nobody in the industry knew who I was. I didn’t do Yuk Yuks. I hadn’t gone up any of the usual ladders . . . Not a lot of nightclubs hire me. I don’t do the traditional shows . . . I tend to rent theatres and write full shows because that’s the only way I’ve ever known how to do it.

I’ve had a very odd connection with the comedy world . . . I wasn’t the guy doing ten minute spots here and there for fifty bucks, I was going “Okay, well I’ll try and and rent a 300-seater and see if I can fill it.” I took bigger risks because that’s the only way I knew how. It was certainly not intentional. It was very good business decisions made entirely by accident.

Who are your biggest comedic influences?

Early on, it was all British comedy, so Fawlty Towers and Rowan Atkinson and things like that . . . it’s always been British comedians. In one of my first years, a big pull quote that I got [said] that my show was like a cross between Dame Edna and Billy Connolly with a dollop of Eddie Izzard. I was very happy with that because I very much like all three of those people.

Who are your favourite comedians right now?

There’s an Irish comedian named Tommy Tiernan. I always really loved his stuff. He’s fantastic. There’s a guy out of New York, originally from Idaho, Ryan Hamilton, and he’s one of the funniest comedians working today. His first Netflix special comes out in August. So, we’ll soon get to see him for being the genius that he is. But he’s totally clean. Mormon. Doesn’t drink. He does ten minutes on a hot air balloon that will leave you in tears . . . I’m a big fan of Hasan Minhaj. He just had his Netflix special come out, which is incredible. I loved it so much. I like Bo Burnham as well.

What makes you laugh the hardest?

There is a thing about comedians that we don’t really laugh at comedy shows. So, most of the comedy shows I see, if somebody has a really good joke I sit back and go ‘oh, that’s really funny,’ and I know why it was funny— I can look at the structure of the bit. So, it’s pretty rare when you get lost in a joke . . . But for me [the things I laugh at] sometimes are just the stupidest things. My wife will do something and it’ll just bring me to tears. We were going to the store the other day and we walked into the wrong store . . . it just made me laugh until I cried.

It’s fun. I really like it. I’ve always been a character comedian. [My characters] always existed as parts of me, portions of my personality. I’ve always enjoyed playing the God character. I’ve never believed in God but I feel like if one was to exist, fingers crossed that it’s somewhat close to that [Scottish drag queen] character. Because the character is a little mean spirited but very fun . . . Every once in awhile, I get an email from some angry grandmother who has never seen the show who’s upset that I’m making fun of God and I always say, “Well, come and see the show. I’m not.” It’s a very inclusive show. It allows me to talk about things that are far bigger, like society and humanity and stupid things like pop culture and monkeys. It allows me to talk about the absurdity of it all.

It’s going to be a fun show. It’s the premiere. People will get to see something new . . . This is two hours of new material. I did some warm-ups here, I played a 50-seat theatre here, so some people will have seen some of the jokes but [they’re] a very, very small portion. People can look forward to an entirely new show . . . it’s a big event. It’s exciting.