The time my house was destroyed by a flood 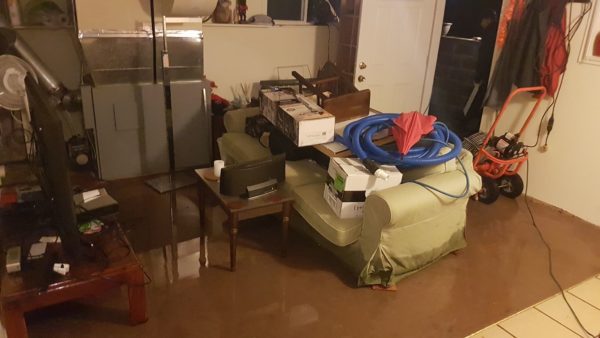 As many cozied up with hot cocoa and movies over the final days of the winter holidays, I can’t say I experienced that same luxury.

On Jan. 3, I found myself, along with my roommate and landlords, ankle-deep in mud and dirty water, armoured with garden buckets, Brita water jugs, and workshop vacuums, attempting to stop water from entering our basement suite. With determination and hard work, we were able to fail miserably.

Remember the storm that happened on the 3rd? It was wet. 48.2mm of rainfall. For reference, the entire month of December in Victoria had 153.3mm of rain. That’s a third of December’s rain in just one night! If it rained any more I would have considered building an ark.

I bused home from work as soon as my roommate called — buses seem to insist on being late during emergencies — and ran down the stairs to my door right into ankle-high water. Great. Open the door and there’s the couch soaking up water. Great. My roommate had moved all my stuff onto my bed to avoid water damage. Great (no joke — that was great, thanks man).

Our entryway is below ground level and has two drains. These drains were plugged by tree roots, turning the entire area into a concrete bathtub. The water only had one place to go, then: right into our house.

My roommate called our landlord in a panic to tell her about the flood and her first question was about the rent. Clearly she her priorities are in order. Eventually, her and her husband showed up, believing wholeheartedly they could unclog the drains. And so began our delusional fight against Mother Nature.

Our bout with the rainfall was a one-sided brawl, and in the end we came out bruised and battered as though we had just fought Conor McGregor.

Our bout with the rainfall lasted approximately four hours. It was a one-sided brawl, and in the end we came out bruised and battered as though we had just fought Conor McGregor. Our efforts amounted to a broken Brita jug, a living room you could swim in, and a realization that our landlords had no idea what they were doing.

My roommate has knowledge of floods. His previous place had the exact same problem. (If this happens a third time I’m never living with you again, Mitchell). He started packing up his stuff, but I was still in the state of mind that somehow the suite was salvageable. While he packed, I warmed up with a shower.

Alas, there is nothing more defeating than stepping out of a shower into a frigid puddle.

We propped our beds up on pots and pans to keep them out of the water, and then got the hell out of there. As we left the house it became official — we were homeless. Our girlfriends, however, kindly let us stay at their places.

The next day we had to find a place for all of our precious stuff. Where were we to put our most valuable items — crockpots, socks, and comic books? Luckily our girlfriends let us store some stuff at their places and the larger items we crammed into a storage locker.

Our home was decimated and uninhabitable. It took a long 10 days of searching, but we were eventually able to find a new place. Thankfully, the new landlord took pity on us; never underestimate the power of pity.

We moved into our new place on Jan. 13. It was a crazy few days, but thankfully we had friends who helped us out of this bind.

And just so you know, we got a new Brita water jug.