The turbulent history of Carmanah Valley 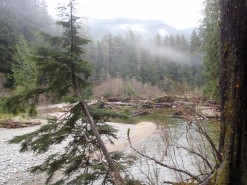 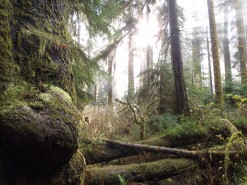 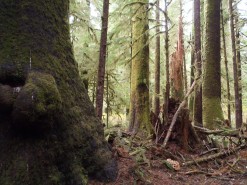 In 1988, the little-known Carmanah Valley became the site of one of the first successful environmental protest campaigns against the clearcut logging of old-growth temperate rainforests in the history of British Columbia. After discovering that the forestry company MacMillan Bloedel planned to log the nation’s tallest spruce trees “before the public even knew of them,” outdoor adventurer (and environmental preservationist) Randy Stoltmann spearheaded the creation of nature trails in the heart of the valley. In addition, the Western Canada Wilderness Committee (WCWC) launched a province-wide media strategy to reframe the public perception of the very concept of “forest.”

Throughout the 20th century in British Columbia, and especially in the post-war era, the government viewed the environment as being comprised of “harvestable” natural resources to be managed in a sustainable manner.

Old-growth forests, with their decaying tree trunks and diversity of life-stages, were seen by some as decadent and wasteful. They needed to be liquidated under the auspices of sustained-yield forestry to make room for scientifically planned tree farms which would provide jobs forever.

Sustained-yield forest management promised to ensure a “renewable resource” by allowing cuts only at a level that could be replaced by tree planting. However, the sustained yield model was more theory than practice, and without strict provincial oversight, industry habitually overcut and understocked. Coupled with the global recession of the 1980s and the increasingly damaging softwood lumber dispute with the United States, the B.C. forestry industry was in crisis even before Randy Stoltmann and the WCWC arrived in Carmanah. Environmentalists challenged the inertia of a decades-old corporatist regime (focused on profit over job creation), and in doing so added another strain to an already precarious job climate for loggers.

Eschewing civil disobedience out of principle, the WCWC needed a novel means of inspiring a visceral connection between the public and Carmanah in order to re-frame the “forest.” Visual media was the answer. Using the now iconic “Big Trees not Big Stumps” poster, the documentary Carmanah Forever, and the coffee table book Carmanah: Artistic Visions of an Ancient Rainforest, environmentalists presented Carmanah (and by proxy all of B.C.) as a magical, perfect, self-perpetuating ecosystem with unquantifiable spiritual, aesthetic and holistic values.

Juxtaposing clearcuts with untouched, ancient forest, environmentalists painted the proposed logging not only as ecologically unsound, but a crime against humanity, akin as one writer argued “to bulldozing the Parthenon.”

While they were largely left out of the debate—in 1988 the provincial government did not recognize indigenous title to the land—indigenous peoples were nonetheless used as rhetorical tools. Though Ditidaht Nuu-chah-nulth legends spoke of “wild people” who lived in the valley, settlements of Qwa-ba-diwa were chiefly coastal. In Carmanah: Visions of an Ancient Rainforest, the Ditidaht were conflated with the “ancient forest,” and their way of life presented as pristine, noble, and above all else, static. Though effective as a means of preserving the park, this “environmental colonialism” consequently led to the Ditidaht being left out of the management of the park. Alternatively, industry portrayed the Dididaht (who were historically part of the logging industry) as merely another group that would benefit from logging jobs.

Macmillan Bloedel worked quickly to counter the narrative espoused by the environmentalists by offering to preserve token stands of the more spectacular trees, including the largest Sitka spruce in Canada: the Carmanah Giant.

Clearcutting was justified as “scientifically planned,” “government approved,” and essential to “providing jobs.” The new trail created by the WCWC was marked as “dangerous.” The language of corporatist utilitarianism persisted. The forest needed “management.” Nonetheless, it was clear that times were changing, and in response to growing criticism of the cavalier ways in which the Carmanah Valley was slated for logging, Macmillan Bloedel offered to double the area cordoned off for a Sitka Spruce reserve already by October.

Despite the language of “resource management” remaining prevalent in media discourse, the Carmanah Valley was increasingly seen as something unique. By 1990, the entire Lower Carmanah was set aside as parkland despite protests by thousands of International Woodworkers of America loggers. The Upper Carmanah Valley was to be further researched to determine the appropriate course of action.

Striking back against the tide of environmental preservation, industry intensified its own media campaign. According to a biologist quoted in the industry newspaper Managing the Walbran, logging was “not expected to affect wildlife” (specifically the critically endangered marbled murrelet) and would in fact encourage tree growth as light was able to reach the valley floor to nourish seedlings. In addition, logging companies stressed that environmentalists were focused on only one aspect of forest usage. Arguing for “multiple-use” forests, industry presented environmentalist preservation as antithetical to jobs, tax revenue, and the very way of life in many Island communities. Forestry companies attempted to co-opt the language of ecology and sustainability within their rhetoric of “multiple-use” to present their plan as not only economically sound, but environmentally conscious and publicly supported.

In response, environmentalists argued that their proposed policies were not antithetical to job creation in the lumber industry. Stoltmann wrote that “no responsible conservationist would argue that all logging should be stopped; such a move would put countless people out of work and wood fibre is needed for many projects.” However, he continued, logging old-growth shows “extreme greed and shortsightedness” and makes lies of industry’s “multiple-use” concept.

Nonetheless, a gulf remained between the groups despite agreement on numerous issues. Environmentalism was still seen by loggers as deriving from an out-of-touch urban middle-class. In the words of a Lake Cowichan lumber mill employee: “Why aren’t they working? It’s a cozy little democracy where the working class can carry the ball while those on public assistance attempt to deprive others of jobs.”

Hurting matters in the second half of 1991 was the increasingly extremist tactics of radical environmentalists who were unaffiliated with the WCWC.  Dissent was largely in the form of roadblocks and passive civil disobedience, but incidences of tree spiking—planting rods into trees to intentionally damage equipment or harm lumberjacks—also began to occur.

The 1991 election marked the end of 16 years of Social Credit government in B.C. The New Democratic Party campaign was defined by the attempt to unify the diverse anti-government sentiments of environmentalists, forestry workers, indigenous peoples, and others in condemning the SoCreds as corporatists concerned only with profit. All sides looked to the new NDP government to resolves lingering issues—old-growth preservation chief amongst them.

Despite the NDP electoral victory, the increased militancy of elements within the environmental movement made rapprochement impossible.

By the end of 1991, and increasingly into 1992, logging equipment was being sabotaged and trees spiked. While the WCWC and Sierra Club were quick to distance themselves from “eco-terrorists,” forestry workers were not reassured and felt they were the “meat in the sandwich,” caught between an incompetent industry and a militant environmental movement threatening not only their economic well-being but their personal safety.

Organizing the Timber Supply Review, the Old Growth Strategy and the Commission on Resources and the Environment (CORE) in 1992 represented a comprehensive re-evaluation of the natural world by the newly inaugurated NDP government. When CORE was finally released in 1994, there was explicit mention that there would be no “working forest” on Vancouver Island.

The resulting 20 000 person protest shows the betrayal that loggers felt at the NDP government. The announcement that Upper Carmanah would be fully protected as a provincial park in 1994 signalled the triumph of urban environmentalist in B.C., but not without a serious fight.

The old-growth forest was re-framed from merely a “renewable resource” into a unique ecosystem with aesthetic, ecological, cultural and spiritual values.