The unspoken law of seat assignment 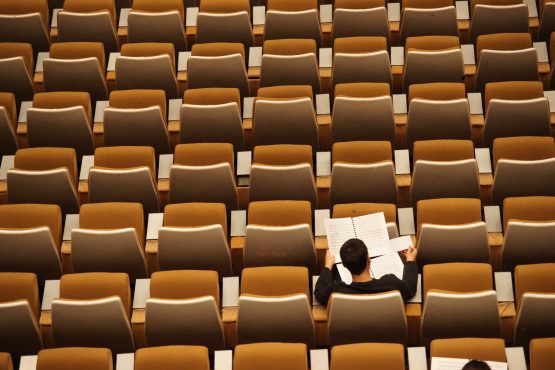 Photo by Philippe Bout via Unsplash.

It’s the first day of class. Eager students shuffle into the room like lambs to the slaughter. Frenzied feral creatures, the lot of us, scattering about frantically to find an adequate seat to call our own.

It’s an important moment. You want to pick wisely; after all, if you have any moral fiber, you know that this is where you’ll be sitting for the duration of the semester. Corners can be tempting, but push too far and you’ll end the semester with a terrible kink in your neck. Front and centre, good acoustics, but you’d best believe you’ll be a prime candidate for call out questions.

Everyone has personal preferences that they need to consider as the battle begins.

Bottoms brand names into plastic and wood alike. However, the scavengers, illiterate miscreants who struggle to acknowledge the sacred nature of unspoken seat assignment, will need to be deterred in other ways. TAs of course need nothing but title and rank to abolish any chance of insurgence. You’d have to be a simple-minded fool to test their limits. I’m not suggesting you play the suck up, but pull on a tiger’s tail and you may well fail the class.

Then there are the cool kids. You know, the girl with the flame painted nails and the Neo glasses. And that guy with a fist full of rings and a motorcycle helmet (same guy that’s been keeping rose gold alive). Their drippy carapaces serve as an ice barrier, impenetrable to the skulking vultures. The cliques, of course, find power in numbers. Stray into the pack and you may be crushed by their inside jokes and exclusionary glances.

In my three years of post-secondary education, I have yet to have anyone trifle with my chair. While I’m not exactly sure, I feel an assortment of tattoos, resting bitch face, and a well-refined glare have helped stop trespassers in their paths. Now I’m not saying you’ll necessarily need to turn to violence to hold your seat, but it doesn’t hurt to look like you’re ready to throw a punch or two.

With that said, I must confess. This year, for the first time, I turned heretical and broke the sacred law I hold so dear. It was a first-year class, a pre-rec, and I arrived late on the first day. The lord of chairs punished me with a sour-smelling corner pocket. The clique behind me liked to RAWR XD in between lecture slides and the kid in front had a head full of questions no one could care less about.

After several uncomfortable classes, I cracked. Full of piss and pride, I made my way to class 10 minutes early. I poached a seat in the middle back row.

Everything was going as planned. I kept my eyes peeled for the person whose day I was about to ruin, but the moment of confrontation never came. I was pleased. For a split second I thought I’d really managed to move spots without angering anyone!

Then the plague struck. As the lecture began, I was hit with an unrelenting sneezing fit. I sneezed and sneezed until slimy snot oozed out of every orifice on my face. I had nothing to clean myself with. No tissue, nor napkin. I tried inhaling it, but it sounded like a vacuum sucking up sandwich meat. I considered blowing it into my shirt, but by this point people were beginning to stare. I had to get out, but I couldn’t bear to trundle from the confines of my new seat, past the entire class with my face covered in mucus.

I turned to the emergency exit. There was no other way. If it triggered an alarm, so be it. To my dismay, it wouldn’t budge. I tried once, twice, three times. Each effort let loose a “click” that echoed like a gunshot throughout the lecture hall.

If they weren’t staring before, they were now.

I had lost. I curled up in defeat, right there in the corner. I stayed there for a moment, pondering the punishment for my transgression. As I crawled out from the inside of my shirt, I wiped my nose, an inadequate attempt at ablution. The boogers blended with my chest hair making an uncomfortable, messy mark for me to bear. My eyes remained fixed on the floor as I sullenly made my way back to the accursed chair.

I’ve since returned to the sweet-smelling corner pocket bestowed to me by the benevolent god of chairs.

The unspoken law of seat assignment is no joke. Test it at your own risk.