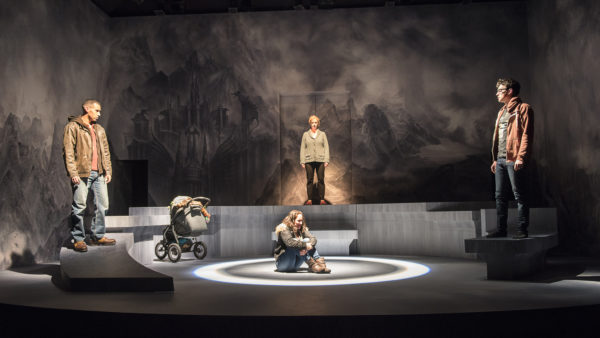 Running all of this month at the Belfry, UVic Writing prof Joan MacLeod’s The Valley is full of universal truths and intimately unique characters. It’s also remarkably topical. The Valley premiered in Calgary in 2013 and since then has only become more relevant, discussing mental health and police violence, issues ubiquitous in the North American collective consciousness.

MacLeod, an award-winning playwright, took the 2007 death of Robert Dziekanski at the Vancouver International Airport as a seed of inspiration and grew it into something of her own: the story of 18-year-old Connor (Matt Reznek), a middle-class Vancouver kid who drops out of his first semester of university for reasons his dedicated mother Sharon (Colleen Wheeler) can’t quite discern. Meanwhile, police officer and new parent Dan (Luc Roderique) struggles with the relentless nature of his work, and his wife Janie (Rebecca Auerbach) deals with her own unstable past.

All four characters recount their histories of encounters with police; this device frames the first act as Connor becomes increasingly absorbed in the fantasy world of the novels he has written, and builds tension toward the central event of the play: a tense altercation between Connor and Dan at the Joyce Street subway station. The scene’s fight direction (by Nicholas Harrison) and lighting and sound design (Itai Erdal and Brian Linds respectively) bring it vividly to life.

The Valley’s monologue-heavy script exposes the complex interplay of perspectives at work in the aftermath of such an incident; each character has a skillfully revealed background that informs their reactions. The audience wavers from sympathy to contempt for each character  from moment to moment; each has contradictions, and there is no clear antagonist to lay blame upon. In this way, the play rings piercingly true to life. Under the direction of Roy Surette, the actors capture the nuanced connections between each pairing of characters. Wheeler gives a stand-out performance; Sharon’s lines often come at the perfect time to break a heavy moment (a line about mayonnaise is one of great catharsis).

Early in Act One, Janie says, “A good portion of the calls [Dan] goes out on are about loneliness, about being alone,” and this, it seems, is the demon all the characters reckon with. The increasingly mainstream portrayal of mental health seems to diagnose conditions like depression in a vacuum: as illnesses that can be isolated in the body, without acknowledgment of the social and environmental influences that may lead to such struggles. What MacLeod does so well is examine the cultural forces at play, ultimately delivering a message of resilience.

The bare set, designed by Pam Johnson, adapts to multiple locations and allows parallel scenes to play out simultaneously. As a reminder of how much impact non-realism can have, characters not in scene sometimes hover in the shadows, while a backdrop of Connor’s imagined world (by Carole Klemm) colours the entire two hours.

The Valley’s West Coast flair adds poignancy and the occasional laugh for B.C. viewers. If the sold out opening night was any indication, The Valley will have a successful run and uphold the reputations of the Belfry and of MacLeod as shining examples in the realm of meaningful theatre.

The Valley plays at the Belfry until Feb. 28. Visit belfry.bc.ca for tickets and showtimes..