The value of Canadian radio

A woman who is not afraid to take chances and try new things, Jo-Ann Roberts — beloved CBC radio broadcaster and current guest lecturer at UVic — will give a free public lecture titled “Public Broadcasting and the Public Good” on Jan. 30 at 7:30 p.m.

Roberts was first introduced to the idea of a journalism career while at a career fair in grade 10. 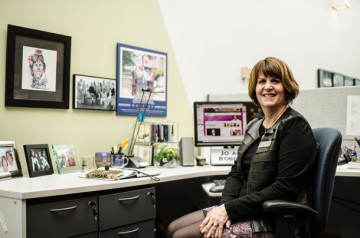 Jo-Ann Roberts is teaching at UVic this semester.

Having grown up in New Brunswick, Roberts attended Mount Allison University, where she studied Political Science and English, before pursuing Honours Journalism at Carleton University. Roberts identifies herself as “a curious person, and a generalist who enjoys a variety of topics,” making journalism a perfect fit.

After graduating from Carleton in 1978, Roberts worked a few months as editor for a weekly newspaper in Moncton, New Brunswick, before starting her career as a radio broadcaster for CBC. However, when her first of four children was born in 1982, Roberts chose to leave CBC and freelance instead. Freelancing for 12 years, Roberts covered every area of journalism: print, radio, television and even some documentary work, allowing her to gain invaluable experience. Over those years, Roberts remained loyal to CBC radio, relying on it as her source of adult company during the day while she was home with her kids and her husband was at work. Roberts decided to return to CBC in 1994 as a morning show host in Moncton, where beginning work at the grim hour of 4:30 a.m. was part of her daily routine. “Morning radio is essential radio,” says Roberts, with the core of it being news and weather.

Roberts moved to Victoria in 2004 to start an afternoon radio show on CBC Radio One called All Points West, which she describes as “a show that aims to provide Vancouver Island with a place to catch up on the top news items of the day and hear about interesting people and events in their community.”

“Afternoon radio is companion radio,” says Roberts. “When people tune in, it’s like they are inviting you into a part of their day.”

Roberts applied for the Harvey Stevenson Southam Guest Lecturer position at UVic in order “to be part of a meaningful conversation about what it will take for [the CBC] to play a meaningful role in the fabric of this country in this future.” Driven by her passion and experience in the field, Roberts says, “I hope [my students] discover what a treasure we have in the CBC, but also want to be part of shaping it for the next generation.”

Roberts’ “Public Broadcasting and the Public Good” talk will take place in the Human and Social Development Building, room A240, at 7:30 p.m. Admission is free.