From Ronda Rousey to the Golden State Warriors, it’s been a big year for sports in 2015. Champions were defeated, underdogs rose up, and we were even blessed with the privilege of having “My Balls Are Perfect” be a completely valid and informative headline (Thank you, Deflategate). Though there were plenty of sports stories to discuss, here are five that made a considerable impact on Canada and the world.

Soccer fever enveloped Canada and North America in 2015 as the Women’s World Cup lit up several million television sets. Despite soccer’s largely ignored status in Canada, the country fully embraced its role as host with plenty of excitement and large crowds (for the most part). Despite shamefully low attendances in certain stadiums, the tournament was a success; a record-breaking one in fact. 25.4 million in the U.S. alone tuned in to watch the Americans win their third title, a record for the most viewers of a men’s or women’s soccer match broadcast in the U.S. All in all, not too shabby.

In a move that football fans had been praying for since (what feels like) the beginning of time, Sepp Blatter was removed from his position as the head of FIFA. After numerous allegations of corruption, enough disgraceful quotes to make any PR representative cry, and the decision to award the 2022 World Cup to a country that condones often fatal slavery, the world finally said enough was enough. Under pressure from the FBI and soccer associations across the globe, Blatter announced his resignation. Later on in the year, Blatter was suspended from any footballing activity for eight years — a happy ending for all involved.

After months of making Canadians dare to dream, the Toronto Blue Jays broke all of our hearts with a 4-2 series loss in the second round of the MLB playoffs to the eventual World Series winners, the Kansas City Royals. After the acquisitions of David Price and Troy Tulowitzki, the Blue Jays went from a record low of 45 wins and 46 losses in mid-July to finishing the season top of the American League East with a 93-69 record. The team inspired fans all across the country, as the Blue Jays rallied to defeat the Texas Rangers in the first round of the playoffs before ultimately losing to the Royals — but not before one of the most memorable innings in the history of baseball and a bat-flip heard around the world.

The Seattle Seahawks pass the football 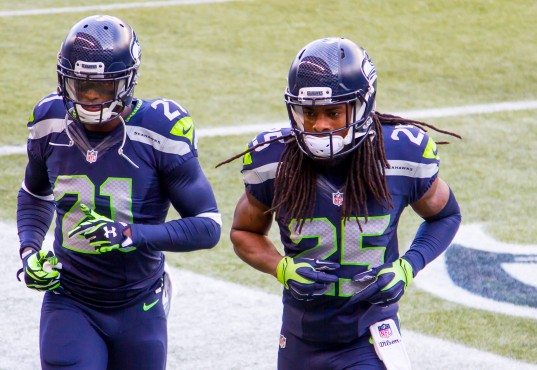 “Well, at least we’ll make it into the Martlet’s top five moments in sports now.” — the Seattle Seahawks (probably). Photo by Mike Morris via Flickr

With 18 seconds remaining in Super Bowl XLIX, the Seattle Seahawks found themselves on the New England Patriots’ goal line, down by four points and with only 25 seconds remaining in the game. The Seahawks, blessed with one of the greatest running backs of modern football in Marshawn Lynch, opted to pass. Cornerback Malcolm Butler made the interception on Seattle’s quarterback Russell Wilson and the internet exploded. Football fans across America and the world were bewildered by the bizarre decision to try and pass the football, and the Seahawks lost the chance to become the first repeat Super Bowl champions since 2004. The winners that year? The Patriots.

Despite years having passed since people first started calling for boxing champions Floyd Mayweather, Jr. and Manny Pacquiao to enter the ring together, the world was still frantic with excitement for what was marketed as “the fight of the century.” Hype before the fight had never been bigger, but, with Pacquiao years past his prime, Mayweather was happy to box defensively and safely, able to keep a lacklustre Pacquiao at bay. Fans looking forward to an aggressive, bloodthirsty match between two boxing greats were left unsatiated, and, as a result, the tame fight was retroactively dubbed “Better Never than Late.” Mayweather, who remained undefeated and pocketed $200 million from the fight, wasn’t too bothered.