Before this year’s UNO Fest, I’d never felt the need to do stretches — like the kind I’d do to cool down from a good jog — after seeing a play.

UNO Fest is Intrepid Theatre’s annual festival of solo shows — launched 20 years ago, it is the longest-running festival of its kind in North America. This year’s iteration, held from May 17-27, featured 15 performances created by artists from Victoria, Vancouver, Toronto, Halifax, New York, and San Francisco.

Adam Grant Warren poses with the wheelchair at the crux of his one-person play, ‘Last Train In’. Photo provided by UNO Fest

Many of these one-person works are stories of personal history, and each artist uses the stage differently to communicate. Adam Grant Warren, a writer and performer from Newfoundland, used his voice, his wheelchair, and a few set pieces to tell Last Train In (rice & beans theatre, Vancouver), a foray into Warren’s past and present. The play centres around one night in 2007, when Warren, living and teaching on the outskirts of London, England, found himself stranded on a subway platform with no elevator.

Warren has a charmingly animated style of delivery, and the fact that I couldn’t always tell the scripted from the riff worked mostly to the show’s advantage. Effective jokes created a satisfying, cyclical feeling — Warren’s observation that he tells people he is from St. John’s, because it’s the only place in Newfoundland people recognize, is paid off with two more occasions of living in little-known locations near big cities. The contrast between then and now resonates, too — in England, Warren’s students were rude and ungrateful; now, he sometimes receives hugs.

The use of silence, though, is even more striking. Warren uses a manual wheelchair and takes his time doing the set changes himself— pushing railing-equipped blocks around the Metro Studio’s large stage. These blocks eventually become the bridge between train platforms in a re-enactment of the night at the core of Warren’s story. Warren needed his chair carried across the bridge while he climbed the stairs, and an unfriendly station worker refused to help.

The show seems to be about human connection and overcoming challenges, but Warren also examines his expectations of himself. He ruminates on cerebral palsy, which he was born with, on the role of teachers and students, and explores a sub-story about his then-girlfriend — all with a twist at the end. Unfortunately the threads don’t quite connect, and the show feels scattered in its conclusion, like it doesn’t know what it wants to say. A bit of distillation could have made Last Train In’s unique content all the more powerful. 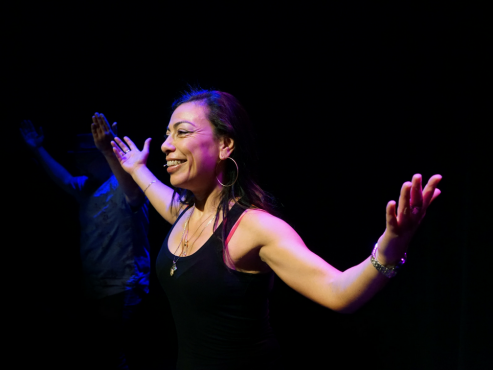 Carmen Aguirre demonstrates a salsa move for the audience of her production, ‘Broken Tailbone’. Photo provided by UNO Fest

If the content of Warren’s show is unique, so is the entire mechanism of the other show I saw: Broken Tailbone (Nightswimming, Toronto) by playwright and memoirist Carmen Aguirre, whose first book Something Fierce was a Canada Reads finalist in 2012. Aguire takes the audience on a journey into North America’s Latinx dance halls — as close to literally as possible.

As the audience gathered on the chair-free floor of the Baumann Centre, DJ Don Pedro Chamale encouraged us to move to the front. Aguirre entered and began her show, which is part salsa dance lesson, part storytelling. She opens with an instruction to move your hips in a circle, pressing your tailbone into the earth, promises to tell the story of how she once broke her own tailbone, then launches into a compellingly interwoven narrative. Aguirre’s family left Chile after the military coup d’état in 1973, and she herself joined the country’s underground resistance in her late teens. She connects this family history with her social and sexual exploits in Latinx dance clubs, explaining how changing political landscapes influenced the atmosphere and demographics of these establishments over the decades. Aguirre is hilarious and charismatic, skillfully balancing levity and gravity, and grounds her anecdotes in DJ Chamale’s soundtrack and in the audience’s current state of (attempting to) dance.

It’s such a whirlwind that I almost forgot how the story started, but Aguirre smoothly circles back to the NSFW situation in which she broke her tailbone, giving the impression she was heading there all along — an engaging way to bookend the tale. It was the details I learned, rather than my mediocre salsa steps — even though yes, I did need to stretch after — that made Broken Tailbone memorable. I learned that salsa is a combination of Latin American dances, developed in New York. I learned that some dance moves were originally invented by slaves with shackled ankles, hence the focus on hips and other small movements. I learned that in times of political turmoil, people from different Latin American ethnic groups visited the dance halls and saw their conflicts with one another suspended. Instead of talking, they just danced.

These honest touches add flair and poignancy, made possible by UNO Fest’s willingness to allow artists to tell their own stories.