Thor: Love and Thunder — the wackiest Marvel movie of all time 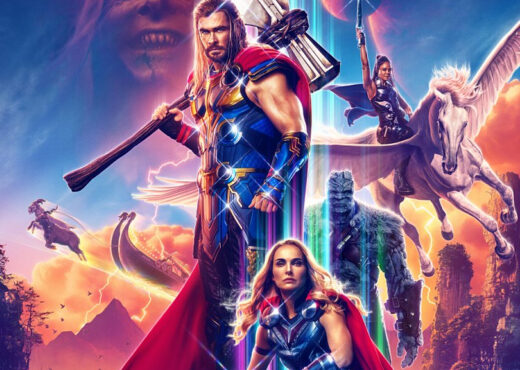 Taika Waititi’s latest Marvel movie, Thor: Love and Thunder, is filled with quirky and witty scenes; its offbeat sense of humour will knock your socks off. In most movies directed or written by Waititi, including Thor: Ragnarok, there is a balance between comedy, emotions, and action. However, in this fourth installment of the Thor franchise, wackiness overpowers all. Some viewers may deem this as a flaw, but I think it is the main draw of the movie.

In Thor: Ragnarok, all three of Waititi’s core film attributes are on display in the first 15 minutes. At one moment, Loki is falling through an endless void — and later, in a matter of minutes, he and his brother are giving an emotional goodbye to their dying father. While not doing away with this approach entirely, Love and Thunder cultivates a much stronger sense of buffoonery than previous entries.

Screaming goats, unusual love triangles, and a parody of an Old Spice commercial represent just a few examples of the humour sprinkled throughout the film. Thor, played by the shredded Chris Hemsworth, has been given the license to showcase even more of his comedic skills.

Perhaps to throw the viewer off, the movie starts with a familiar blend of emotional action content. Gorr the God Butcher, played by Christian Bale, gets in a quarrel with a callous and egomaniacal god. Bale’s performance in displaying his character’s hatred for the gods was palpable in the cinema.

Unfortunately, what lacks in most Marvel villains these days is humour. Like the protagonists, antagonists should be a bit jocular as well. The only main villain in a Marvel movie I can think of who is characterized this way is Loki. While Bale does deliver an outstanding performance, it is time for characters like Gorr to have a balanced role — a bit of malice and humour.

Despite the tonally dour set up, Hemsworth’s comedic charm and personality are the true love and thunder of the movie. In the first part of the movie, Waititi juxtaposes Thor and the Guardians of the Galaxy, which really shows Waititi’s comedic flair. Unlike the guardians, Thor is being portrayed almost as if he were an overpowered video game character.

As the guardians have space criminals other than Gorr to worry about, Thor and Korg (voiced by Waititi) have no other choice but to break away from the guardians. While parting ways with the guardians, Thor hugs Star Lord — the leader of the guardians — in comedic fashion. It did not look like Star Lord would miss him. Ah, classic Thor.

It is important to note here the progress of Thor and Star Lord’s relationship. Due to Thor’s superior powers, Star Lord has always felt insecure about his abilities. That insecurity alongside Thor believing they have become really good friends, creates one of the funniest friendship dynamics in the Marvel universe.

Thor also reunites with Jane Foster (Natalie Portman) and Valkyrie (Tessa Thompson) who, along with Korg, join in the effort to stop the enraged Gorr.

Later in the movie, Thor approaches Stormbreaker, his newest weapon, and he tells it that he has no more feelings for Mjolnir, his iconic hammer from previous entries, despite knowing this to be a lie himself. When this scene took place, I could hear faint giggles all across the cinema.

There are many funny moments associated with Jane in this new entry as well, bringing some much needed awkwardness and humour to Portman’s otherwise notoriously serious character.

This awkwardness is associated with Foster getting acclimated to her new role as Lady Thor. But, I believe it is important to note that it reflects the development of her character throughout the films — from an astrophysicist to a badass space viking.

As for Korg, he narrates the story of every main character in a funny voice — and acts in a clumsy manner whenever and wherever he can.

Waititi is also making an attempt with the younger generation. The screaming goats, something of a meme on social media, and Thor temporarily giving superhero powers to Asgardian children are prime examples.

I am not saying that comedy is all that this movie is about. There is action and emotion as well, but its general wittiness definitely carries its more serious content. Love and Thunder is full of jokes, humour, and awkward moments, with a bit of action and drama. A successful movie needs all of these things in appropriate measure.

The Internet Movie Database currently rates Thor: Love and Thunder 6.8/10. But, considering the humour carrying the movie, I would give it an 8.5/10.