Three departing Vikes reflect on their time on the court 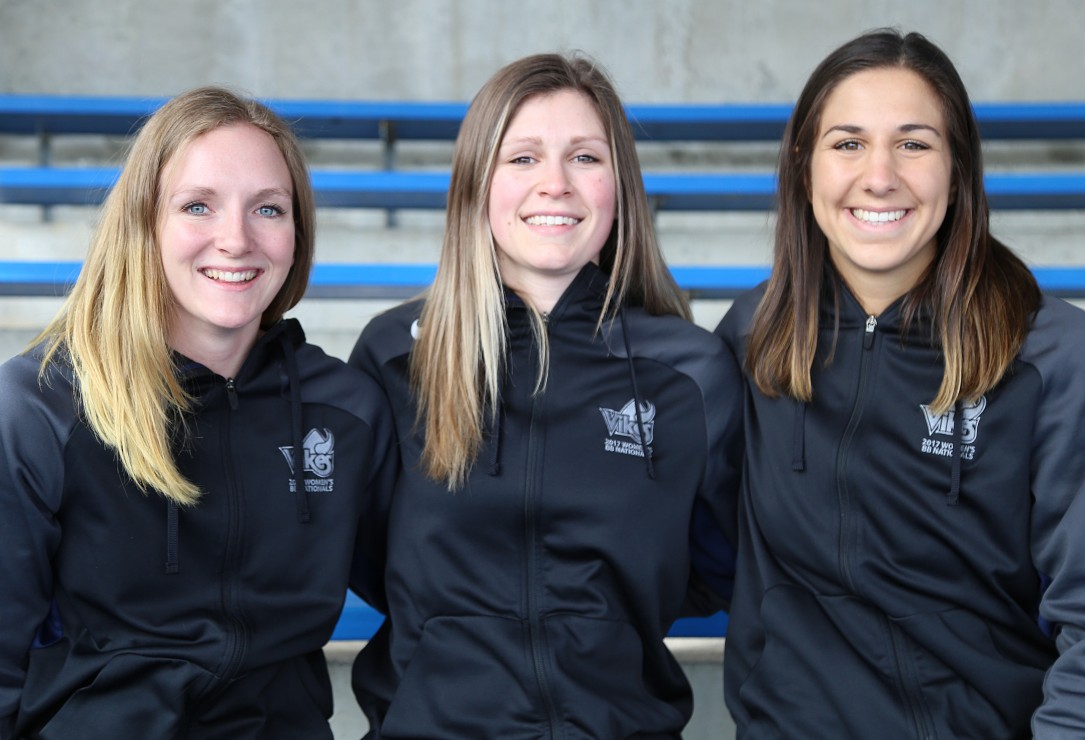 From left to right: Jenna Krug, Nicole Karstein, and Jenna Bugiardini are all saying farewell to the Vikes women’s basketball team as they come to the end of their time at UVic. Photo by Belle White, Photo Editor

It wasn’t too difficult to find a time to meet with Vikes basketball trio Jenna Bugiardini, Nicole Karstein, and Jenna Krug. With their final season of university basketball having come to an end a few weeks ago, the three fifth-years were beginning to realize just how much free time they had on their hands.

“It feels like real life is starting now,” laughs Karstein. “I’m not prepared for that yet.”

All three joined the Vikes back in 2013, during a massive transition period for the women’s basketball team. Since then, they’ve played key roles in a Vikes team that made the Canada West playoffs for each of their five years in the program.

“There was no consistency when we came into the program,” said Bugiardini, referring to when the Vikes had three different head coaches in three years. “[But] for us to be able to host nationals? That, I think, speaks a lot to how much our program has grown in the last five years.”

Bugiardini, Krug, and Karstein have all grown along with the program. It’s rare that three players will play together for the duration of an undergraduate degree, and even rarer that those same players are the first names on a team sheet. The bond between them is evident, and head coach Dani Sinclair is the first to say how much she will miss having them around.

“They exude anything you would expect of a player,” said Sinclair, speaking after the Vikes’ final game at the USports National Championship. “They have grown in the time that they have been here as well which I think, as a coach, is really special to see.

“They come in as 17, 18 year olds, and they leave as young women ready to go onto careers. To see their growth, as players for sure, but as people — [that] is probably the most special thing.”

But despite their personal success and growth as basketball players, Karstein, Krug, and Bugiardini found team success with the Vikes hard to come by. The trio have made the Canada West playoffs every year, but so often fell short of making it to nationals. Three times they lost in the quarter-finals, and their foray to the semi-finals in 2015 ended in defeat.

Which is why the 2017 USport National Championships were so special. The top university women’s basketball teams in Canada travelled to the tournament hosted by the Vikes, and it offered the trio their first and final opportunity to prove themselves against the best.

“It was really cool,” said Karstein. “It was nice to be able to end at nationals, and be able to make it the whole way and have the whole community supporting us . . . I couldn’t ask for a better way to end my career than to have that experience.”

Unfortunately, both games at nationals ended in defeat for the Vikes, but it’s not the result that Bugiardini will take away with her.

“We obviously wanted to win. We played hard. I think we all played our hearts out, and that’s what we wanted,” Bugiardini said. “The result isn’t the greatest, but, at the same time, just to experience that atmosphere and to get to be with the top teams in the country — that was really cool.”

“I had so many people tell me how amazing that Thursday game against Carleton was and how much fun they had,” Bugiardini continued, referring to a game where the Vikes narrowly lost to the top-ranked team at the championship. “There was so much excitement from it, and that’s what I’m going to remember — not the winning or the losing.”

There’s no question the Vikes will find it difficult to compete at the same level without three crucial starting players, but to what extent they will struggle remains to be seen. Will the next generation of players be able to live up to the high, high bar set by the trio?

“Hopefully we’ve somehow taught them how to adjust to it all,” said Karstein, “from how we adjusted going into our fourth year.”

“If we’ve done our jobs,” Krug assured, “they should be ready to handle it.”