Through the Looking Glass

All photos by Sarah Lazin

There are times in a city when you find yourself removed into another world. Yet, never has this experience been so accentuated as when two curious reporters visited the self-proclaimed Super InTent City in the heart of downtown Victoria. Stepping through the break in the hedge which neatly encompasses the once-empty lot behind the Courthouse, the moral firmament of Church of Christ Anglican looming at our backs, we found ourselves in a village green of old.

This is a place of active protest against the failure of provincial and federal forces to adequately address homelessness in Canada, but it is also, perhaps even more compellingly, a testament to human resilience and compassion. Those for whom the laws of society no longer apply have created their own order, one that offers them a safe space, a sense of belonging, a modicum of respect, and a concern for their well-being some of the residents have probably never before experienced in their lives.

Thules and Uma Galis perform a song of gratitude for “everything and everyone” present at the open house on Jan. 16. 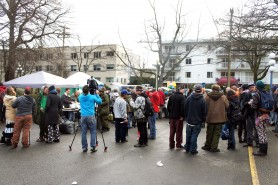 The sheer diversity of residents was humbling, consisting of “ . . . geniuses, artists, rebels and wallflowers,” as visitor Joey Schindle, himself a member of Victoria’s homeless community, remarked. “A chunk of them are trying to make a point and some are just lost people.”

In addition to homes, this city has created its own socio-economic resources including a fully functioning kitchen, powered with fuel donated by Church of Christ Anglican, and the free store with books, clothing, shoes, and other amenities. 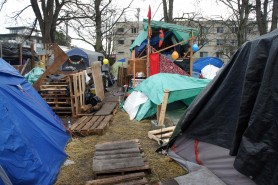 While the majority of the shelters are an amalgam of tents and tarps, there are more complex structures built from scavenged scraps, including this stilted platform built for Christine Brett by other community members. 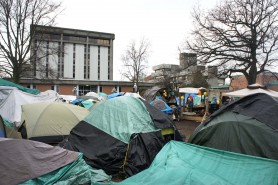 Many aspects of the Super InTent City more closely resembled our own homes than somewhere foreign: welcome mats and muddy boots left outside the tents, carefully sorted recycling bins, and bright notes of individuality dismissing bleaker realities. Above all else, we were taken aback by the sheer cleanliness and order, the pride in construction, and the great care taken in providing for the most marginalized within their group (namely, a 16-year old girl).