Throwback Thursday: Engineers are what? 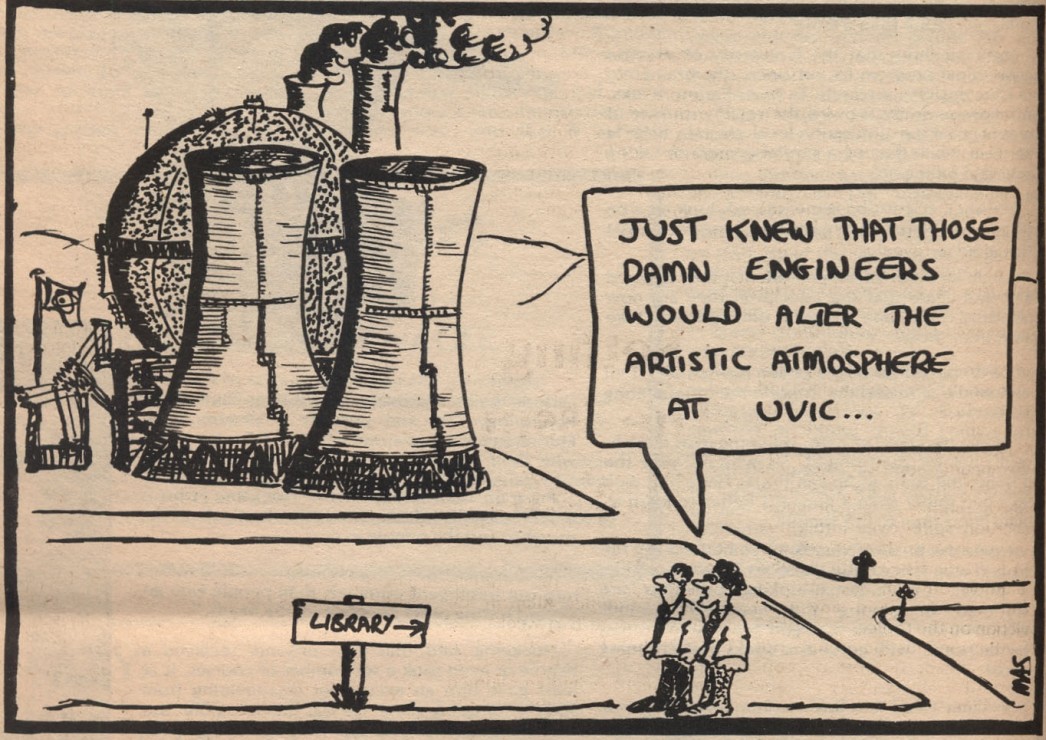 Okay, this comic from Oct. 23, 1980, was a little bit off the mark. By Martin Ashwood-Smith/The Martlet

Engineers: love ‘em, hate ‘em, literally can’t live without ‘em. Plus there’s that unique reputation that precedes them. Just think back to rush week and those crazy buzzcuts, or their incredible turnouts to campus-wide pub crawls — and don’t forget the twenty-four-hour access to their building for those late night cram-sessions.

However, back in our Oct. 23, 1980 edition, the reputation of engineers raised quite an issue for UVic’s almost entirely liberal arts community. Martlet alumni Brenden B. Read wrote an article outlining the advantages to bringing them to our campus, which back then lacked an engineering, business, and medical school. At the time, it caused quite a stir.

Read acknowledged that Victoria is an attractive city for residents, is the centre of parliament for the province, and implementing a program at UVic would mean less students would have to leave the island to study on the Lower Mainland.

Other arguments he stated were that in B.C. “engineers are needed more than most other universities majors.” Of course, this would have been hard to hear for an entirely liberal arts university.

“Anyone who things the ‘character of UVic’ will disappear just because a mere estimated 950 engineering students are added to the campus has a poor opinion of UVic’s strength in character,” Read said.

To keep up with changing times, he argued that both liberal arts and practical studies were necessary on campus, or else the university would border on the brink of irrelevance.

“Given the trends in university enrollment nationwide,” Read said, “there is no logical reason to assume that the trees on campus are going to disappear in a mass of steel and concrete and that the busses will become crowded to the point where Victoria has to build a subway out here.”

Of course, not everyone in 1980 had a warm welcome for this new-addition to the UVic famjam. Edward J. Parkinson went so far as to say “engineers are real assholes and I don’t think anyone really wants them here.”

His main qualm: “It’s getting harder and harder to carry on a good liberal arts conversation with anyone around here anymore. So let’s just keep the engineers out of UVic.”

Hugh Dyer also responded by stating Vancouver is “an ideal location for engineering firms.” It’s a central location that remains close to the interior.

According Dyer, UVic needed to “continue to concentrate its efforts at producing the kind of academic environment that will ensure that graduates have a sound knowledge of man, his society, culture and environment, and will thus be able to make the crucial decisions and solve the difficult problems that an age of technology force upon us.” 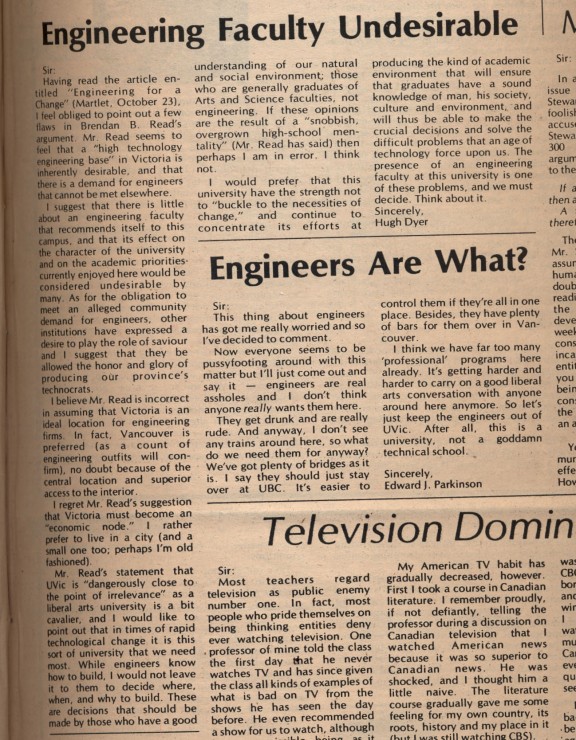 via The Martlet archives

Over thirty years later, do these representations stand the test of time? What do current students think of engineers and the engineering program?

“They’re crazy. I feel like they just get really stressed out to a certain point where they just do a bunch of crazy things around campus to relieve stress.”

“They work so hard. Of all the engineers in my dorm, none of them ever slept. I think they had something like 16 hours of studying to do after all of their classes and then an exam every day until the end of the semester.”

“My roommate is an engineer and she is in the biomed program. I’ve never seen anyone work so hard in my entire life. She never has any time just to hang out and I feel so bad, but I guess at the end of the four years it’ll pay off.”

“I really admire engineers. I think they’re very intelligent. I feel this way because most of the people I know in engineering dropped out because it was too difficult.”

“They’re important for developing and everything. I don’t know too much about engineering, to be honest. My roommate’s an engineer and they work hard, they work really hard, and the engineering program seems really intense.”

“It’s really tough. You have to put a ton of work into it. It’s interesting to me — there are a lot of cool details where it’s tangible and I can kind of see how things work . . . I think that a lot of those details are really cool but a lot of the really tough parts about it can make it kind of annoying and really stressful. Just passing is a struggle, but at the end of the day you see engineers going out and working for AIrBus and things like that. If they make a slight mistake on a calculation it can be like billions and billions of dollars, and you know, debts for the company and stuff like that. So they really push you for sure, but it’s because I think the profession is really important for a multitude of different companies, just around the whole spectrum around business and government too.”