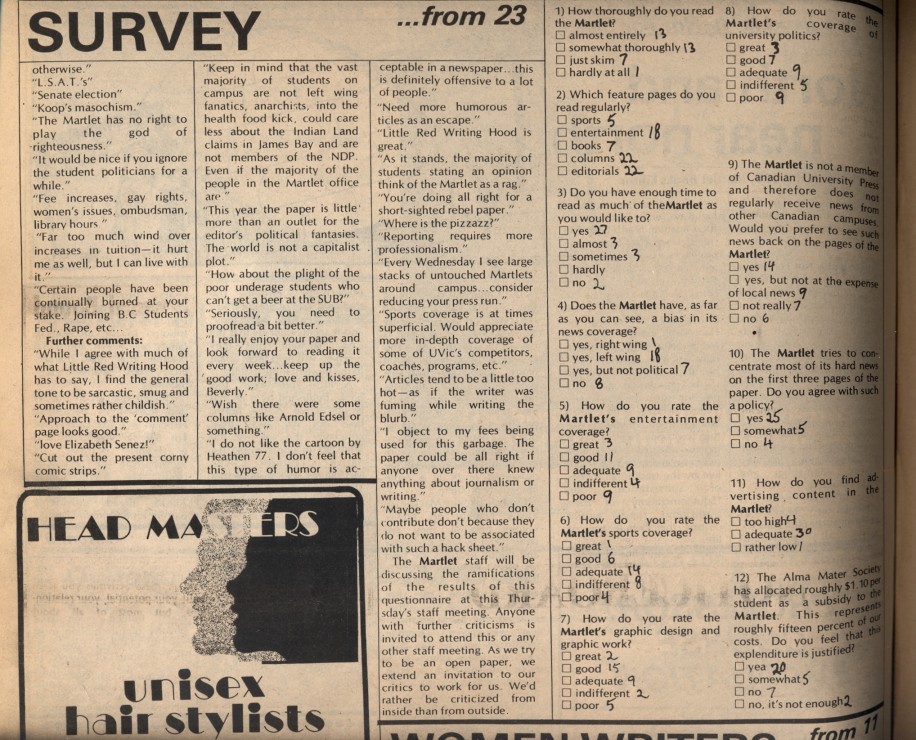 Readers had some choice words for us back in the day. Have things changed? Time will tell. Image via Martlet archives

It’s hard breaking campus news — we’ve got to keep reader interests at heart and step on some toes in the process, which can leave us with some criticism. So did we live up to reader’s expectations in 1977?

According to the results of a poll we published in our Nov. 17 issue, that depends. While most of the respondents said they read the paper “almost entirely” or “somewhat thoroughly,” people also felt we had a left-wing bias or, to the shock of our staff, nearly no bias at all.

Yet, our editors scored low on coverage of university politics, and a lot of students felt torn between wanting articles from campuses across Canada or sticking strictly within the ring.

Our entertainment and sports sections were considered between “indifferent” or “adequate” while our graphics department was rated “adequate, but barely, on the average” (ouch, guys).

Back in the day, students paid just $1.10 of their student fees for the paper (currently just $3.75 a semester for full-time students); one reader went so far as to say they “found it a shame” to pay for a “disgraceful, juvenile paper like this.”

According to readers, our promotional and advertising content was too high, too low, and also adequate — but two respondents ensued that “advertising is a necessary capitalist evil” while someone else felt it didn’t relate to the student demographic (even though the same issue featured beer flyers and condom ads).

When asked which stories they wanted to have covered in the Martlet, one responded said more interviews of “interesting people,” and another wanted to see what “different departments have to offer.”

On which issues have been overdone, one student commented, “Far too much wind over increases in tuition — it hurt me too but I can live with it.”

Of course, students had a lot more to say in the comments box;  just take a look below on some of the best:

“Keep in mind that the vast majority of students on campus are not left wing fanatics, anarchists into the health food kick, could care less about Indian Land claims in James Bay and are not members of the NDP. Even if the majority of the people in the Martlet office are.”

“I really enjoy your paper and look forward to reading it every week . . . keep up the good work; love and kisses, Beverly.”

“How about the plight of the poor underage students who can’t get a beer at the SUB?”

And my personal favourite, “I object to my fees being used for this garbage. The paper could be all right if anyone over there knew anything about journalism or writing.”

What do we have to learn from our 1977 editors? We still have a ways to go before we’re perfect. But if you’ve got opinions, we want to hear them, so keep an eye out for a new poll in our upcoming Dec. 1 issue.