These past 12 months have been hectic for most of us, and the UVic campus was not spared from any of the chaos that 2017 brought. Although the Martlet’s top stories this year are generally unrelated to one another — there doesn’t seem to be anything connecting articles about international tuition fees, dress codes at the gym, and an anti-abortion rights demonstration — we can still draw one conclusion from 2017’s most-read articles: students on campus were riled up.

At a time when the apathetic student narrative is so often peddled come every federal and provincial election, it’s refreshing to see that at least at a university-level, students are still making noise on the issues that matter to them. 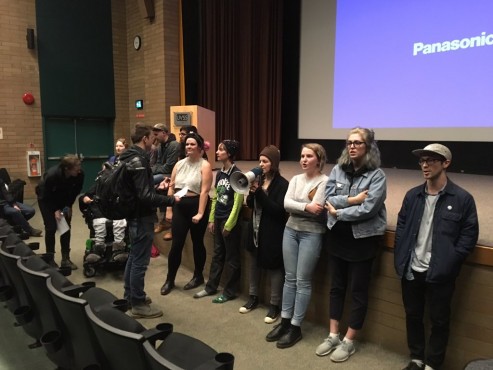 In the most-read story in the history of the Martlet website, thousands of readers on UVic and across the world tuned in when a presentation from philosopher Peter Singer split the campus in two. Singer was speaking over Skype on “Effective Altruism” — the concept of doing the most good with an individual act of advocacy — but students argued that Singer’s view on euthanizing babies with disabilities meant he shouldn’t be allowed to present on campus.

As the parties running for student government set up shop on either side of the debating line, protesters crashed the Singer Skype talk. The internet took note, and 30 000 readers latched on to our story amidst a larger discussion of campus politics and free speech.

In a year dominated by Trump’s discussion of border security, the most notorious wall on campus was one built by the Third Space, UVic’s feminist collective and advocacy group. Erected outside of the SUB, the wall asked students, “How do you challenge White Supremacy?” and invited them to write their responses on the wall itself.

Just two weeks after the Peter Singer debate, students were again divided. While some took the opportunity to engage in important conversations about race in Canada, others vandalized the wall with swastikas and other Nazi slogans and symbols. The wall was eventually taken down by Campus Security, but not before prompting a response from a collection of UVic professors who highlighted the vandalized wall as a reason why UVic needs to press ahead on its anti-racism work.

As opposed to the previous two stories that garnered a large amount of student and media attention, #3 on the Martlet’s top stories of 2017 was defined by the lack of response it received — despite its importance.

On March 28, the UVic Senate approved a motion to increase international students’ fees by four per cent, effective May 2017. The fee raise, said UVic president Jamie Cassels, was a difficult decision, but considering that any tuition raise for domestic students is capped at two per cent, students protested the motion as unfair.

A dozen or so students gathered outside the Senate chambers in an attempt to stop the motion, but unfortunately for protestors, the university still moved ahead with it.

Our most emotionally resonant story from 2017 was actually two stories — one ignored, another unignorable.

The first story was from April 28, when the Martlet reported that the UVSS Board of Directors was switching to a health plan with less coverage in order to offset a deficit. The article went largely unnoticed — as did an email sent a few months later by Studentcare, informing students of the change. The problem was the email’s subject line: “Register for Pharmacare for a chance to win a $50 Visa gift card.”

The many students who disregarded the email as spam were later incensed or distraught when they were finally made aware of the change, and for some, the change severely impacted their lives. Lilia Zaharieva, a student in the Child and Youth Care Program, did not read the email, and is now inadvertently footing a $250 000 bill for her cystic fibrosis medication that is no longer covered by the UVSS. The UVSS took the blame, and now must pass a

referendum in the spring in order to get more money for a different health plan.

Our story about the Trutch Residence reflected years of student advocacy finally coming to fruition. Student Lisa Schnitzler’s petition to change the name of the residence was not the first to ask the university to rid itself of the name of Joseph Trutch, the nineteenth-century politician and unabashed racist for whom the building was named. It was, however, the first to be successful.

After Schnitlzer drummed up some media attention on campus and enlisted the support of the UVSS, UVic finally passed a motion at the May 30 Board of Governors meeting to remove the name and call the building “Lansdowne Residence #1” in the interim, pending a consultation regarding a new name. 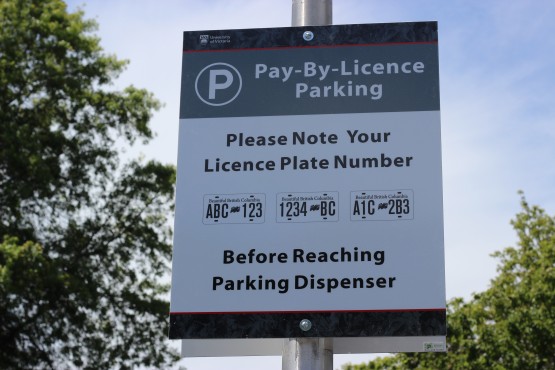 A photo of the new signs informing UVic parkers of the changes. Photo by Cormac O’Brien, Editor-in-Chief

Sometimes you need huge, sweeping cultural shifts in order to draw people together and create a unified bloc of voices and opinions. Other times, all you need to do is make parking more expensive.

In June, UVic announced their plans to change the parking system and require parkers to input their license plate number when paying for parking. As a result, day tickets could no longer be shared. The UVic community felt the loss of the powerful and friendly gesture, and voiced their displeasure online. Nothing changed from the university, and any efforts to revert the system have — ahem — stalled.

2017 gave us many great new terms: alternative facts, cash me outside, and, of course, gluteal folds. The term refers to the bottom of the bottom, and it was banned from sight as per CARSA’s controversial new dress code.

The code became a talking point after Luiza, a UVic student, shared her story with her thousands of Instagram followers about getting kicked out of CARSA as her gym shorts broke a new dress code. The story split commenters, some of whom argued that the gym can enforce whatever dress code they want, while others called the constraints misogynistic and illogical. Others again accused CARSA of responding to the issue of sexual harassment at the gym by making women cover up more. The gym vehemently denied the claim, saying the change was a regular “tweak.” Following this, CARSA did at least update their code of conduct to explicitly ban sexual harassment.

UVic again found itself representative of a larger campus trend when it became the latest Canadian university to find racist and anti-Semitic posters on cork boards around campus. The posters became a talking point on Facebook, when a picture of one of the posters was shared hundreds of times. The university responded, informing the community that they were investigating the issue. Social justice organizations across the country also condemned the posters.

While some people online claimed the posters were put up by “leftists” for some unknown reason, most people thankfully condemned the hateful message for what it was.

Referendums and student elections are usually characterized by low turnouts and disappointed advocacy groups, but the Anti-Violence Project referendum proved that a well-run and well-advertised campaign could cut through the apathy. 21 per cent of students voted in the referendum, the highest turnout since 2013, and 74 per cent of those students voted in favour of providing the anti-sexualized violence advocacy group an additional $2 per student per semester.

According to the group, the money goes towards anti-sexualized violence workshops and more staff at the centre itself. After months of major news outlets reporting on the #MeToo movement and the sexualized violence experienced at the hands of politicians and Hollywood elites, it was clear that the UVic community was happy to contribute to solving the highlighted problem at a local level.

The university campus was quiet on the morning of Nov. 16, as UVic students were starting to trickle back onto campus from their reading break. They wandered back into a bitter political debate, however, as Youth Protecting Youth (YPY), UVic’s anti-abortion rights club, held a demonstration in the library quad.

The demonstration entailed the planting of 10 000 small flags in the quad, each representing 10 abortions performed in Canada each year. Most passers-by didn’t realize the meaning of the flags, but as soon as they did, arguments broke out as YPY members and counter-protesters mingled. The flags were eventually taken down by a small group of counter-demonstrators and the year concluded as it began: with students debating the question of free speech and demonstration.

The issues of free speech, student apathy, and social justice will undoubtedly pop up again in 2018, just as they did in 2017. And, just as we’ve done this year, the Martlet will be there to report on all campus goings-on as they happen. Thanks for a wonderful year of news reporting, and here’s to yet another!