Turn up for Speed-the-Plow

What better way to celebrate a birthday than with corruption, misogyny, and betrayal?

It’s the Belfry Theatre’s 40th anniversary season, and the first show on the program is Speed-the-Plow, by famed American playwright David Mamet. I attended on opening night, Sept. 17, which was packed with sponsors and long-time supporters, and it looks like the Belfry is in for another successful year.

Speed-the-Plow (the title comes from the expression “God speed the plow”) centers on Hollywood studio executive Bobby Gould. Brian Markinson, known for his film and television work, commands the stage as Bobby in his Belfry debut, and Belfry alum Vincent Gale captures the funny desperation of colleague Charlie Fox, who brings Bobby a golden opportunity: the chance to work with a mega movie star. 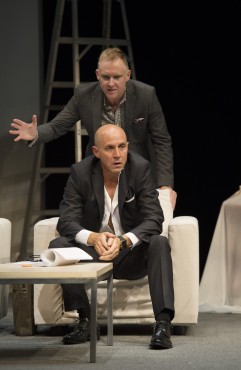 Charlie and Bobby’s foil comes in the form of temp secretary Karen (Celine Stubel), who would rather push for an insightful art film Bobby had dismissed. The male characters exude a casual sexism bred from their jaded lifestyle, and Charlie bets Bobby a thousand dollars that he can’t get Karen to sleep with him. The insincerity of Bobby’s goals from that point forth made it hard for me to be compelled by or invested in him as a protagonist.

Tension comes from contrast between characters. It’s fun to see Bobby tortured by Karen’s earnestness. After an evening in Bobby’s living room — the turning point in the story — Karen leads Bobby to a crisis of self, but ultimately she’s written as a device to serve his character arc. Mamet penned Speed-the-Plow as satire after his disillusioning first experience in Holly-wood, so this could be some very meta commentary. It could equally be inability to write a fleshed-out female character. Stubel (paired to great success with Gale in last season’s Venus In Fur) isn’t given much range to work with.

Much about these characters is artificial — even naïve Karen is mysterious in motivation and origin — and so moments of honesty are that much more distinct. One particular outburst from Charlie, in which he unintentionally reveals his fears, stands out in this sense. However, Mamet’s back-and-forth dialogue lacks poignancy, and its esotericism could alienate viewers.

The set by Shawn Kerwin is populated with modern, monochrome office furniture that matches the characters’ pretension. But the best thing about the set, and the highlight of the show for me, is the dripping paint can under the coffee table in an otherwise spotless room. Later, a ladder and drop cloth appear. While Bobby’s office is literally new and incomplete, these touches provide subtext for the theme of façade. Falsehood and reality exist on the same plane.

Director Michael Shamata has created a consistent sense of place — we feel fully immersed in the world — and the costume design, smooth jazz music, and slick set rotation compliment the aesthetically pleasing way Speed-the-Plow is staged.

It isn’t my favourite play, but this production is energetic and provocative. Here’s to another forty years at the Belfry.

Speed-the-Plow plays at the Belfry Theatre until Oct. 11. Visit belfry.bc.ca for details.