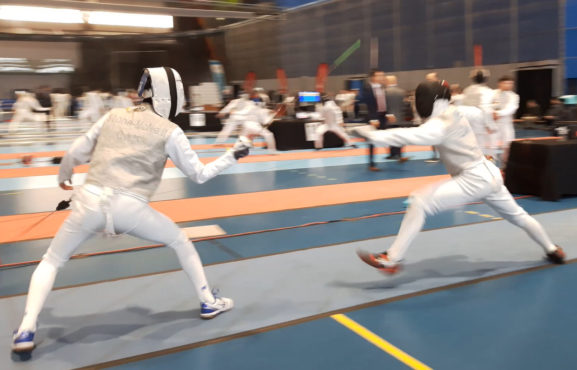 Equal parts technique, raw power, and energy, competitive fencing is a scarce art at UVic. But for the first time in recent years, two UVic students had the opportunity to fight among the ranks of Canada’s top fencers.

From Jan. 25 to 27, third-year students Susanna Fong and Kaimin Wang joined over 385 advanced fencers — with ages ranging from 12 to above 70 — to compete at the 2019 Fencing Canada Cup in Richmond, B.C.

Although it was their first national level tournament, Fong and Wang both conveyed their interest in taking on the Canada Cup as a challenge and learning experience unlike any they had previously experienced in local tournaments.

“Competitive fencing at UVic currently is kind of a new trend, it’s been gradually growing,” said Orion Stone-McNeil, the private coach for Fong and Wang who also volunteers as one of the coaches for UVic’s Fencing Club.

“Their performance at this tournament was meant to introduce them to the rigours of national level fencing, technique and skill of other fencers across the country, and identify areas of improvement and growth in their own ability.”

The Canada Cup is an annual nationally-ranked tournament held in different locations across the country, with many individuals competing from (or with hopes of joining) the Canadian national team. This competition is a stepping stone to international fencing, and can put high-performance fencers into the circuit for the Olympics.

“Everybody is competing from an advanced to an olympic level — it’s just so intense,” said Fong, who has been fencing since the second grade.

Some fencing clubs brought large delegations, Fong said, including a group from Toronto with about 50 fencers.

Despite the highly competitive energy, there was a friendliness to the atmosphere as well. In between bouts, fencers compared warm-ups, discussed their preferred types of gear, swapped pre-match routines, and caught up with old friends from previous tournaments.

Though there’s interest from the UVic Fencing Club’s head coach in developing a competitive approach to the club, this undertaking is in early stages.

Wang and Fong trained hard over the past few months for their first national competition. Although the UVic Fencing Club, which they are both a part of, is recreational, they also trained with Stone-McNeil two to three days a week for an hour or two in the lead-up to the Cup.

Due to limited resources dedicated to competitive training at UVic, it can be a challenge for fencers to hone their skills for high-level tournaments, said Stone-McNeil. Though there’s interest from the UVic Fencing Club’s head coach, Caleb McIntosh, in developing a competitive approach to the club, this undertaking is in early stages, according to Stone-McNeil.

Both Fong and Wang went into the Canada Cup to gain experience and challenge themselves against fencers outside their own club.

“I think they both did rather well having never competed at this level before,” said Stone-McNeil. “This was mostly a learning experience for them, so they have an idea of where they want to improve and help create a target to reach for future events.

“Overall, they did quite well having competed against some of the strongest fencers in Canada, and the most important thing is they all had fun and they were motivated to do better after.”

Wang, who started fencing two years ago, outpaced two of the three other B.C. fencers to place 14th in the U23 Men’s Foil event. This was his second tournament, and although Wang said he felt inexperienced against many tough opponents, the Canada Cup made him aware of ways to improve his skills.

Fong competed in the Senior Women’s Foil event, where she placed 29th. Like Wang, she felt the Canada Cup was a fun and informative experience, and intends to return next year and improve her score. In the meantime, she is looking to prepare for upcoming local tournaments and the National Championships.

Stone-McNeil feels that representation of UVic students in the national circuit is key to demonstrating an interest in growing the competitive fencing community not just at UVic, but across Vancouver Island.