Centre 6 shows signs of cracking with possibility of closure

A missing van. Rumours of the UVic administration looking for ways to fire union workers. Children making posters imploring UVic to “save Centre 6.”

According to a staffer at UVic’s Centre 6, these occurrences were part and parcel of their job at the child care centre this past year.

Centre 6 is part of UVic’s child care infrastructure. The centre handles after-school care for children ages six to 12, but its future is in limbo after an announcement from the university last summer, saying that the centre would close its doors in June 2017. The university later backpedaled on the decision pending consultations, leaving the centre’s future in the lurch.

The staffer, speaking to the Martlet on condition of anonymity, said the uncertainty hangs over the centre and makes for a “tense” atmosphere that is palpable each time they go to work; affecting the staff, the parents, and the children as well.

“I have to go to an environment to work in that’s so — I don’t know — angry and frustrated and confused and stressed every day,” said the staffer, “and listen to those arguments, and those conflicts . . . It’s tough.”

In an email to the Martlet, Paul Marck. UVic associate manager of public affairs, said it would be “inappropriate” for UVic to comment on anonymous comments, but stressed the importance of staff reporting their concerns.

“UVic values all of its employees and urges anyone with concerns to bring them forward to their supervisor, union, or to human resources or the Office of Equity and Human Rights to deal with informally or formally under the applicable university policy,” Marck wrote.

A casual worker, the staffer was hired after UVic’s summer 2016 announcement but was never officially informed that the centre’s future was in doubt. It was only upon hearing the discussions between other staff members that they realized the concerns around the centre.

“Honestly, since [I was hired], that’s all people talk about,” the staffer said. “It causes a lot of tension at the centre. The full-time staff, especially the ones that have been there for 10 or 20 years, this is their life — so this is everything they talk about.

“I’d say it’s talked about every single shift that I’ve been there.” 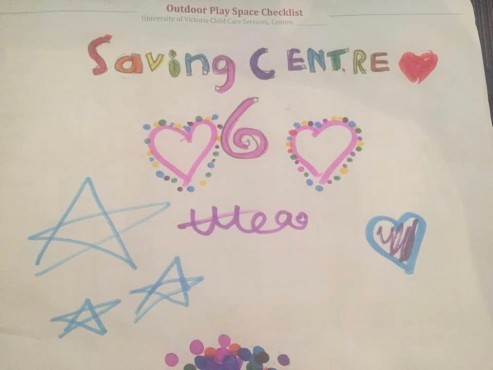 This photo provided by a parent at Centre 6 shows a poster made by one of the children at Centre 6.

There have been seven consultative meetings between the University of Victoria and the Faculty Association since January 2017, as both sides attempt to find an acceptable resolution to the Centre 6 situation. However, the Martlet has been informed there are still no updates from the consultations.

“[UVic and the FA] are hoping to bring a successful conclusion to consultations as soon as possible,” said UVic’s Marck. The FA has not replied to any emails at time of writing.

With such little information coming from administration, the staffer admitted rumours and gossip were quick to take root and flourish.

The anxiety at the centre has not gone unnoticed by the children, despite the staff’s best efforts.

“We have 45 minutes before we do pick-up that we do preparation at the centre, and in that time we usually have a staff meeting,” the staffer said. “And so, in that meeting, someone brought up the fact that the kids were starting to make signs, posters [that said] ‘Save Centre 6’ and ‘We Love Centre 6.’”

Staffers were told that the kids could talk about whatever they wanted but UVic employees weren’t allowed to make their own political statements about the future of Centre 6 in front of the children.

“For a lot of [the Centre 6 staff] this is their full-time job . . . they’ve created their life around this, and they’re not even allowed to take a position on what their future looks like,” said the staffer. “So I assume that it would be very, very difficult for them to not talk about it with parents and take a position.”

Even with consultations ongoing, the staffer said small gestures made it hard to believe the university were seriously considering keeping Centre 6 open. One of those gestures was a perceived hesitance on the part of the university to give Centre 6 a new bus for transporting kids.

The university confirmed they had placed an order for a new van some months before discussions about closing Centre 6 had begun. But then UVic made their initial June 2016 decision to close Centre 6.

And the van didn’t show up.

Then, in October, an email was sent from Kim Ainsworth, manager of UVic Child Care Services, to parents informing them that due to the centre’s closure, the van was being sold. Five days later, Jim Forbes, Director of Campus Services and Ainsworth’s boss, emailed the parents and apologized. In the email, Forbes apologized for referencing the centre’s closure as a fact, writing that the university was “committed” to the consultations with the FA.

But the van still didn’t show up.

“The parents were [asking UVic] like, ‘if you guys are actually in consultation [with the FA], why won’t you give them the van?’ Because if you’re in consultation, there’s a chance that we’ll need the van going into the next school year,” said the staffer. “So if you’re telling us [we] don’t need a van, then you’re not in consultation.”

Centre 6 were finally able to use the van in late November 2016, but the affair left a bad taste in many of the staffers’ mouths.

“I just feel like all the connotation and all the words and all the statements were all like, ‘we’re closing still,’” the staffer said.

LeAnne Golinsky is a parent at Centre 6 and a member of the UVic Child Care Alliance, a group of parents lobbying the university to keep the centre open.

“You’ve got union employees that are going to be losing their jobs … You’ve got casual employees that have not ever been officially given notice that the centre’s going to close,” said Golinsky, speaking to the Martlet in January. “You’ve got parents that don’t know what it is that they’re going to do. You’ve got grad students that can’t make plans. It’s really an upheaval.”

“We’ve had, over the year, probably four or five kids leave because they are scared that they’re not going to get a spot in another out-of-school care,” said the staffer. “But [other parents] don’t want to pull their kid out of Centre 6 because it could be open next year and then they lose their spot. It’s just insane.”

A UVic spokesperson said that fluctuating numbers in children at the centre “[happen] every year.”

Emailing the Martlet back in late April, Marck wrote that as soon as consultations with the FA were completed, UVic would begin consulting with staff and students before bringing forward a recommendation to university administration.

For now, Centre 6 is still in operation. But, for the staffer, the centre just doesn’t feel the same.

“I think that we put a good face on,” the staffer said. “But for me, for the after-hours and for being there before shifts and talking to coworkers — it’s just tense. Everyone’s walking on eggshells.”