UVEC brings out the best in student engineering

This past Saturday, UVic engineers gathered in ECS to compete in UVEC, the University of Victoria Engineering Competition. The one-day event, consisting of team competitions in various disciplines, was a qualifying event for regional and national engineering competitions.

This summer, competitions included re-engineering (transforming an object), debate, senior design (creating an object from provided parts), and consultations (creating a solution to a theoretical problem like the feasibility of light-rail transit in Victoria). UVEC will be held again in the fall, and will include more competitions like junior design, which will accommodate the incoming first-year engineering cohort.

Christina Saimoto, the VP External for the Engineering Students’ Society who is completing her second year of civil engineering, says that the competition is a chance for engineers to show a different side of themselves.

“A lot of the time we keep to ourselves, spend a lot of time studying around [ECS], a lot of time on laptops, and it’s really interesting to kind of see people engage with each other and working as teams and really committing to engineering practically.”

The winners of the summer and fall iterations of UVEC will go onto the Western Engineering Competition, which will be held in January 2016 at UBCO. 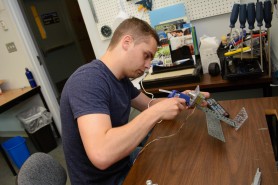 Michael Funk is part of a three-person team building a wheeled robot that follows a line of electrical tape on the ground autonomously. A sensor on the robot discerns its path by measuring reflected IR light. (Photo by Hugo Wong) 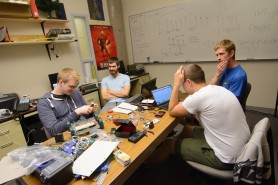 (Clockwise from left) Dylan Reimer, Gregory Perry, Glen Parry, and Alex Doknjas work to build a wheeled robot that follows a line of electrical tape on the ground autonomously. (Photo by Hugo Wong)