As students returned from reading break on Nov. 17, flocking to Mystic Market and filling the air of the University Centre with chatter, UVic announced a serious donation to increase research into sustainable energy.

The $2.4 million dollars — $1.4 million from the Government of Canada and $1 million from the Dennis and Phyllis Washington Foundation in conjunction with Seaspan — will provide the necessary funds to help UVic researchers study renewable marine-based energy: energy from ocean tides, winds, and waves.

The announcement was made by UVic president Jamie Cassels; mechanical engineer and UVic professor Brad Buckham; Seaspan vice-president Joe O’Rourke; and Jonathan Wilkinson, Member of Parliament for North Vancouver and Parliamentary Secretary to the Minister of Environment and Climate Change, on behalf of Navdeep Bains, Minister of Innovation, Science, and Economic Development and Minister responsible for Western Economic Diversification Canada (WD).

“As we tackle the many challenges posed by climate change, our researchers are leading the way in sustainable energy research, working closely with governments, industry and community groups to foster clean growth and low-carbon development,” said Cassels at the announcement.

The Government of Canada’s $1.4 million investment will establish the Pacific Regional Institute for Marine Energy Discovery (PRIMED), which will be led by mechanical engineer Buckham. This initiative will help develop and commercialize renewable energy technologies and help support alternative energy solutions for coastal and Indigenous communities that rely mainly of fossil fuels. 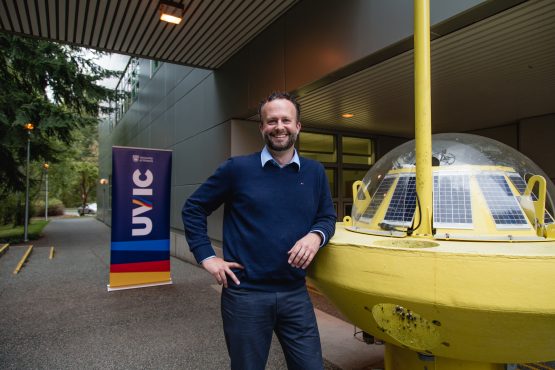 Brad Buckham, mechanical engineer, professor at UVic, and head of the newly established PRIMED, poses with a piece of machinery. Photo provided

“The average wave energy transport off the B.C. coast is over 30 kilowatts in a single metre of wave crest,” Buckham said. “That’s the power capacity equivalent of 15 homes, each with two teenaged children that are simultaneously microwaving snacks, charging their phones, watching TV, listening to radio, Snapchatting their friends, and running the shower on hot.”

“We’re very grateful to the Dennis and Phyllis Washington Foundation and Seaspan for their investments in this vital work, which responds to one of our most significant national and global challenges,” said Cassels in the press release.

The announcement of this initiative comes just 13 days after a Nov. 3 Tyee article titled “UVic Seeks to Profit from Corporate Climate Change Deniers,” which admonished UVic for their investments in fossil fuel companies like ExxonMobil.

“Not only has UVic refused to divest its $420 million endowment from fossil fuel companies; it has actually increased its oil and gas holdings since the divestment campaign began,” says the article written by James Rowe, a professor at the University of Victoria, and three other students.

“Of particular note is a 2015 $5.9 million investment in Imperial Oil, which is majority owned and controlled by ExxonMobil.”

When asked for his thoughts on the Divestment article, UVic President Jamie Cassels dismissed the story as unrelated to the marine energy announcement.