The University of Victoria has begun the planning process of a new residence building, built to address concerns about student housing in Victoria.

The project is the first significant housing venture from UVic since it renewed its Campus Plan in 2016, though the university recognized the need to alleviate housing concerns for students in its 2012 Strategic Plan. As per the university’s Campus Planning website, updated on the morning of Sept. 11 with information about the future building, consultations are scheduled for 2017, designs for the residence will be finalized in 2018, and then construction will take place in 2018 and 2019.

The project is still in an early stage, according to Director of Campus Planning Mike Wilson. 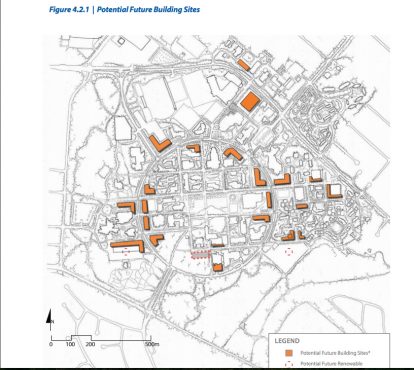 The location for the building has not yet been decided either, but the university has earmarked some potential sites; including in the CARSA parking lot, between the SUB and the Emily Carr residence building, and behind the McPherson Library. All potential sites are available for viewing on page 61 of the UVic Campus Plan.

“Part of the Campus Plan renewal process involved identifying a number of different sites on campus that might work for a modern student residence building,” the Campus Planning website reads. “These sites are currently being explored by the project team to find the best possible fit.”

The university guarantees all first-year students a place in residence, but with rising admission numbers and a pricy rental market that keeps people in residence (Kathryn MacLeod, director of UVic’s residence services, told the Times Colonist in 2015 that 30 per cent of students would like to return to residence after their first year) there is a constant need for more housing on campus.

“Building more student housing on campus is crucial to ensure that there is accessible and affordable housing for students,” says Anmol Swaich, director of campaigns and community relations with the UVSS.

“This would also relieve pressure on the low vacancy rate, which will, in turn, benefit community members who are also trying to find accessible and affordable housing. The state of the rental market right now is out of reach for both students and a lot of renters in Greater Victoria.”

The building will include several hundred beds, but specific room types have not been finalized. Currently, there are 2300 beds in single student housing and 181 family housing units on campus.

The university will host two pop-up consultation sessions in early October. On Oct. 3, from 11 a.m. to 2 p.m., a pop-up booth will be inside the Student Union Building. Cadboro Commons will host a similar pop-up booth at the same time on Oct. 4.

During these consultations, students will be able to recommend room sizes, furnishings, and other amenities to be available in the new building.