Rented at a market rate, students would have preferential access to the units 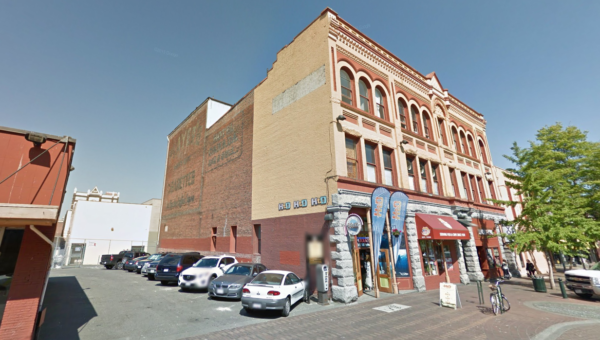 The properties on Broad Street that would be renovated and converted into rental housing. Photo via Google Maps

UVic Housing, a subsidiary of UVic that manages the university’s revenue properties, has struck a deal with Chard Development Ltd. to create 52 studio and one-bedroom units on downtown’s Broad Street. The press release announcing the move, published on June 2, indicated that UVic students will have the first chance to claim the units.

Because of the heritage aspect of the project, the City of Victoria’s approval process started with their Community Association Land Use Committee, a public consultation meeting held Thursday, June 8, and will go through several more steps including further public consultation before being approved or declined by Victoria City Council.

If given the green light, UVic will acquire a new building at the current site of a parking lot at 1312 Broad St. downtown for the 52 student-priority rentals. As part of the deal, Chard would purchase 1314 Broad St. and 1324 Broad St. (which includes 615-625 Johnson St.) from UVic. Chard would then redevelop their properties, the historic Duck’s building included, into a total of 103 market condominiums.

The 52 rental units will be available at a market rate.

Peter Kuran, President of UVic Properties, told the Martlet that selling two-thirds of the properties to Chard was the best solution to help UVic Properties finance the construction of their new rental property. Kuran says the resulting new rentals being retained by UVic will generate two to three times more income for the university than what all the properties are currently generating now.

Kuran says that construction will probably begin in spring/summer of 2019, and once completed, students will be able to apply for the units through the UVic On-Campus Housing portal. However, the units will not be the same as student housing, but rather market-priced rentals with graduate, third-, and fourth-year students given priority.

“What we’re trying to do is just make it easy for students to access a market rental unit building that is affiliated with the university, if that makes sense,” Kuran says.

The units will be an average of 460 square feet and be mostly studio apartments.

Kuran says he’s not sure if there would be time limits for occupants after they graduate, but expects it’s more likely they would be able to stay in the units while they establish themselves.

“We’d hate to kick folks out who graduate and then are just trying to get established because that’s also extremely difficult,” he says, but admits it is early yet to have put a lot of thought toward those kinds of questions.

Kuran says that it is also much too early to be able to provide costs for the project and negotiations with Chard are ongoing.

UVic Properties currently owns 46 residential units, eight of which will be replaced by the new development to will create a total of 90 residential rentals. The project is projected to be completed around 2020-2021.

The Broad Street properties were acquired by UVic in 2001 as part of the largest donation in UVic’s history by the late real-estate developer and philanthropist, Michael Williams. According to UVic, the assets had a net value of $17-million and included Swans Hotel, townhomes on Cadboro Bay Rd., nine city properties, and a large art collection.