UVic chemist teams up with Phillips Brewery for a better brew

What reaction do you get when you combine a UVic chemistry pro- fessor and the quality manager at Phillips Brewery while they sit down and have a beer? A groundbreaking yeast fermentation research project with the potential to revolutionize the craft brewing process.

UVic’s Fraser Hof and Euan Thomson, a chemist at Phillips Brewery, have been friends for years but couldn’t quite find a way to combine their skill sets in a research capacity. Now, thanks to the Natural Sciences and Engineering Research Council of Canada (NSERC), the two scientists will be teaming up to study the intricacies of yeast fermentation.

The breakthrough that kickstarted the project came out of an invention from Hof’s lab—the only one of its kind. “We created a tool for profiling the proteins in cancer cells,” said Hof. “And I realized that it could also be used to profile the proteins in brewer’s yeast.”

Beer goes through several stages before it can be poured into a pint glass. The process begins by mixing malt barley and hot water into the ‘mash,’ where the malt’s starch is converted into sugars. The mash is then filtered, separating residual solids from the ‘wort’—liquid sugars.

Lastly, yeast is added into the wort, fermenting the liquid sugars into ethyl alcohol and carbon dioxide, giving it the flavour and carbonation with which beer drinkers are familiar. However, yeast is a living organism, and so provides a different set of problems for brewers, the most common of which is aging. 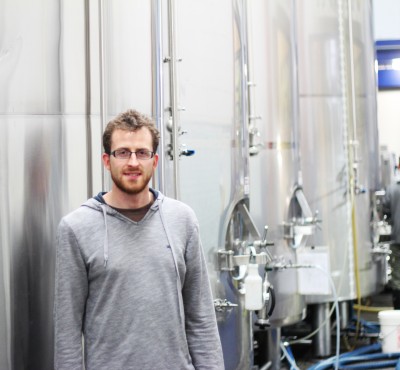 Euan Thomson, a chemist at Phillips Brewery, has worked with UVic chemist Fraser Hof to develop a new method to assess the age of yeast used in brewing beer. Photo by Alistair Ogden, Staff Writer

“Yeast [ages] over the course of many generations of fermentations and nobody really knows what the underlying molecular mechanisms of [aging] are,” said Thomson. This is a problem that has plagued brewers throughout history.

At some point between the 10th and 20th pitch of yeast, Thompson explained, the fermentation process begins to slow. To begin with, the slowing simply causes the beer to take longer to produce, but if the slowing isn’t monitored, the beer is liable to be off-flavour and thus wasted.

By studying the underlying molecular mechanisms that cause the yeast to age, Thomson and Hof hope to give brewers the tools to identify exactly when yeast is past its prime, saving time, money, and gallons of booze.

Thomson began taking samples of yeast back in April before the project was first funded. “We were optimistic,” Thomson admitted. “We thought we wrote a pretty good grant.” And they did, landing themselves six months of funding this September, with the potential for six more if all goes well.

Notably, this project is not simply a tool to streamline beer production but also has much deeper implications for Hof’s cancer research. “The whole idea is to lay the groundwork for something big to come afterwards,” said Thomson. “We want to prove the principle and see if there are any unifying factors between what’s going on in the yeast and what’s going on in Hof’s [research on] cancer cells.”

“It’s a slightly off-the-wall idea,” said Hof. “It’s definitely innovative . . . we’re the only ones with this particular tool, because we invented it. [And Phillips is] a very innovative brewery, so it’s a great partnership.”

However, the results of Thomson and Hof’s study won’t just be limited to this corner of Vancouver Island; the wider public and other brewers will have access as well. “We have a plan basically a year from now to have something that [Phillips] can implement in the brewery,” said Hof. “But, of course, if we find something interesting it’ll be applicable to everybody.”

When asked whether he’ll get any free beer out of the deal, Hof laughed. “I have chemistry professors who are friends who are jealous of that particular thing,” he said. “Not the research grant, not the proposal or the project, but they heard that we get free Phillips beer every now and then and they’re jealous.” He also admitted that Phillips is his favourite beer. “It’s pretty cool that this happens to be the brewery that we connected with.”