UVic declines to take stance in support of Unist’ot’en

Your Feb. 25 UVSS Board meeting Tweet-cap 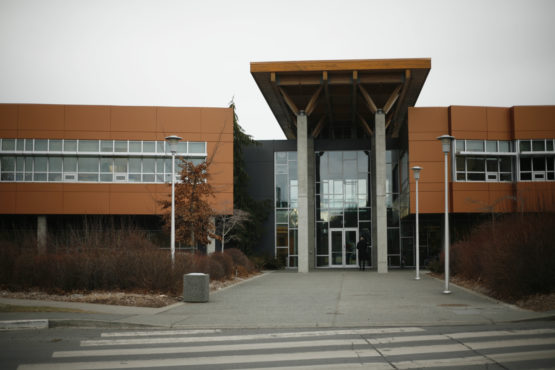 The UVic executive has relayed the message to the UVSS that they will not be taking a stance in support of Unist’ot’en. Photo by Belle White, Photo Editor.

This week’s University of Victoria Students’ Society (UVSS) Board meeting — held on Feb. 25 due to a snowy cancellation two weeks prior — focused on the UVSS annual survey, amendments to the UVSS’s Issues policy, and whether UVic will support the Unist’ot’en protection of unceded Wet’suwet’en First Nation lands.

Kolin Sutherland-Wilson, representative of the Native Students Union (NSU), started the meeting with an acknowledgement of territories that recognized the beauty of the land we live on, and reminded the board that territory acknowledgements are just a first step towards action.

Next, Pierre-Paul Angelblazer, Director of Outreach and University Relations, welcomed Gina Tran, the new Students of Colour Collective (SOCC) representative, to the board. A round of introductions followed.

Reports from constituency organizations and committees had a familiar theme: many meetings and events had to be rescheduled due to the recent snow storms.

The NSU was hopeful that their woolworking workshop will be rescheduled in the coming month, while Ainsley Kerr, Director of Campaigns and Community Relations, was happy with turnout at the “Let’s Talk About Sex” event she had co-organized alongside the Anti-Violence Project (AVP) and UVic.

Third Space/Feminist Collective representative Jasmine MacGregor confirmed that the group is close to finalizing a new name — the Gender Empowerment Centre is their current top choice. Although they are still working on the acronym, they believe GEM has a better ring than GEC.

Sutherland-Wilson says the NSU is planning to reschedule their wool working workshop that had to be cancelled due to snow.

Question period was dominated by discussion of what the UVSS was doing to lobby UVic to support Unist’ot’en, as was promised in a motion passed at the Jan. 15 Board meeting. The clause in the motion specifically read: “The UVSS Board lobbies the University of Victoria to make a public statement condemning the actions of the British Columbia government and the RCMP.”

Angelblazer said some Board members had met with UVic executives, and that UVic declined to take a side.

“As an institution they’re not going to be taking a stance, but they’re there to produce an environment for discussion as opposed to coming out with an opinion on it,” said Angelblazer.

Sutherland-Wilson asked if the UVSS could get that answer in writing.

“Right now it just seems like we’re being totally brushed off, as the NSU,” said Sutherland-Wilson. “So at least if we had some point to keep the conversation going — right now, we haven’t heard a word, or anything.”

Somebody else on the Board asked Sutherland-Wilson if the NSU had reached out independently to the university.

Sutherland-Wilson said they thought they had indirectly, through their column in the Martlet. “I was hoping that might warrant a response,” he said, reminding the Board that the motion that had been passed stated that the UVSS would lobby the university.

“I would hope their first instinct was to reach out to the Native Students Union after all that,” he said, referring to the NSU column as well as the announcement that the UVSS, the NSU, and the Advocacy Relations Committee were all donating money to the Unist’ot’en legal defence fund.

After Curtis Whittla, Director of Finance and Operations, reiterated what Angelblazer said about the university creating an academic environment where discussion could be had, Sutherland-Wilson asked the Board for help in setting a meeting between the university executive and the NSU.

“Maybe not the executive, but maybe the Operations Committee,” said Isabella Lee, Director of Student Affairs.

Before question period ended, another point was raised calling to question the extent of lobbying UVSS Board members had done, reminding the Board once more that the promise to lobby the university was a motion that had been passed at a Board meeting in January.

The first motion of the meeting proposed that the annual UVSS survey become a responsibility of the Member Outreach and Engagement Committee, and that it is more consistent from year to year for more accurate comparisons. The motion passed.

First motion involves the annual UVSS survey, asking that a more clear and consistent survey be released by the Outreach and Engagement committee every fall

“[The Issues Policy] is thematically completely different,” says Angelblazer. “It talks about our views as a society, what has been voted on at general meetings and referenda… A lot of people look at the Issues Policy as “what is our student society”… but that’s not immediately apparent if you’re looking through the Board of Directors policy.”

The motion passed, and the Issues Policy will now be its own document on the UVSS website.

The final motion of the night proposed that Lead Directors should be restricted in holding board or executive positions with any UVSS affiliated organization, advocacy group, subsidiary organization, or separately-incorporated fee-levied group (such as the Martlet, CFUV, or VIPIRG). These restrictions are already in place for clubs and course unions.

“It makes sense. We don’t want Lead Directors to sign cheques for their own clubs,” said Whittla.

“I realized for advocacy groups, affiliated organizations, and subsidiaries that those same limitations were not in place, and some of these organizations have tens of thousands of dollars in their budgets,” he continued.

Whittla has raised a third motion that would stop lead directors from holding positions at advocacy groups and affiliated organizations. This is in line with clubs and course unions, where lead directors cannot hold board positions either

Both the NSU and the Society for Students with a Disability (SSD) representatives said they had not had enough time to consult their organizations about this change, and asked that section 2.4 (the section that pertained to them) be tabled till the next meeting.

Sutherland-Wilson and Blecha would like to push the motion to the next meeting as they haven't had enough time to consult their respective groups. The motion is divided into two sections, section 2.4 is tabled till the next meeting

The motion passed as it relates to separately-incorporated fee-levied groups, and as the board moved to in camera, it was time for the Martlet to leave.

The next UVSS Board meeting will be on Mar. 11 at 6 p.m. in the Upper Lounge of the Student Union Building. Readers can follow our live Twitter coverage at twitter.com/themartlet.