UVic gets creative with virtual reality film ‘Knot For Sale’

Ever wanted to explore more of your favourite film? Virtual reality filmmaking has taken cinematic immersion to a new level, as audiences of Knot For Sale will soon discover.

Knot For Sale is the first virtual reality (VR) film to come out of UVic’s WRIT 420 class, a workshop on film writing and production taught by UVic professor Maureen Bradley who also happens to be the film’s director. The film will be screening at the CineVic Lounge on Friday, Feb. 24 from 6–8 p.m., alongside the traditionally filmed version and a documentary on the VR film production process.

Bradley will also be speaking with Kate McCallum, one of Knot For Sale’s directors of photography, on a panel at the Victoria Film Festival from 3:30–4:30 p.m. on Saturday, Feb. 4.

Danika Thibault, Adrian Southin, and Scott Secco, the producer, assistant director, and camera operator, respectively, took the time to discuss their experiences working with 360˚ filming for the first time, and shared their perspectives on this emerging medium. 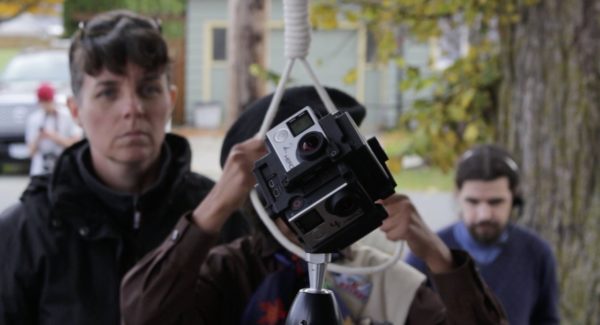 The Martlet: Briefly, what is Knot For Sale about?

Southin: Knot For Sale is the story of Stacey, a Wednesday Addams-esque girl in a scout troupe, trying to prove her bullies wrong by selling the most cookies. When her somewhat morbid sales techniques scare off would-be customers, she decides on a more drastic approach.

As virtual reality is a relatively new film medium, where did you draw inspiration for the creation of Knot For Sale?

Thibault: Planning the film and editing the script to suit this medium was pretty tricky, since there aren’t many narrative VR films floating around. As you said, it’s fairly new! We watched all the narrative films we could find on YouTube and on emerging VR content platforms like ‘Within VR’ to get a feel for the medium. There are quite a few short documentary 360˚ films out there as well, so we watched a lot of those and used them as a jumping-off point for the narrative medium. It’s definitely a whole new way of thinking.

What went into creating a film that would thrive in 360˚?

Southin: It was really key that every angle of the film had something worth looking at. Little set pieces that tell the viewer more about the characters, people arrayed on different sides of the camera, small actions that might be missed if the viewer looks elsewhere. I think that 360˚ film has a lot more similarities to the stage. The takes are long and movement is really crucial. You really can’t have a static, unmoving scene with only one place to look in a 360˚ film. It defeats the purpose.

What are some challenges you faced when directing for virtual reality viewing, and how did you overcome them?

Southin: One really big challenge was that the directing team had no way to watch the scene as it was being performed. Before we could call action, all crew either had to be off set or a few key members [were] hidden behind a car (or under a table in one scene), whereas normally we’d have a bunch of us huddled behind the camera. If something went wrong, we had no way of knowing unless we heard it. We set up an auxiliary 360˚ camera on the main camera that was linked to a tablet, which enabled us to view some of the take as it happened, but there were still a lot of difficulties.

In what ways do you feel WRIT 420 has impacted your approach to filmmaking?

Secco: WRIT 420 was a great reminder of how important the collaborative aspect of filmmaking is. No one can be a master at every aspect of film since it is so multi-faceted, which is why it’s integral to work with enthusiastic people with different skill sets and ideas than yourself. WRIT 420 was awesome because I got to work with such a rad crew! It was also fun to work with a camera system that none of us had ever used before. 360˚ is still such a new technology that it felt as if we were getting a preview of the future.

Any advice for others looking to experiment in this medium?

Thibault: My biggest piece of advice would be to forget everything you know about making a traditional 2D film. This is a whole new medium and needs to be approached from a completely different angle. Think outside the box (literally) and experiment!

These interviews have been edited and condensed for clarity.

CORRECTION Jan. 27: The photo in this article erroneously labeled the individual behind the camera as Scott Secco. It is actually Aisha Haq, and we sincerely regret the error.