UVic gets serious traction during Bike to Work Week 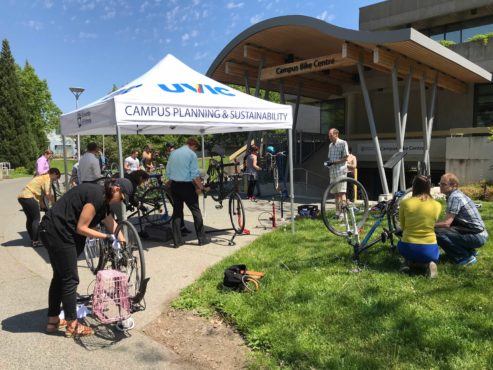 In a city divided over bike lanes, members of the UVic community came together from May 28 to June 3 for the annual Bike To Work Week (BTWW), 24 years after the province-wide event first originated in Victoria. UVic has been an official sponsor of BTWW since 2001, although UVic Sustainability Coordinator Susan Kerr said the university was informally involved prior to that for a number of years.

According to the data, over 7 000 participants around Greater Victoria biked over 300 000 kilometres. UVic’s final totals show that their 56 staff and student teams, with 451 overall participants, logged a cumulative total of over 9125 cycled kilometres.

However, Kerr says UVic’s actual results are higher than recorded, as 10 of the teams did not —  and she expected, probably will never — submit their data. She also attested that this year’s campus events saw the best turnout to date.

“It’s always been something I look forward to, it’s fun,” said David Brown, a year-round bike commuter who has cycled in BTWW for about five years. “The bike infrastructures have improved in Victoria, there seems to be more people participating, but my personal experience is about the same — hitting the stations, getting some free loot.”

From the data submitted so far, UVic cyclists have saved over 6 587 kilograms of greenhouse gases, while Greater Victoria as a whole has saved over 66 000 kilograms.

Mark Valade, who participated in BTWW at UVic for the first time this year, racked up more mileage (or rather, kilometre-age) in the week than typical for his cycling commute.

“I learned a couple new trails. I used to stick to roads or whatever when [biking],” said Valade. “My own awareness of the trails is better now.”

UVic ran free events over the course of the week (independent of the citywide festivities), including a participant lunch, celebration stations with food and cycling resources, and a bike maintenance workshop hosted by UVic’s bike resource centre SPOKES, which also temporarily offered free bike rentals. Bike locks could be checked out as easily as books at the McPherson Library, courtesy of the UVic Campus Sustainability Fund. 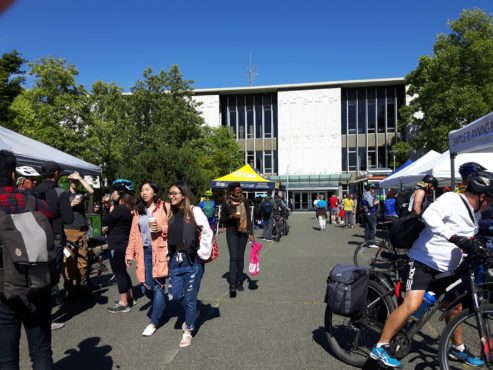 Students mill about at booths set up for Bike to Work Week. Photo via UVic Campus Planning and Sustainability

This initiative to encourage cycling commuters contributes to UVic’s Sustainability Action Plan, which looks to lower the rate of people arriving on campus in single occupancy cars from 40 to 30 per cent.

In addition to minimizing the number of cars on campus roads and parking lots, UVic aims to promote physical health and reduce greenhouse gas emissions. From the data submitted so far, UVic cyclists have saved over 6 587 kilograms of greenhouse gases, while Greater Victoria as a whole has saved over 66 000 kilograms.

Safety is a factor people must take into consideration when biking to work, as both Kerr and Brown stated concern for the vulnerability of cyclists in rush hour traffic.

“It definitely seems like I have a lot of close calls, and if I’m not watching out 100 per cent of the time, I can’t rely on cars watching out for me — it just doesn’t work that way,” Brown said. “I know a lot of people that have been hit by cars.”

Kerr has spoken with individuals who expressed a desire to bike to work, but were deterred by a lack of comfort riding through busy areas. However, she believes the new two-way bike lanes being installed downtown help to encourage comfort on the road.

“The feedback that I’ve had from people is that they really like these new bike lanes and it encourages them to ride more and also with their families, too,” she said.

“It just makes you happier.”

Just over 400 UVic cyclists on 55 teams registered last year, but Kerr says that actual participation is usually higher than the submitted data. While teams typically range from two to 60 members, some people join informally or bike without reporting their information to the Greater Victoria Bike To Work Society.

For Kerr, this isn’t a concern — it’s more important that people feel comfortable and choose to get involved.

“You don’t have to ride every single day, but just to see if you can do it — whether you’re a fair-weather cyclist, [ride] 365 days, or are just trying it for the first time as a commuter during Bike To Work Week,” Kerr says. “The whole goal…is to get people on their bikes and riding, and just getting out there and getting involved in active transportation.”

Cyclists are encouraged to carry the sustainable and healthy habits formed over BTWW into the rest of their year.

“For me personally, I think it’s just a great way to start the day,” said Kerr. “It mentally prepares you for the day ahead and then winding down at the end of the day, it’s a great way to clear everything off and it just makes you happier.”

With files from Marshall Scott-Bigsby