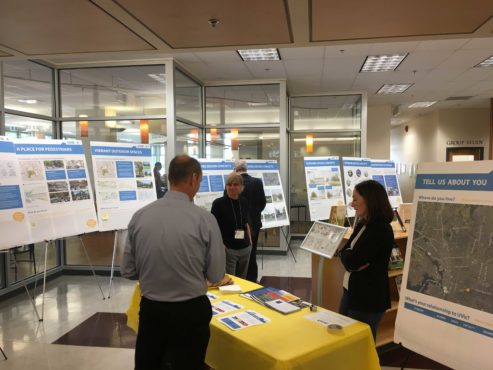 In the middle of a week of celebration for the graduating class of 2018, plans to welcome the next batch of undergraduate students to campus were already in the works. Nestled a few hundred metres from ‘Grad 2018’ merchandise booths and ceremonies taking place in the University Centre for convocation week, Campus Planning and Security set up an open house booth outside the McPherson Library to gauge feedback on their new student housing plan.

“We’re looking to get feedback from the campus community about the initial building designs, some of our sustainability principles, and just general feedback about what’s going to be included,” said Director of Campus Planning and Sustainability Mike Wilson.

The university hopes to seek feedback from the community on preliminary ideas for the building and landscape designs of the new student housing proposals, starting with open houses featuring potential concepts and plans.

These open houses comes in the wake of February’s provincial government budget for 2018, which pledged $450 million to help universities finance student housing, and UVic’s subsequent announcement of two proposed sites, to undergo construction in 2020.

“Ring Road” and “Cadboro Commons” were the two sites proposed by the university in March to provide a home for 600 additional students.

The new Ring Road residence, located just south of the Student Union Building, will require the demolition of the existing Emily Carr and Margaret Newton buildings. The residence will include a dining hall and servery on the main floor below the student residence on the upper floors, and is slated to be built first. 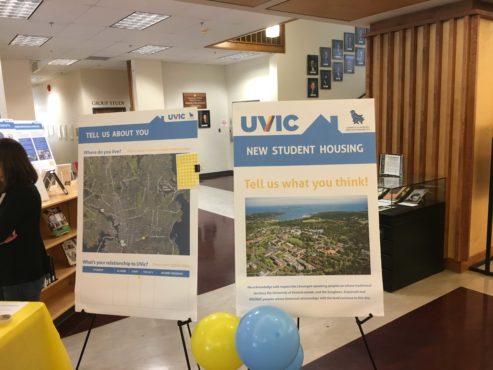 As for the Cadboro Commons building, plans show that it will be built in the same place as the current building of the same name, but it will include student residences on top of renovated conference and academic spaces on the main floor.

But the specifics of the buildings are yet to be decided, which is why the open house event was hosted.

“This is our first open house, so some of the key areas where the broader campus community can provide input are in the new public spaces,” said Wilson. “There’s going to be quite a bit of improvements next to and in front of the SUB, which also stretches into our new building (Cadboro Commons) which will include a new food service and dining hall.

“There’s a lot of great opportunity to provide feedback on some of these new public spaces, which everyone can use.”

Inside the library, a line of cardboard posters showcased the steps the university has taken to plan the new student housing sites and initial designs of the Ring Road and Cadboro Commons buildings.

“There’s sustainable design principles looking at what the outdoor spaces will look like, and then you can get an image of what the buildings are starting to shape up to like,” Wilson explained.

Regarding the specifics of the design plans, Wilson was interested in seeing community reactions to a new east-west cycling and pedestrian crossing that will more efficiently link the residence area to the centre of campus.

“One of the other things that we are looking to do is to better connect the student housing precinct to the centre of campus, through what’s called the ‘grand promenade.’”

The grand promenade, the walkway in the middle of the quad between the Clearihue and Elliott buildings that connects to the residence area, is planned to be extended to encourage walking and cycling between the new buildings and campus. 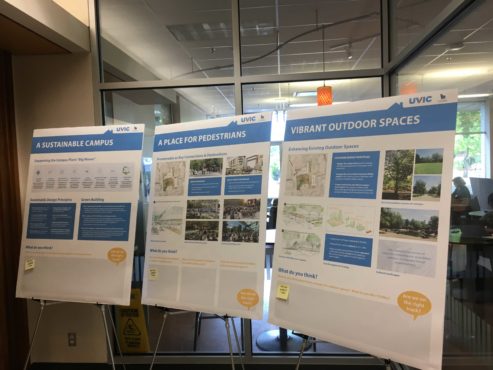 The residences are part of UVic’s four-step “Campus Plan,” debuted in 2015 and renewed in 2016, and looks to connect university officials with community members throughout construction processes.

In 2017, as per the first stage of their plan, UVic surveyed over 500 community members, students, and faculty members to get their opinion on the project.

Now in stage two — design —  the university is looking again for feedback from the community, now that they have proposed the building sites and layout plans.

“We will be posting all these online, and there’s going to be an online survey as well,” said Wilson. “So if people miss the open house they’re welcome to take the survey and provide feedback.”

On June 14, UVic held a second open house in Goward House from 5–8 p.m. to gauge off-campus community members for their stance on the designs.

With the two summer open houses wrapped up, Wilson said he hopes to put the community feedback toward refining future student housing plans, and to hold another open house in the fall to get more input, with more students back on campus.

The university will also then look to file for municipal approvals by the end of the year for the project, with plans to start construction in 2022.