The UVic FSAE car in action at a previous competition. Photo provided by UVic FSAE

A UVic motorsport club has further success in their sights after a top-20 finish at an international collegiate design competition in Michigan.

The UVic Formula Society of Automotive Engineers (or FSAE) finished 16th out of more than 100 teams at the annual Michigan FSAE, the largest competition in the world for collegiate motorsport design. Their placement was determined by scores in a variety of tests — measuring acceleration (both straight and lateral), endurance, and efficiency.

Josef Svorkdal, Project Manager and Aerodynamics Lead with UVic FSAE, says the 16th place finish — the highest finish for any Canadian team — is a massive affirmation for the club.

“It’s a validation of the designs and the work that we’ve been putting in,” says Svorkdal, speaking from a Subway restaurant in Columbus, Montana — a brief stop on the team’s cross-country drive to return back to Victoria.

“It’s a really good reflection of the engineering work that’s being done — specifically by us — and, in general, that’s being taught at UVic.” 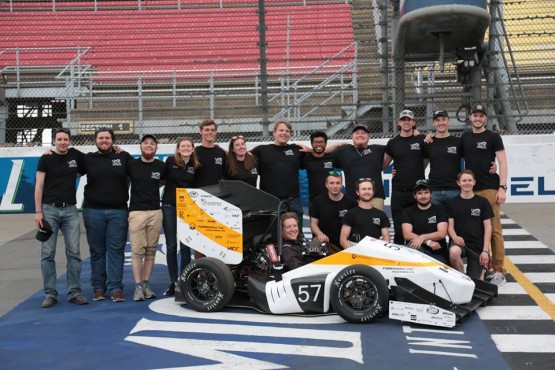 The UVic FSAE team grins after a top-20 finish at the world’s largest FSAE competition in Michigan. Photo provided by UVic FSAE

UVic FSAE is comprised mainly of engineering majors, though there are a mixture of students from other faculties. The club spends all year working on and perfecting the design and construction of a Formula 1-esque Motorsport car, with students involved at every step of the process.

The big test comes every year in Michigan. It’s there that around 120 teams from countries all across the globe meet and test themselves. Competitions exist all around the world (there are around 550 motorsport clubs internationally, Svorkdal tells me) but Michigan’s is the largest. It means the placement is more important than at any other competition, and it’s why Svorkdal and UVic FSAE are so proud of their accomplishment.

“That’s why we go to this competition,” says Svorkdal. “It showcases the best talent and it’s a good representation of how we stack up.”

UVic FSAE is not just for engineering students hoping to go into the automotive business. Svorkdal says that the skills he’s learned from his experience with the club could easily be applied to aviation or even space travel — and that’s why representatives from SpaceX and Tesla were judges at the competition.

After returning from the States, Svorkdal and the rest of the UVic FSAE team will take a much-deserved break and see their friends and family again.

“In our mad rush to prepare for competitions, we often spend a lot more time at school than at home,” Svorkdal laughs.

It won’t be long, however, before the team looks ahead to next year’s event.

“We decide whether we need to make a fundamental design shift [or] if we refine things,” Svorkdal says. “[Then] we try and set a goal for the competition in the next year. This year, as I said before, we were aiming for the top 20 and we were extremely, extremely pleased to get top 16.

“But … we don’t intend to slow down. We’ll take it in measured steps that are realistic, but the top 10 would be great.”

For Svorkdal, the competition not only pushes the team to perform better but it also allows for a learning opportunity from the other designs on display. 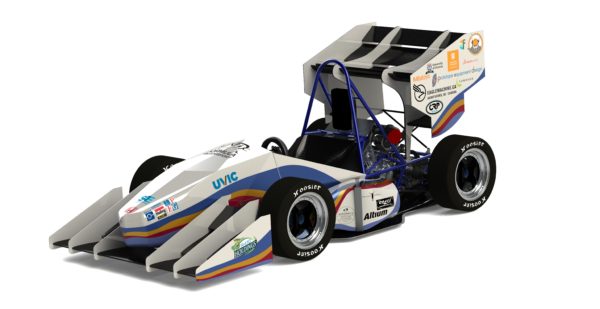 A computer’s rendering of the UVic FSAE car. Photo provided by UVic FSAE

“I think when you first roll through the gates [and] you see all these other vehicles and you’ve been completely focused, especially for the last couple months, on your own design and your own project, and you get a little bit of tunnel vision,” he says. “And then all of a sudden you see all of these starkly different approaches to essentially the same engineering challenge, and people have taken it from very different angles.”

It also allows Svorkdal and his teammates to push themselves to go further with their ideas.

“The first time I went to competition last year I immediately felt like, ‘clearly all of these different designs are better than ours’,” admits Svorkdal. “[But] when you have an employee at Tesla who’s doing your design judging come and give you feedback and tell you that the fundamentals of what you’ve been doing are really excellent and [give] you a couple pointers to just bring it up to the next level — it gives you a lot of confidence in your engineering ability.

“Certainly for me it gives me a new energy to attack everything — including school.”

Not to mention long drives back from Michigan.

Partnering with UVic’s Formula Hybrid Club, UVic FSAE are currently running an Indiegogo campaign to raise funds for “vehicle and student improvement”. GM Canada is also matching all donations up to $10 000 raised through the campaign. Check it out here.