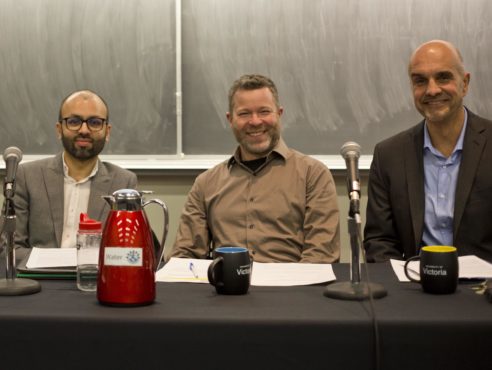 From left to right: Asad Kiyani (Faculty of Law), Scott Watson (Faculty of Political Science), and Oliver Schmidtke (Centre for Global Studies). On Tuesday, March 5 they presented on a panel at UVic’s Ideafest called “How a rise in asylum seekers affects Canada,” speaking about Canada’s unique private sponsorship program and the fundraiser.

A group of scholars with ties to the UVic Political Science department have launched a sponsorship group to help aid, fund, and bring a refugee family to Victoria.

The group, called “UVic Political Science Community and Friends,” is led by Professors Colin Bennett, Oliver Schmidtke, and Oliver’s wife, researcher Beate Schmidtke. The idea was conceived in the wake of waning media attention to the global refugee crisis.

“After witnessing … so [much] intense content, I have to say it was … very important for me to have a feeling [of doing] something,” says Beate, the project manager and communications officer for EUCAnet (Europe Canada Network), a public outreach platform that focuses on European-Canadian issues and relations.

“So a group of us came together, and [were] debating how can we help. I think [the] university has a responsibility to take a leadership role on it.”

Last year, Oliver and Beate began sponsoring a refugee family, and were inspired to get more people involved and bring more attention to the refugee crisis.

“Although there was a great deal of enthusiasm for the Syrian refugee crisis back in 2015 … the media attention has abated.”

In the year since, they have brought together members of the UVic Political Science department, friends, and acquaintances to get involved with the sponsorship group.Their goal is to reach a $30 000 to help bring the family to Victoria.

“I think the message is that although there was a great deal of enthusiasm for the Syrian refugee crisis back in 2015, and a lot of front page news about it, the media attention has abated,” says Bennett. “But the demand is still is great as ever.”

The group has partnered with the Blended Visa Office-Referred (BVOR) program that works in conjunction with the United High Commissioner for Refugees (UNHCR) to match refugee families with private sponsors in Canada.

According to the UNHCR, 68.5 million people around the world have been forced from their homes this year. About 25.4 million of them are classified as refugees. Nearly one person is displaced every two seconds as a result of conflict or persecution.

On Feb. 17, Oliver and Bennett published an opinion piece in the Times Colonist which described the significant progress made on the refugee crisis, but also reminded us that it hasn’t gone away.

The duo wrote how in August of 2018 there were 1 500 refugee spaces provided by the Canadian government for the BVOR program, but over 1 000 of those spots went unclaimed.

“In 2019, the government hopes to resettle 1 650 people under this program, but without the extraordinary financial incentive from private donors, it is highly unlikely that these numbers will be reached. There is still a refugee crisis, and still a pressing need for private sponsorship groups to assist these desperate people,” they wrote in the article.

“A group can move mountains and save people’s lives.”

The money will go toward co-funding the family’s rent and general expenses. Beate believes sponsor groups like this prove that everyone can help alleviate the refugee crisis — even if they live busy lives.

“It will be quite interesting to see how we can support people even though we are so busy, is this an endeavor … that can go ahead?”

Currently, the UVic Political Science Community and Friends have raised just under $11 000 of their goal, and although the financial commitment to the family will end after a year, they believe that they will have formed everlasting relationships with the family and will consistently check in with them in the future.

“We think we are overwhelmed and we can’t really help, however, seeing the needs that are out there and realizing that if you find a group, a group can move mountains and save people’s lives,” says Beate. “Even though we are busy, you can really participate in those concrete measures of help.”