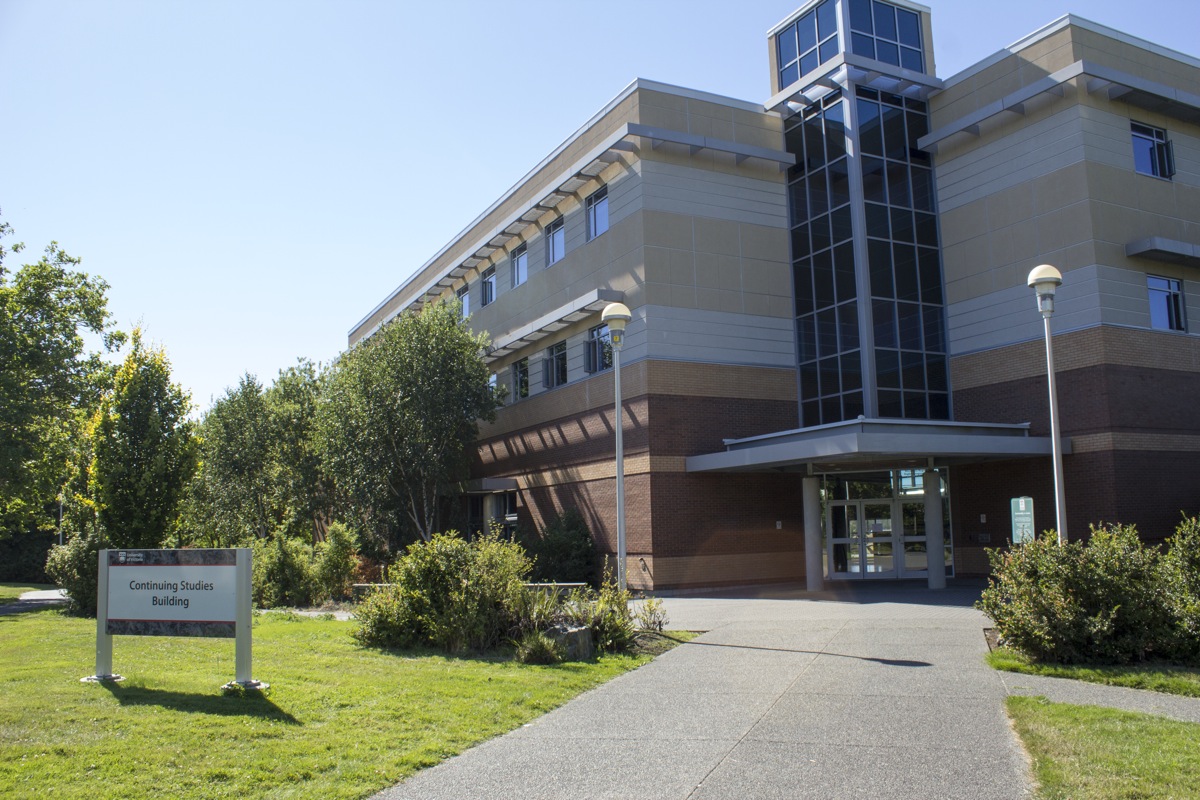 The Continuing Studies Building will soon be expanded to house the growing international student population. The triangular addition, located at the back of the building, will fill in the existing L-shaped structure. –William Workman (photo)

UVic’s Board of Governors posts reams of documents online, providing greater insight into the university’s operations. Highlights from the latest package include updates on university expansions, finances, details about staff salaries, and other payments.

This summer, construction begins on an addition to the Continuing Studies Building. Projected to cost $13.7 million, it is intended to service the growing number of international students. According to Maureen MacDonald, dean of continuing studies, the lack of space has scattered ESL classes and resources across the campus. The new space will add classrooms and computer labs, and house the pronunciation clinic, currently located the library. The single space is meant to foster social connections between international students. Construction is expected to finish in November 2015, and new classes will start in January 2016.

From 2001–2010, UVic invested over $220 million constructing an enormous number of buildings, including (but not limited to): the David Turpin Building, the Engineering/Computer Science Building, the First Peoples House, the Bob Wright Centre, the Medical Sciences Building, an addition to McPherson Library, and several new residence buildings (Tower, South Tower, Ring, and Park). With the Centre for Athletics, Recreation and Special Abilities (CARSA) and associated parkade underway, the university will focus on renewing or expanding existing buildings, and re-purposing existing space.

In the next five years, UVic aims to add 600 beds, estimated to cost around $60 million, to shorten wait lists for residences. The cost of renewing the existing residences is projected to cost an additional $81.5 million. However, this hinges on whether the government will allow the university to borrow money, as the university is unable to fund the expansion itself.

The university also plans to expand the Business and Economics building to accommodate the growing business program. The estimated $20 million expansion was originally to be funded solely from philanthropic sources, but will now be a combination of philanthropic sources, provincial funding, and university sources. According to the 2014-15 Five-Year Capital Plan, “the timing for moving forward on this project will be dependent upon the percentage of philanthropic funding that can be secured and the availability of Ministry [of Advanced Education] and university sources.”

The Fraser and Petch buildings are set for seismic upgrades, with costs expected around $16 million and $32 million, respectively. These projects “are expected to be funded primarily from the Ministry of Advanced Education.”

Finally, the sciences labs in the Elliott building are slated to be upgraded. The $7.75-million project, primarily funded by the province, addresses potential health and safety issues of the labs, which were built in the 1960s.

The financial prospects of the university look secure, even promising, despite some projected shortfalls due to adjustments in funding structures by the Ministry of Advanced Education.

Of special interest to students, there is a planned 2 per cent increase in tuition across all students to comply with the Ministry of Advanced Education’s inflation adjustment mandate. Other increases in fees include increased parking, housing and athletics fees.

Also of note is $380 000 allocated for Access Copyright, an organization representing the interests of academic publishers, permitting students to reproduce certain published works under restrictions. This is despite UVic announcing in December 2011 it was opting out of the Access Copyright Interim Tariff for 2012. The tariff was initially rejected on grounds it would balloon the $60 000 royalties expenditure to $700 000. The university has since reconsidered its position and remains part of Access Copyright, and has paid $486 000 in 2013-14.

The supporting materials end with two schedules of payment: one listing salaries of many UVic academics and administrators, and one for goods and services, all for the 2013-2014 year. Goods and services include equipment and food purchases, payments to contractors and architects, publishers, and other universities. One entry of note is a $419 000 line-item for DM Cakes Etc., a local bakery specializing in cakes, cookies and other desserts. It is unclear how much of this product was resold, and the relevant UVic staff were unavailable for comment before press time.