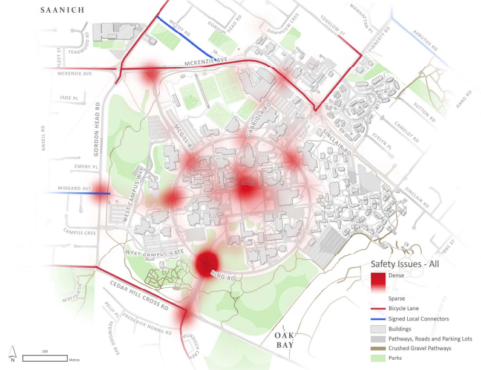 Areas of campus where drivers, pedestrians, and cyclists are most likely to encounter conflict. Graphic via UVic

Whether you bike, drive, walk, bus, or longboard, most people have encountered issues either with or as cyclists on campus.

Close calls and collisions may soon be a thing of the past as a campus cycling plan, deemed a “high priority” by the Campus Planning Committee, is under development by the office of Campus Planning and Sustainability (CPS).

The cycling plan endeavours to resolve safety issues on multimodal pathways, Ring Road, and adjacent campus roads through separating modes of transportation as much as possible. Mike Wilson, the director of CPS, is consulting Urban Systems, the group who designed Fort Street’s two-way bike path and the Saanich Active Transportation Plan, on how this goal will shape the future of UVic’s infrastructure — particularly Ring Road.

“Our broader goal [is] to reduce single occupancy vehicle traffic to and from the campus,” said Wilson. “We’re hoping that by giving people more opportunities and making it easier to get out of your car, [people will] use a different mode of transportation like cycling, walking, or transit.”

To that end, Wilson aims to promote the comfort of UVic cyclists in addition to improving accessibility and awareness of end of trip facilities.

According to the last campus traffic survey, 40 per cent of people travel to UVic in single occupancy vehicles while the remaining 60 per cent chose alternatives like carpooling, bussing, and cycling. UVic’s Sustainability Action Plan aims to reduce solitary drivers to 30 per cent.

“[We’re] trying to get people out of their cars and onto their bikes,” said Wilson. “We’re trying to get to that last 10 per cent.”

Areas of campus where drivers, pedestrians, and cyclists are most likely to encounter conflict. Graphic via UVic

The first phase of the cycling plan development took place last fall, when CPS reached out to consult the community on issues experienced with cycling on campus. This was accomplished largely through pop-up events, which culminated in 750 interactions with community members, and a preliminary survey.

In that survey, 1 300 people dropped pins on a campus map to identify any time they felt uncomfortable — from accidents to near-misses—as a cyclist, pedestrian, or driver.

“That gave us really great information, which we never had before,” stated Wilson. From the data, CPS created a heatmap of areas with the highest density of conflict (pictured above).

Currently, the cycling plan development process has moved on to the second phase. While the first phase confirmed issues and conflict points with bikes on campus, the second seeks to find ways of addressing these problems through campus engagement labs and another round of surveys.

For the third phase this summer, CPS will develop long and short-term goals for the plan based off of feedback and data collected in previous phases. Wilson anticipates that CPS will have a drafted plan ready to present to the Campus Planning Committee for feedback and approval by November, after further community consultations in the fall.

Until the plan is finalized and funding can be procured, Wilson stated that is is difficult to know what changes students can expect to see in the coming years. But if all goes well in November, he anticipated that some improvements could be conducted in the summer of 2019.

“My hope is that we could tick off a few easy wins earlier in the process,” Wilson said. “Beyond Ring Road, there are some areas on campus where simply widening a pathway or separating out pedestrians and cyclists would be a great improvement, and there’s a great ability to do it.”

To weigh in on the future of cycling on campus, Wilson encourages members of the UVic community to fill out the online campus cycling survey available on UVic’s website until March 23.

To participate in the campus cycling survey, visit UVic’s Campus Planning and Sustainability website at www.uvic.ca/campusplanning/.