Club rewarded for their efforts in battling elements, gravity

They overcame a broken down car, a broken into car, and fifty degree weather — all to travel to New Mexico, join hundreds of other university students, and launch a part-carbon fibre, part-plastic rocket 10 000 feet into the air.

But when I sit down with six members of the UVic Rocketry club, it’s clear they’d do it all again in a heartbeat.

“It’s not everyday that you get the chance to build a rocket and compete,” says member Abdul Fourteia.

The club started as a 400-level engineering course project and has now grown into one of the most successful rocketry clubs among North American universities — a team of engineers, biologists, and business students, all working together to hit their goal of 10 000 feet.

The members of UVic Rocketry who made the trip to New Mexico pose with one of their rockets. Photo provided

The most recent affirmation of the club’s work came in New Mexico at an international rocketry competition for universities across the globe: the Spaceport America Cup (previously known as the Intercollegiate Rocket Engineering Competition).

Measured and judged by experts in the aerospace industry, the teams and their rockets are painstakingly assembled on the day, featuring hand-built engines and structures. The general competition ranks entrants on the overall quality of the rocket from take-off to landing, presentations on the progress of the rocket, and the assembly of the equipment.

After that, side competitions measure specific aspects of the rockets — like their payloads, which are required cargo for the rockets. While some teams chose to simply include weights, UVic Rocketry chose to design something unique.

Philipp Sharikov, a mechanical engineer with the club, was one of the lead engineers in charge of their payload project.

“It’s basically a fancy science experiment that’s related to rockets,” he says. “You fly it up and you do science with it.” 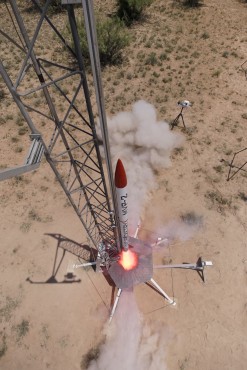 One of UVic’s rockets as it begins its launch into space. Photo provided

The payload project designed by the UVic team consisted of a biology experiment testing the effects of hypergravity on bacteria (which is important information for interplanetary travel). The experiment, designed by microbiology student Annaliese Meyer and overseen by Sharikov, was judged to be the most impressive among the other hundreds of competitors.

“When you get down to the competition,” Sharikov says, “there are a lot of teams, high-level teams, but one of the things they don’t actually do is a science project. They’re very good engineers so they do engineering projects . . . What we do is we have a whole dedicated science team that designs a science experiment.”

“That’s one of the areas that I think our team excels [in].” Sharikov smirks, “especially because we took first place.”

Despite the complexity of the rockets, the most difficult part of the competition may not have been the competition itself but rather the travel there. The club spent four days driving down to New Mexico and encountered flat tires and all-night drives. On top of the gruelling journey, one of their vans was broken into in San Francisco.

Even once they got there, the team battled forty to fifty degree weather and the sandstorms that often kicked up in the desert. By the final night, the team was exhausted — but it only made winning the payload challenge that much sweeter.

“They read out our name for the first prize in payload and the whole team had a pretty good celebration. We definitely felt like we deserved it, I’d say that,” says Martin Kellinghusen, an electrical engineer and one of the founding members of the club. “After a week of getting beat up in the desert it was nice to be awarded something.”

With the competition over, the focus returns to campus and the continual improvement of the design and performance of their rockets, though ideas vary when it comes to hopes of what the team wants to accomplish next.

Graeme Ramsey, the engine expert, wants to see a move towards a hybrid engine (in this case a mix of liquid and solid gas, rather than the electric hybrid engines we commonly think of); Kellinghusen, an electrical engineer, talks about greater communication between the rocket and the ground station’s computer; Josiah Stefani, a mechanical engineer, wants the club to continue to optimize the propulsion system of the rocket.

Despite the variety of disciplines and technical ambitions, the team are united around one particular goal, which is to reach the Karman line, the arbitrary line for space that is 100 kilometres up, as Ramsay explains. “No academic group or no university group has ever reached 100 kilometres . . . that’s what we’re working towards.”

The club’s future challenges aren’t just technical though. As is often the case with university clubs, UVic Rocketry faces the hurdle of graduation-enforced turnover. Five of the six interviewed members have already finished university and are graduating in the fall. As a result, the club is always looking for new members.

Current member Jack Shudian explains the club’s need for help with the rocket assembly, administration work, and fixing flat tires means anyone is welcome — whether you have a degree in aerospace engineering or if you’re just a fan of Christopher Nolan’s Interstellar. 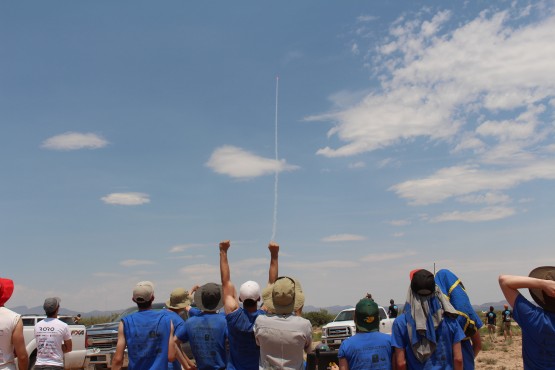