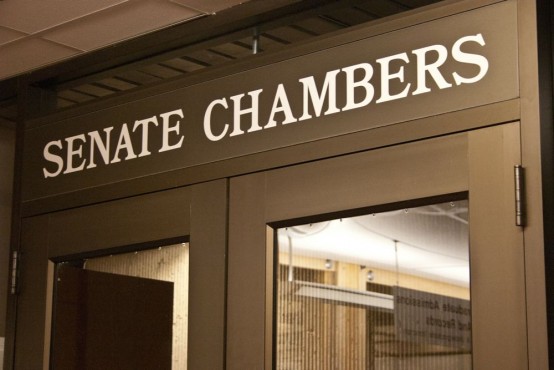 The UVic Senate voted to send policy outlining the use of editors by students back to committee after concerns over its language on Jan. 6. File photo by the Martlet

A standardized policy on the use of editors by students at UVic remains elusive after the UVic Senate voted to send proposed amendments to the Policy on Academic Integrity (PAI) back to committee for further development on Friday, Jan. 6.

The PAI outlines standards around the submission of student’s work and the penalties that can be incurred should a student commit plagiarism, falsify materials, or cheat on tests and exams. Currently, it does not have any explicit policy on what sort of editing services are permitted for students.

The need for a policy around the use of editors was first investigated in early 2014 by the Senate Committee on Academic Standards. A sub-committee was struck, and underwent extensive consultations over the course of the 2015-16 academic year. Draft policy revisions were circulated in January 2016, with a second round of consultations following in April.

The proposed policy brought forth on Friday [full docket here] would add a section to the PAI titled “Unauthorized Use of an Editor,” that defines an editor as “an individual or service, other than the instructor, who manipulates, revises, corrects, alters or contributes to a student’s written or non-written work.”

“The use of an editor,” it continues, “whether paid or unpaid, is prohibited unless the instructor grants explicit written authorization.” The policy then states that peer review and tutoring that “do not include editing” are normally permitted.

Under the section outlining penalties for plagiarism, the new policy says unauthorized use of an editor “should result in a failing grade for the work.”

Sara Beam, Graduate Studies senator and associate professor, said that the PAI additions were written in response to concerns raised regarding the role tutors had in improving students’ writing.

But many other senators expressed concerns with the policy’s language, and said it required more clarity so it would not unfairly reprimand students, especially international students for whom English is a second language.

Marie Vance, student senator, said the policy had “really serious consequences” in terms of failing a course, and that students who have trouble with English will be unfairly targeted. She also asked what mechanisms would be put in place to identify whether a piece has been edited or not. None were outlined.

Others said it wasn’t clear what it means to “contribute” to a student’s work. Business professor Brock Smith said the term is too broad, and should be edited to say “direct manipulation.”

Paige Bennett, student senator, said the policy could inadvertently discourage students from working together or helping each other with schoolwork. “It seems like if you ask a student friend what they think of your thesis, and they don’t understand what ‘contribute’ means, it can stifle their learning.” She suggested editing the policy from “contribution” to say “contribution that alters the original work” to make it more clear.

Robert Lipson, Faculty of Science dean, said that the policy “has a huge number of concerns around interpretation,” and that he wanted to see the committee go back and consider feedback from the meeting.

However, Beam was adamant further revisions weren’t necessary. “We’ve gotten this [policy] to a really good place, and I think there’s a bit of senate committee burnout,” she said.

“Maybe if the senate isn’t ready, then maybe the university isn’t ready for a policy on editing,” Beam continued. “We’re pretty much as good as we’re going to get here.”

In the end, a motion to refer the proposal back to the committee passed, albeit narrowly, with every student senator in attendance voting in favour.

President Jamie Cassels said that the motion shouldn’t be seen as being opposed to those who worked on the policy, and expressed confidence in the committee’s ability to address the issues brought forward.

The next UVic Senate meeting will take place on Feb. 3 at 3:30 p.m. in the Senate and Board Chambers. For more on the Senate, including meeting minutes and dockets, visit uvic.ca/universitysecretary/senate.