UVic engineers are holding the annual Siege Week event from June 17 to 21, between 12 p.m. and 3 p.m. outside the Student Union Building. Passersby are invited to donate $5 for three shots on the engineering students’ siege weapons, with proceeds going to Engineers Without Borders. The event ended in rain Wednesday, but participants have enjoyed sun the first two days.

Stephen Lyon prepares to fire a giant slingshot as part of Siege Week, an annual fundraiser at UVic for Engineers Without Borders. Photo by Shandi Shiach 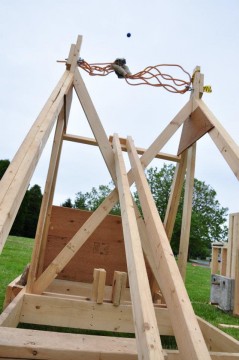