It probably won’t come as a surprise that it was Cassidy Luteijn’s experience as a student residence leader at UVic that taught her the importance of safe sexual health.

“I think the students — especially in residence, I find — are just coming out of being under their parent’s roof,” says Luteijn, “and with that comes a lot of exploration.”

That exploration may become a whole lot safer if Luteijn is selected as a winner of the ONE Canada Design contest — a competition run by ONE Condoms — that will see at least ten artists win a cash prize and thousands of free condoms for an organization of their choice.

The competition is one of the more creative Canada 150 celebrations taking place this year, the 150th anniversary of Canada’s confederation. “Winners will be chosen,” the contest rules read, “based on how well the designs . . . celebrate Canadian life, culture, and history.” Ten designs will be chosen based off of public voting, and the ONE Condoms staff will select other winners as well.

Hundreds of Canadian designers have seized the opportunity and submitted a number of hilariously thematic designs, drawing up prophylactic covers adorned with Canada geese, poutine, and maple leafs. Among some of the more notable designs is a cover with a maple syrup tree tap that reads “I’d tap that”; “Mount One” says another featuring a mounties’ hat; and another depicts a smiling caricature of Drake accompanied with the phrase “I’m a wrapper”.

Luteijn, a third-year visual arts student at UVic, is one of those artists. She submitted her designs on a whim, and was amazed when she was informed she’d made it to the top 50. 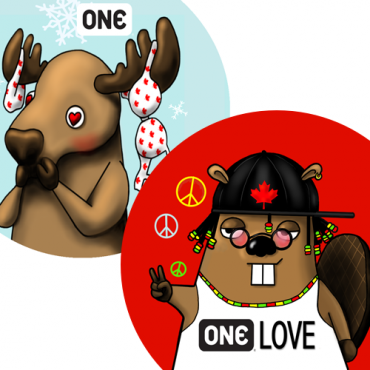 Both of Cassidy Luteijn’s designs, pictured above, made into the top 50 of ONE Condoms’ condom wrapper design competition. Graphics provided by Cassidy Luteijn

“It was pretty awesome,” says Luteijn, describing her shock at the news. “You could almost just blink a little bit and make sure you’re seeing what you’re seeing.”

Cassidy’s two designs — a hippy beaver with a “one love” t-shirt and a heart-eyed moose with underwear on its antlers — were first selected by ONE Condoms to make the top 100 before  a panel of judges chose her designs for the top 50. The public now has the chance to vote on which designs they like best, and a top 10 will be chosen to receive prizes.

It’s a novelty competition, but Luteijn recognizes the importance of easily accessible contraception.

“I think having a lot of free condoms at [students’] disposal kind of prevents a lot of that embarrassment that goes around — the stigma around going out and buying them and that nervousness around it,” Luteijn says. “I think it arms them for, y’know, some decisions that they’re going to make and growing up.”

But while many people (Luteijn included) find the idea of a condom design competition both hilarious and helpful, Luteijn, an Abbotsford-native, has found that people are still uncomfortable talking openly about sexual health.

“It was really nerve-wracking for me to have it posted [information about the competition] so blatantly for a lot of my family members that are quite religious [to see],” Luteijn says. “So it’s been a little bit — I’ve been trying not to let it take away from me being excited.

“I think it’s moreso just having to grit my teeth and bear it,” she says. “[Listening to people ask], ‘Oh, so what is this for?’ [I] kinda just have to cringe a little bit and tell my grandparents that I’m designing condom wrappers for my degree that they’re helping pay for.

“But I think it’s a conversation that needs to happen all the same.”

Luteijn realizes the designs are doing a social good, and that a more serious conversation about sexual health is incredibly important to society. With that said, she can still find the humour in the whole thing.

“I think it would just be cool to make it rain with condom designs,” Luteijn says. “I think it will be pretty funny.”

You can vote in the ONE Canada Design Contest by visiting onecondoms.ca and clicking the “Do it for Canada!” banner.