Walk into any university lecture hall and you’ll see kids on laptops. Some are scrambling to write down every word out of the professor’s mouth, others are finishing homework that was due in another class 30 minutes before, and most are procrastinating on social media.

But if you see third-year business student Justin Tse on his laptop in class, don’t expect any of the above.

It’s hard to blame him, particularly when he explains that his time is instead spent running his YouTube channel, once called “JTechApple” but now just “Justin Tse”, which recently hit 200 000 subscribers. It’s a full-time job for Tse — he works with technology giants like HP, LG, and Samsung, records and edits videos, and networks at industry events in Montreal, Toronto, and Los Angeles.

And, in his spare time, he attends classes at the Gustavson School of Business at UVic. 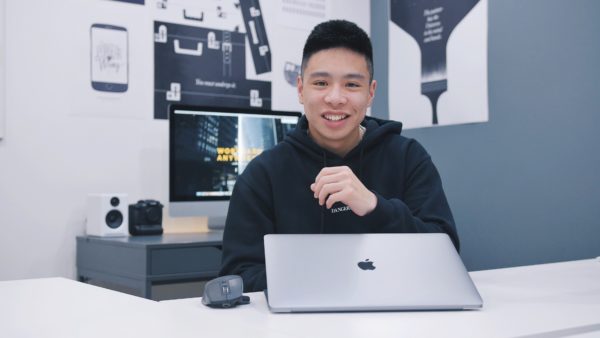 What started as an eighth grade hobby with an awkward, punny title (Tse’s original channel was called “iTouchiPodz001”) has turned into an online brand that spans across YouTube and Twitter (Tse is still trying to get the hang of Instagram, he tells me) and reaches millions of people.

Just six years after Tse first started making YouTube videos, he finds himself the owner of a channel with 33 million total views. It’s the kind of success that many YouTubers dream of, but on July 16, when Tse hit the 200 000 subscribers mark, he only celebrated the occasion with silver balloons and a quick Twitter post.

“Even during that day, [all I did was] take that picture with the balloons, head right in the car, drive to the office, and then next video is getting worked on,” Tse says.

In his videos, Tse analyzes, compares, and breaks down new gadgets and technology. His most popular video — with over 3 million views — is a comparison between the Samsung Galaxy S4 and Apple iPhone 5. Tse reviews and recommends smart watches, monitors, keyboards, and more, with each video averaging tens of thousands of views or more.

Once, Tse went for quantity over quantity — in his first year of making videos, he shot hundreds of videos on his iPod Touch.  Now, his videos are as high quality as you can get. He records from an all-white-walled office, with technology as shiny and slick as the transitions between shots.

One of the biggest tasks for Tse is balancing the content, the speed at which a video is published, and the technical quality of the video itself. It’s a balancing act he manages largely alone; Tse works with an editor who lives in Maryland, but directly corresponds with the tech companies who come to him with products they’d like him to talk about — brands like Range Rover, Telus, and Hypebeast.

Careers on YouTube are fleeting, often unpredictable, and few and far between. With that in mind, Tse can’t offer much specific advice for anyone looking to start a successful channel. All he can say is that some things cannot be taught.

“You really just have to do it,” Tse says. “There are so many variables in running [an] online business . . . that it really comes down to just doing it and figuring out your way around it and trying to see what others are doing and grab from that, as opposed to being told what to do.

“Whether or not you’re learning things at school, you just don’t want to get stuck in the mindset that by following these steps it’s going to lead to something — you really just need to get into it and figure it out.”

Editor’s note: This story has been edited to reflect the fact that Justin Tse works directly with LG and Samsung, not Apple. We regret the error.