UVic student assaulted while jogging on campus in daylight 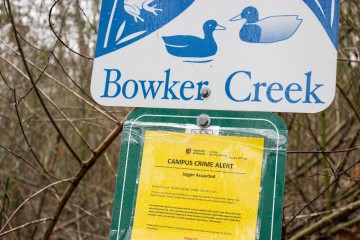 An assault on campus yesterday and an incident earlier that day with another woman in Oak Bay have police and campus security conducting extra patrols. An 18-year-old UVic student was jogging the Alumni Chip Trail when she was tackled from behind by an unknown man. Saanich Police issued a press release with some details.

The assault happened between Lot 8 and the McKenzie Avenue-Gordon Head Road intersection shortly after 3 p.m. Feb. 27. The student was jogging alone when a man passed her in the opposite direction. A minute or less after he passed, the man tackled her from behind, landing him on her back and her on her front to the ground. She kicked him, and he rolled off her clenching his groin. He said nothing, and she was uninjured. The student then ran to her residence building and called police.

The assailant is described as a Caucasian man, 25 to 35 years old, between 5’9” and 6’2”, with short brown hair. He wore a grey hoodie with a black Nike swoosh on the left breast, black shorts, black runners with white Nike logo, and white iPhone-type ear buds.

At the time of the assault, Oak Bay Police were investigating a report from about 2:30 p.m. of a suspicious man in the Henderson Field area. A man of similar description to the chip trail assailant had approached an 18-year-old woman who was walking and “made her very uncomfortable by cinching his hoodie tight over his head,” according to Saanich Police. This man didn’t speak to or make physical contact with this woman.

The Saanich Police press release recommends walking or jogging with a partner, carrying a cellphone and being vigilant of surroundings, as well as keeping ear bud volume down in wooded areas.