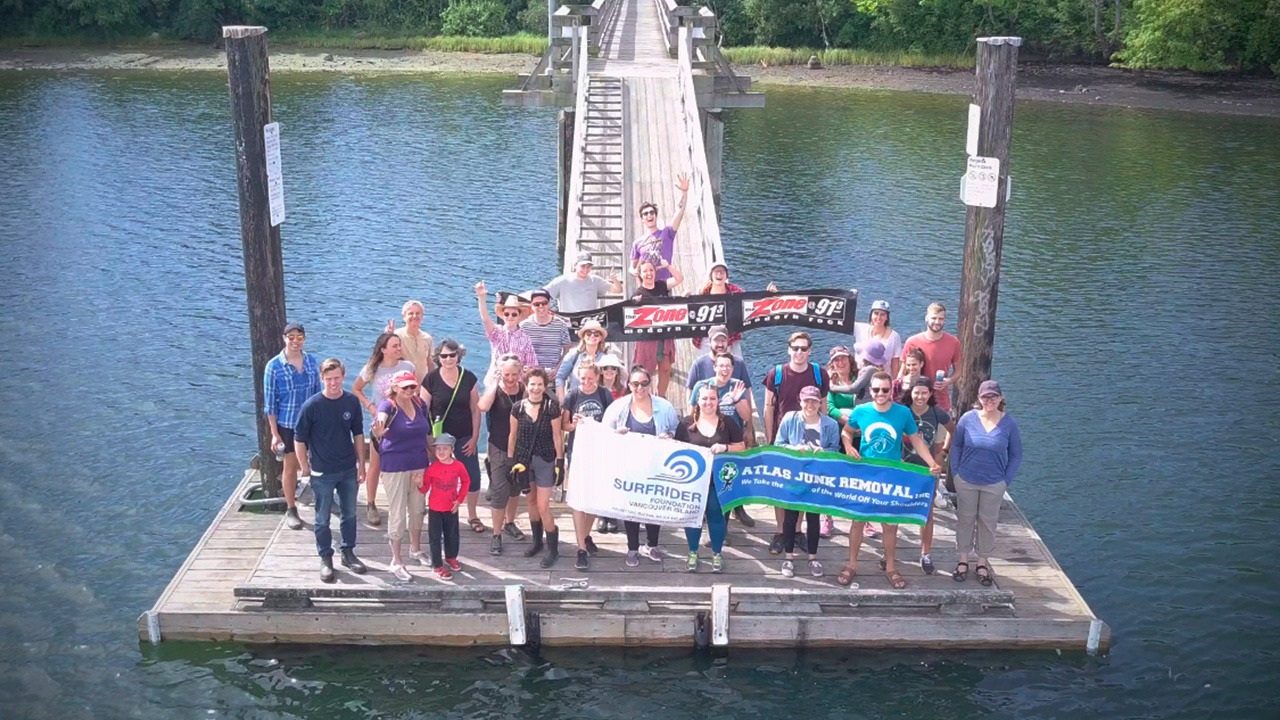 The cleaner-uppers celebrate picking up 1 000 pounds of garbage at the Gorge Waterway. Photo provided

It’s safe to say that Levi Hildebrand is a busy man.

After travelling through Europe last semester to create video content from the Netherlands and Switzerland for 1 300 (and counting) YouTube channel subscribers, the vlogger from 100 Mile House, B.C., arrived back in Victoria, to a group of friends begging for one more video.

“I think they just saw me as the perfect person to apply, and I had like four or five friends be like ‘Dude, you should do this.’ And by like the fifth one, I was like ‘Yeah, I know. I’m on it.’” Hildebrand says, laughing and sipping tea on a chilly mid-July morning at Habit Coffee downtown.

Hildebrand’s friends thought he would be the perfect applicant for the City of Victoria’s ‘BYO Bag’ video contest, a competition to promote the use of reusable bags and the overall reduction of plastic waste in the community in the wake of the city’s July 1 checkout plastic bag ban.

With a promise of up to $1 000 in winnings, Hildebrand and his video partner and fiancée Leah Tidey created a one-minute video clip to show all the different alternatives to plastic bags that Victorians can use.

The video, titled ‘Leah’s Ditching Plastic Bags,’ showed Tidey using a variety of plastic alternatives — from reusable fabric bags to baskets. It was selected as one of seven finalists for the $500 ‘People’s Choice’ award.

After the voting period, Hildebrand’s video was selected by a jury as the top video in the Youth and All Ages category and voted as the People’s Choice winner, winning him a total grand prize of $1000.

“I find the way that environmentalism is approached is super destructive, it tarnishes completely what the idea is, and that is to preserve and protect the things that are beautiful in our natural environment.”

Despite being a cash-strapped, recently engaged student, Hildebrand made the decision to give back his winnings to his community, using the $500 from the People’s Choice award to host a beach clean-up day in July.

“I was just saying to my fiancé, ‘What if we won the People’s Choice and we won the First Choice [award]? We could just use that $500 and just do a big beach clean-up or something?’” Hildebrand said. “I’m like, ‘We’ll get super dramatic about it, make a big video about it, and there’ll be a launch, and then newspapers will pick it up, and it’ll be all epic!’ And that’s kind of exactly what’s happened.”

In partnership with the Surfrider Foundation, a global non-profit organization protecting oceans and beaches, Hildebrand and Tidey organized the clean-up at the Gorge Waterway in West Victoria on July 8. They wanted it to coincide with ‘Plastic Free July’ —  a movement started in 2011 that has inspired over two million people across 159 different countries to ditch single-use plastic waste in the month of July.

“The whole point of this channel is . . . to make people go ‘Hey I wouldn’t have normally gone to a beach clean up, but I came out to a beach clean-up and here I am laughing with my hands in the mud.’ That’s just great.”

While visiting his parents back home in 100 Mile House after winning the competition, Hildebrand and Tidey were stumped on how to organize the clean-up. Surfrider offered some suggestions.

Still in 100 Mile House, Hildebrand spent the week confirming dates, promoting the clean up on his YouTube channel, and spending the winnings on items from local shops in Victoria to give away to volunteers that showed up for the clean-up.

“We took the $500 and spent $330 on just prizes alone,” Hildebrand said. “Then donated $150 to the Surfrider organization afterwards as well.”

In the end, over 50 volunteers showed up and cleaned up 1000 pounds of garbage off the shores of the Gorge Waterway. 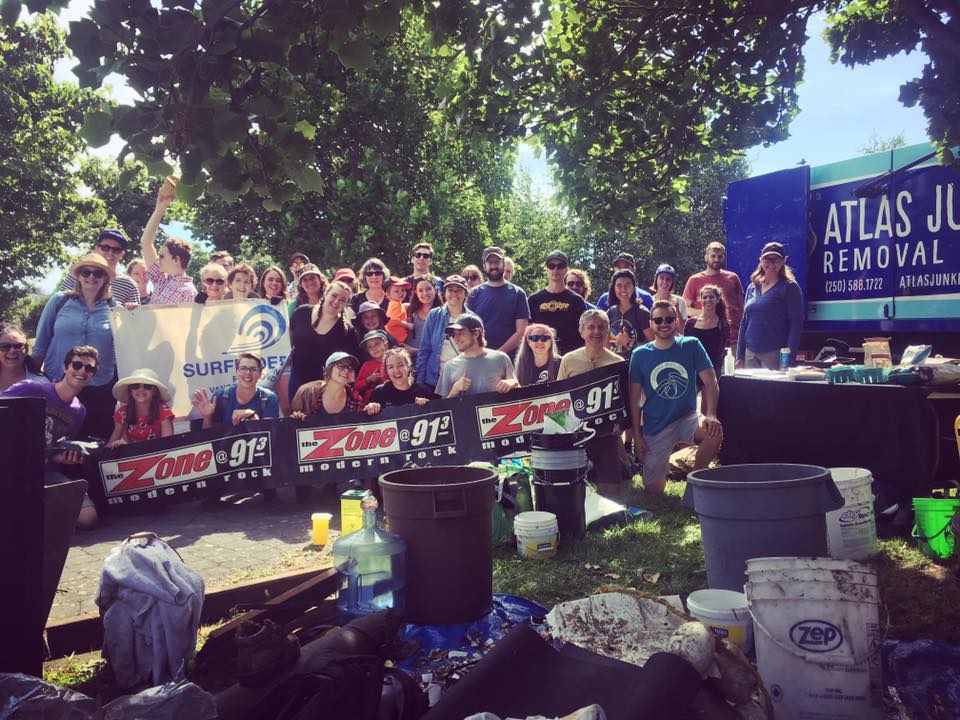 “Normally [Surfrider] get between five people to show up and usually the average is around 10, and so we brought out more than five times the normal number of people to show up,” Hildebrand gushed.

This isn’t the first time the UVic student has promoted environmentalism. In April 2017, he hosted an event on campus for students to dump empty coffee cups on his head, to physically represent the 3 000 coffee cups tossed in campus garbage cans every day.

“I’m a bit of an egomaniac to begin with, like I wanted to be an actor and that was my first desire, and I got sort of exhausted with that because there was no purpose,” Hildebrand said.

“After a while I figured out what I was passionate about, and it’s environmentalism. But, I find the way that environmentalism is approached is super destructive, it tarnishes completely what the idea is, and that is to preserve and protect the things that are beautiful in our natural environment. And the way that it’s pitched is, ‘Don’t do this, don’t do that, take this out of your life, do less of this’ all these things, and it’s super negative.”

In everything he does, Hildebrand promotes positivity. He’s currently working to organize a second clean-up in early September with Surfrider in a remote location on the mainland, and he’s planning a ‘Good News’ bike-ride event in partnership with U-bicycle to bike around downtown shouting positive news headlines on the lime green bikes later in the summer.

“Just to see a bunch of people getting together and participating with something I believe in, and just having fun, messing around — I’m like, ‘That’s it.’ That’s it, that’s the whole point. The whole point of this channel is to get that to happen. To make people go ‘Hey I wouldn’t have normally gone to a beach clean up, but I came out to a beach clean-up and here I am laughing with my hands in the mud.’ That’s just great.”