UVic student helps herself and others through mental health awareness

When Dana Neily talks about her struggles with balancing mental health and schoolwork, she appears calm and collected — like she’s had this conversation before. Perhaps her nonchalant attitude comes from her years of raising awareness of mental health issues in her community.

Vice-president of the Mental Health Awareness Club at the University of Victoria, Neily has spent her time at school working to further improve mental health initiatives available to students on campus. Neily does not hold back. She is a warrior, ready to fight her demons — and yours. Her weapon of choice: awareness and resources.

Neily is one of many students who suffer from mental illness while simultaneously balancing responsibilities such as school work and employment. According to Canada’s leading mental health hospital, the Centre for Addiction and Mental Health, one in five Canadians will deal with mental health issues in their life. Based on this statistic, approximately 4 000 of UVic’s 22 000 students may experience mental health issues at some point.

This is where Neily and the rest of the Mental Health Awareness Club come into play. Together, they work tirelessly to raise awareness of the resources on campus and, when those resources fall short, resources within the community. 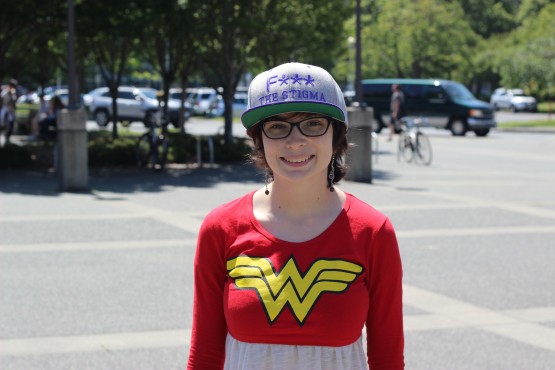 UVic student Dana Neily, wearing one of the official UVic Mental Health Awareness hats, is a vice-president of the club. Photo by Cormac O’Brien, Editor-in-Chief

Despite her current comfort with discussing issues of mental health, Neily hasn’t always had a grasp on the nuances of dealing with a mental illness.

“I first manifested depression when I was around 11 years old,” Neily says, going on to describe experiencing panic attacks when she was as young as three years old. Her younger self could not control the flood of emotions brought on by an anxiety disorder, and Neily found herself confronted with many of the common symptoms of such attacks — such as hyperventilation, overstimulation, crying, and not being able to communicate her experiences to others.

Neily did not realize her experience was atypical. “I assumed everyone had the same problems,” she says. “[I thought] they were just better at hiding it.”

Despite mental health impacting her at such a young age, she didn’t receive a formal diagnosis until she was 17. This is when she began to identify as neuro-atypical. “It’s when your brain is a little different than others,” Neily says lightheartedly.

Not recognizing struggles with mental health as an atypical experience is a common trend among youth, Neily explains. “People assume it’s just a part of life — one that they’re not dealing with well enough.”

Neily also takes issue with the language used to address mental health. “A lot of people said I was sensitive, or upset,” Neily says, “[But] ‘upset’ is a word that can be applied to anyone. I didn’t have the vocabulary to say I was depressed. I could only say I was sad, which doesn’t warrant the same help.”

Neily advocates for more open discussion about the realities of mental health, especially with youth. She insists that education can be the key to helping young people deal with mental health issues in a healthy, productive way. “I would be happy if I could spend my life trying to mediate [mental illness] for others,” she explains. “A lot of people don’t realize that their experience is atypical. They don’t know they can be treated and that their quality of life can improve.”

The first time Neily remembers learning about mental illness was in the eighth grade, but in a very limited manner. The school touched on only the extremes of a spectrum where the majority fall somewhere in the middle. Neily struggled with mental illness at the time, but the lessons were unrelatable; she was unable to identify with and didn’t take anything away from them.

Neily knows that this is not an uncommon experience with mental health education among youth. Students often report having little to no education on the matter, and she wants to change that. She knows of the many resources out there for youth struggling with mental illness, and is also aware that most youth know nothing about them. In her experience, it is very important that people know about the resources available to them before they experience a bout of depression. This way, the resources are available and ready when they become necessary.

“I’ve gotten so many deferrals. I’ve had to drop courses after the due date. I’ve gotten notes from doctors. There are still days where I can’t go to class,” she explains. “It’s hard.”

But Neily has found ways to cope. She expresses her strongest emotions through writing, and this helps her manage the stresses of everyday life. She has made writing a habit in her day-to-day life, so much so that she is able to write even on her darkest days.

“My poetry and mental health are one and the same,” she says. “I’ve been writing poetry since I knew what poetry was.”

Neily shares this writing, too, and has been an active participant in the Victoria spoken word community for the past year and a half. She is looking forward to representing Victoria in the Voices Festival of Words next April. Despite the success she has found with poetry, Neily believes the real value in it is the ability to care for and express herself, ultimately improving her mood.

Like many others, Neily’s use of artistic expression aids in her daily struggle, but does not eliminate it. Her story goes to show that even those who do their best to fight the stigma surrounding mental illness are not immune from its trials and tribulations. Neily acknowledges that she still has her bad days and that she will have ups and downs for the rest of her life, but whether it is hard or not, Neily is living proof it can be done.

You can visit the UVic Mental Health Awareness Club on their Facebook page. You can also visit UVic Counselling Services in the University Centre, or book an appointment by calling 250-721-8341.

This story was corrected to fix an error referring to Neily as the co-founder of the Mental Health Awareness Club. She is a vice-president.