Based on British Special Ops military training, Tough Mudder is anything but an easy race. The event, started in 2010, demands physical as well as mental strength, endurance and teamwork of the participants in the form of 16- to 19-kilometre obstacle courses.

One of these Mudders is Lindsay Van Gyn, a UVic anthropology student and personal trainer in Victoria. She first decided to be a part of the exhausting events at the 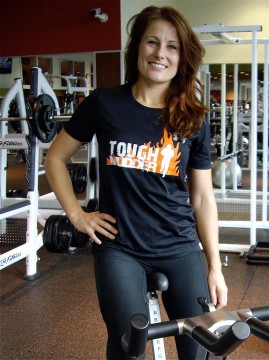 Whistler race in June. At the Seattle Tough Mudder on Sep. 29and 30, Van Gyn was the first woman to cross the finish line. This qualified her to compete at the World’s Toughest Mudder — the season’s final event on Nov. 17 and 18 in Englishtown, New Jersey. Van Gyn is fundraising to get there, and to support the iBellieve Foundation.

Tough Mudder not only challenges athletes; it also raises money for the Wounded Warrior Project, an organization that raises awareness and provides programs for wounded American military service men and women. So far, more than $3 million has been raised through Tough Mudders worldwide. Tough Mudder participants are encouraged to do charity work individually as well, and although the Wounded Warrior Project is the preferred institution, other foundations can also be supported.

And that’s what Van Gyn has decided to do. She supports the iBellieve Foundation, which was brought to life by Simon Ibell, a former St. Michaels University School student. The iBellieve Foundation’s goal is to find a cure for Mucopolysaccharidosis II (MPS II or Hunter syndrome) and bring awareness to this rare disease and similar metabolic disorders. MPS II causes progressive cellular damage, which affects appearance, physical abilities, organ and system functioning.

Van Gyn says Ibell inspires her, “Simon has done a lot for sport … Not only with his iBellieve Foundation, but with Canadian basketball. He’s also worked closely with the Right to Play … He’s been inspirational.”

However, she is not only trying to raise money for her chosen foundation; she also wants to fund her participation in the World’s Toughest Mudder. Only five per cent of the 500, 000 finishers of all the Tough Mudder events around the globe are invited to this final, 24-hour event, and Van Gyn is one of them.

She calculates that $2,000 would be enough money for her to take part in the World’s Toughest Mudder. “The fundraising is going really, really well … This is an expensive international athletic event, and I’ve luckily reached my goal of what I think I need to stay down there and go through the event. So, what I’m really, really hoping for now is that last week — that we have a good push so that I can raise enough money to give Simon a cheque to make a difference in his research,” says Van Gyn about the fundraising.

Tough Mudder participants are advised to not take themselves too seriously — it is very likely the athletes will run through the finish line completely covered in mud. Team spirit is an important part of the events; having a good time is at least as crucial as the athletic side of the event.

Van Gyn also explains that Tough Mudder is about accomplishment, not winning. “The idea, actually, behind Tough Mudder is that it’s not a competition; [it’s] that it’s a personal challenge, which I really enjoy. It takes that nervousness out for me. I’m a highly competitive person. So, I like the idea of just doing it for myself.”

You can donate to her cause here.