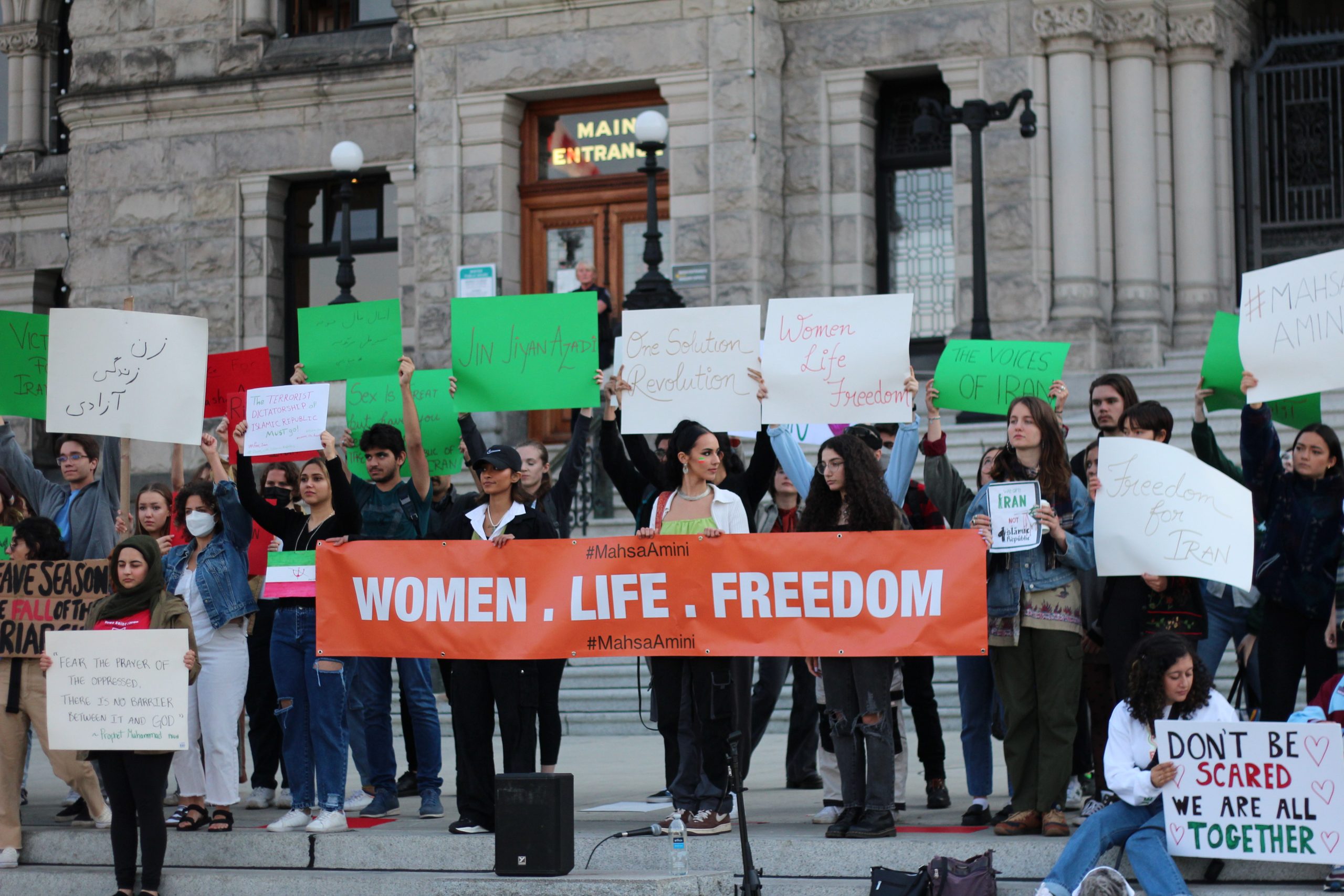 Students and community members gathered outside the Parliament Buildings after walking out of class to show support and raise awareness for ongoing situation in Iran. Photo by Isabella Kennedy.

In September, massive protests began in Iran and have spread like wildfire throughout the world. The movement and its motto, “women, life, freedom,” were sparked by one event.

On Sept. 13, Zhina Mahsa Amini, a 22-year-old Iranian woman of Kurdish descent was taken into custody in Tehran by Iran’s Guidance Patrol — commonly referred to as the morality police — when they deemed her hijab to be covered “improperly.”

Three days later, on Sept. 16, she died in police custody. Iranian authorities stated her cause of death was a heart attack, but other reports and Amini’s family have put that into question. The reports showed damage in the brain that could have been caused by severe blows to the head. Iranians around the world are blaming the Iranian authorities for the death of Amini.

Over 300 protesters have been reportedly killed in the wake of these events, some of them children. Many Iranians are calling for freedom from the Islamic Republic. Women have been seen cutting their hair and burning their scarves in protest and mourning. The Iranian government has been cutting off internet access, leaving those living outside Iran in fear for their loved ones.

Since September, students at the University of Victoria have been organizing and speaking at protests and gatherings to raise awareness about the ongoing situation in Iran.

Kimia Mirzaei, a third-year biology student at UVic, has been heavily involved in organizing events and advocating for the Iranian community in Victoria. Mirzaei was born in Iran and most of her family members are currently living there. She has many friends in the country as well.

“We’re trying our best to do everything, but I feel like it’s just helpless. I don’t know what more I can do,” Mirzaei said in an interview, describing the experience of those part of the Iranian diaspora. So far UVic students and community members have led several gatherings in support of Iran.

“I go to class, but I can’t focus on anything because I’m checking my phone every five seconds to see if there’s any other news,” she said.

One of the events Mirzaei helped to organize was a walkout where UVic students and community members met at the B.C. Parliament Buildings downtown. At that event, 65 people stepped up to cut their hair and put the cuttings in envelopes. These are being sent to the United Nations (U.N.) as part of a call to remove Iran as a representative on the U.N.’s Commission on the Status of Women, a global body for women’s equality and empowerment. 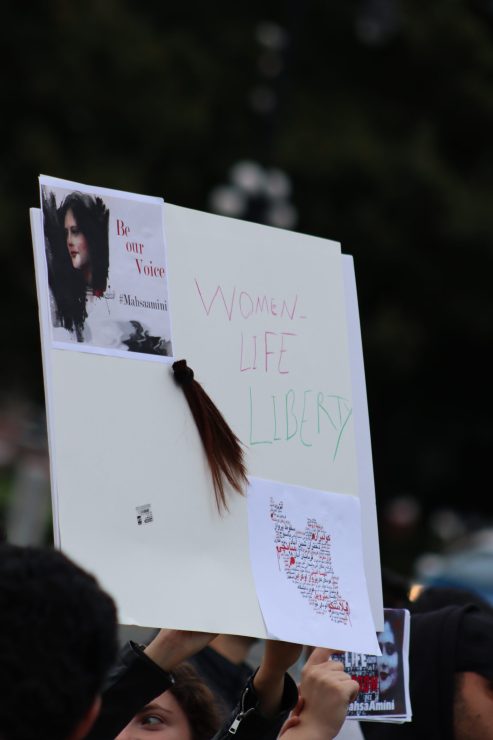 People have been cutting their hair in support and mourning. Photo by Manmitha Deepthi.

“Basically the hair is making a statement for us because it is showing the grief in Iran. It’s kind of a tradition when you’re sad and when you’re grieving you would cut your hair,” said Mirzaei.

“We are doing that … as a reminder that these protests are happening in Iran and these people are basically committing a genocide, or femicide, and the [U.N.] is letting them be a part of [their] commission.”

Leaders of various nations have taken a stand for Amini, with Prime Minister Trudeau condemning Iran for not respecting human rights and announcing Canada’s support for Iranian families and women. Although Mirzaei and others believe more can be done.

UVic has also come forward with its own statement of support, and held panels to both raise awareness and educate the university community on the situation. For one of these, Mirzaei was a panelist and spoke about how her life has changed since the movement started.

“Many members of the UVic community have deep connections to Iran, including connections to family, friends, and colleagues living in Iran today,” the university said in its statement. “You are all in our thoughts and we’re here to support you.”

Mirzaei said that things students can do to help is amplify the voices in Iran by posting on social media and signing petitions. She also reminded students what’s at stake for those with connections to Iran.

“If this revolution doesn’t actually happen, any of us who participate in this we’re not allowed to ever go back to Iran anymore,” said Mirzaei.

“When someone who’s not Iranian — has no connection to it — when they speak up they aren’t actually losing anything … but when we’re doing this we’re risking the possibility of never seeing our loved ones again.”

Iran is still in the midst of uncertainty with protests and strikes ongoing. There is a lot of grief and anger from its citizens who are fighting for a change in the system.

The University of Victoria has on-campus support for students, staff, and faculty who have been affected by this situation on their website.