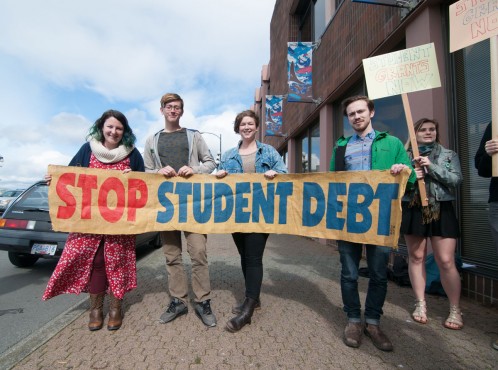 Member of the UVSS stand outside the ICBC office on Wharf St. to deliver a petition to NDP MLA Cathy Corrigan. Photo by Hugo Wong (Editor-in-Chief)

On March 24, students will rally outside the downtown ICBC office with over 3,000 signatures on a petition demanding more needs based, non-repayable student funding from the B.C. government. With students struggling to pay tuition fees and student loans, B.C. remains the only province in Canada without a needs-based funding program.

“Students have a lot of debt, but they think it’s level across the country,” said Brontë Renwick-Shields, the incoming chairperson of the UVSS. “We’re building awareness with this petition that it is an even bigger problem in B.C. than it is anywhere else.”

The petitions will be delivered to the NDP Critic for Advanced Education, Kathy Corrigan. After being contacted by the UVSS, Corrigan agreed to accept the petition, as well as eventually read them out in front of the Legislative Assembly.

The petitions will be handed off in front of the ICBC office in protest of the recently proposed legislation that would enable the B.C. government to revoke driver licences of individuals who are not paying back student loans.

“[It’s] a punitive measure that tries to address a systemic issue,” said Greg Atkinson, the current director of external relations for the UVSS. “Instead of punitive measures, we should be looking at more support systems for students.”

The UVSS has been collecting the petitions for over a year now, partly at the free soup events held at the SUB. “There’s a theatrical shtick to that in the fact that students can’t afford to feed themselves,” said Atkinson.

While B.C. once had a system of needs based, non-repayable funding, the program was cut in 2004 under the B.C. Liberal government. Today, however, B.C. students are graduating with the most debt in the country. Comparatively, the government of Newfoundland and Labrador completely replaced provincial student loans with non-repayable grants last year.

“The fact that the B.C. government is seeking such a bizarre and extreme punishment because students aren’t able to pay back their debt just showcases how much debt students have and how hard it is to pay back that amount,” said Renwick-Shields.

While members of the UVSS feel confident about making this change in the coming years, incoming Director of External Relations Kenya Rogers remarked that it is still a process. “All of these things we are doing are steps towards a goal,” she said. “The ultimate goal is that we would have a needs based grant system reimplemented. Until that goal is achieved we want to keep the momentum up.”

For more information on the Student Grants Now petition and rally visit facebook.com/events/346596978879851