Last fall, Sarah, a UVic student, went swimming at McKinnon pool. To keep pace with a friend, she borrowed a pair of too-small flippers from the facility. When she put them on, she didn’t notice the small cuts on each of her big toes.

After walking back to her dorm room wearing slides, Sarah used Polysporin to clean the cuts, however, just a day later, she knew they were infected.

Sarah would spend the next days struggling to walk to her classes and making phone calls to clinics, desperate to get a prescription for antibiotics. After nearly a week Sarah decided she would have to go to an emergency room (ER) to finally see a doctor about the infection she had tried to prevent.

“I shouldn’t have to worry about not being able to recover from an infection,” said Sarah, whose name has been changed upon request due to the personal nature of this story.

With family practices closing in Greater Victoria and across the province, many people have found themselves in the same position as Sarah. According to Statistics Canada, 17 per cent of British Columbians were without regular health care providers in 2021. In Greater Victoria this number is even higher. Just over 24 per cent of people in Greater Victoria were unattached to a regular physician in 2017. Those with and without family doctors also face high clinic wait times and ER closures, making it increasingly difficult for people, including students, to access the health care they need.

Like many students, Sarah left her family doctor behind when she moved to Victoria. In an interview with the Martlet, Sarah called the transition “a complete 180.”

“I always have the worry of ‘what if I can’t get an antibiotic?’” she said.

The importance of primary care is something Hannah, another UVic student who works as a medical office assistant at a family practice, is all too familiar with. Hannah’s name has also been changed upon request to protect her future employment.

According to her, university students are one group that often falls through the cracks when it comes to primary and preventative care.

“Young people are one of the main demographics that [get] under-prioritized because we are typically healthy,” said Hannah.

According to Hannah, not having a primary care physician makes accessing the health care system more difficult for students, many of whom are young and inexperienced with things like booking appointments and dealing with health insurance.

“We’re not given a guide on how to navigate the health care system,” said Hannah, who experienced these challenges herself when her family doctor retired at the beginning of the pandemic.

“It’s scary to have stuff going on and not be able to rely on somebody.”

Hannah also noted that without a family doctor, patients are expected to explain their medical history each time they seek care and that it poses a problem with medical records. Not only can obtaining your medical records without a primary care physician be difficult, but it can involve paying some administrative fees. According to Hannah, she has also experienced issues refilling medication as a result.

“Every single time I tried to get medication for [ADHD], which I need to help me function, they just act as if you’re drug seeking, and they ask to see every single document that proves it,” Hannah said. “It’s really frustrating.”

In August, the B.C. Ministry of Health announced an expansion of the province’s primary care strategy. In partnership with Doctors of BC, $118 million will be available to family doctors and primary care clinics. More than 70 per cent of family doctors in the province are expected to receive funding, which will help cover operational costs. The B.C. Ministry of Health also recently released plans for their expanded multi-year strategy to fight the health care crisis that prioritizes retention of healthcare workers, redesigning the system to focus on team-based care, recruiting, and training workers. Some of actions that will take place in 2022-23 include increasing seats available in medical programs at UBC as well as allowing pharmacists to prescribe contraceptives and medication for minor ailments.

While UVic has a Student Wellness Centre, which is open to current students for ongoing care and rapid access appointments, Hannah was unaware of the service until recently and has since struggled to get appointments.

“They have great doctors, and they do their best, but it’s slow to get in there unless you’ve got an urgent issue,” Hannah said. “They’re swamped.”

The Student Wellness Centre was the first place Sarah attempted to seek care when she realized her toes were infected. She said that each time she called for a same-day appointment, the clinic was completely booked. After being turned away over the phone, Sarah decided to go to the clinic in person. When she arrived, the appointments were once again filled up. Sarah felt desperate to make someone understand the severity of the infection, asking a passing nurse to have a look, however, she says she was still turned away.

“[It’s] very disappointing considering students are paying a good portion for that centre to be functioning,” Sarah said. “Shouldn’t we [have] some urgent walk-in appointments for students that really need a script really quickly?”

While some students report having had good, timely experiences getting into the Wellness Centre, Luca hasn’t been as lucky. Luca has requested his last name be omitted due to the personal nature of this story.

“Multiple times, I’ve called them at 8:30, and they just don’t answer,” he said. “The one time that I did get a same-day appointment, I camped outside the building 30 minutes before they opened.”

A representative from the university wrote in an email to the Martlet that they advise students to call or visit the centre as early as possible for urgent appointments.

In addition to same-day appointments, the Wellness Centre also offers scheduled appointments for less urgent issues. However, some students say it’s just as difficult to get in to see a doctor this way as it is for an emergency. According to Luca, the wait times he’s experienced are sometimes over a month.

“It’s frustrating because I’m only able to book an appointment every five weeks,” Luca said. “If there’s a problem with one of the medications, unless it’s really an emergency, I’m not really able to bring that to my doctor’s attention.”

For Luca, this also poses an issue when he needs to refill his prescriptions. As a result of wait times, he has run out of his medication on multiple occasions and was forced to rely on emergency refills from pharmacists.

“The team works as hard as they can to provide timely support to students in need,” read the email from UVic. “Unfortunately, with the current health care crisis affecting people nation-wide, demand for services at the centre remains high. If you are a student from BC and have a positive relationship with your family doctor, we encourage you to maintain that relationship [and] to book ahead for routine appointments like prescription renewals.”

The university also encourages students to try other walk-in clinics in the area. However, this is an option that all three students have essentially written off.

Hannah echoed this frustration with the lack of options for those without family doctors. “All those family doctors closing their offices means that people are forced to go to urgent care [clinics],” she said. “They open around 9:00. If you call them at 9:07, they are filled for the day.”

According to the Medimap Walk-in Clinic Wait Time Index, Victoria had the highest wait times in the country in 2021. Patients waited an average of 161 minutes at clinics in Victoria, 136 minutes longer than the national average. The index also revealed that B.C. has the highest average wait time of any province.

With no family doctor and no luck getting into a walk-in clinic, many people like Sarah are left with no choice but to make a trip to the ER.

“After a certain point, I throw my hands up in the air and say ‘I have to go to the ER because I’m not going to get health care any other way,’” Sarah said.

At midnight on a school night, Sarah headed to the ER where she waited between five and six hours for a doctor to look at her toes. The first doctor to examine her told her that the discolouration was just bruising. However, after she asked for another opinion, it only took the second doctor a moment to recognize the signs of a Staph infection and rush to get antibiotics.

While Sarah’s infection was an emergency by the time she went to the ER, according to Hannah, many people are forced to go for less urgent issues.

“I know multiple patients that have gone to the ER for routine prescription refills because they just can’t get in for an appointment,” said Hannah. “I know people that have gone to get a mole checked out while they’re waiting for a dermatology [appointment] because that’s what the wait lists are like.”

However, with some staffing shortages and ER closures, getting care at a hospital is also no longer as easy as it once was. 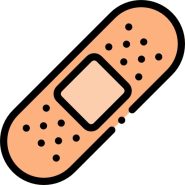 “Island Health acknowledges this is not an ideal situation for the community and we sincerely apologize for any inconvenience experienced by this temporary service interruption,” they read.

“Being able to go out and get a script for something minor has just turned into a huge issue,” said Sarah. Worries about wait times and uncertainty around obtaining health care have caused some of her friends to keep leftover antibiotics on hand, afraid they won’t be able to get a prescription fast enough.

Luca shares these concerns about whether he could find care if he were injured or sick. “It feels scary knowing that we don’t have enough doctors,” he said. “Where I’m from, I’m used to being able to give my family doctor a phone call and have him respond within 12 hours, so not having that safety net is scary.”

Sarah has also taken her health into her own hands since recovering from her infection. She now keeps iodine and antibiotics on hand in case she gets another infection.

She considers herself lucky to have people in her family who work in pharmaceuticals because her knowledge of infections helped her recognize the signs of serious infection and care for the wounds until she got help.

“I came forward with my story because I figured it was pretty damn extreme, and I should probably say something so this doesn’t happen to somebody else,” Sarah said. “If it wasn’t for me going to the ER, it would have gotten worse, and it would not have ended well.”

This article was updated Oct. 1 to include information about B.C.’s new health workforce strategy.