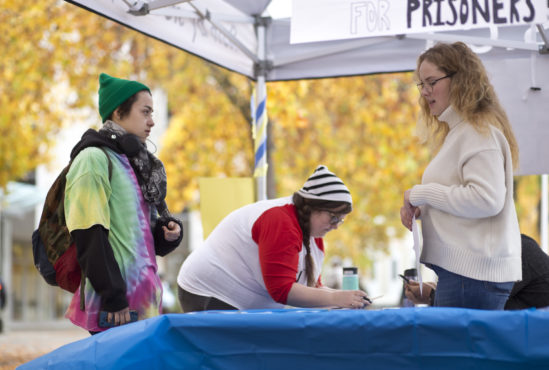 On the misty morning of Oct. 24, members of the UVic community gathered at Petch Fountain to write postcards for individuals imprisoned on the other side of the globe. The event, called Postcards for Prisoners, is an international movement brought to campus by the UVic Ukrainian Students’ Society [USS].

Each of the postcards, inscribed in Russian cyrillic with messages of hope and solidarity, will be sent to the approximately 70 Ukrainian prisoners that have been detained by Russia since May 2014.

“We are reminding them that they are not forgotten,” said Willa Hladun, a third-year psychology student who is the co-founder and social media coordinator of the USS. “Hopefully every postcard they receive will lift their spirits.”

Students were able to write to any of the prisoners, whose names were listed along with the sentence they had been given by the Russian government.

“I hate to feel helpless, so doing something like this is a way to combat that feeling.” 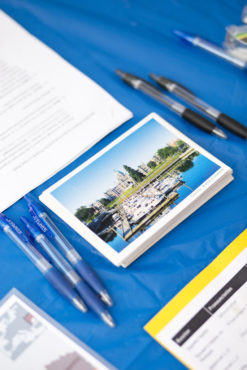 Many of these individuals’ imprisonments, like filmmaker Oleg Sentsov, who is serving 20 years in prison for terrorism charges alleged by the Russian government, have been condemned by the international community.

“[The prisoners] have it rough right now, and we just want to make sure that despite these conditions around them, they [know] there’s a whole global community that’s here to support them and get them through this,” said Chase Gargus, vice president of the USS and a third year in biopsychology at UVic.

“We want to send them postcards and let them know that they’re not forgotten and that their struggles are recognized.”

Each postcard carried a simple message like “we remember you” or “we hope you get through this,” translated into Russian using Google Translate or a prepared phrase sheet provided by the organizers.

This was the USS’s first major undertaking since their inception in September. As part of the Ukrainian Canadian Students’ Union, they were encouraged to participate in Postcards for Prisoners, and chose to partake due to the passion club members had for the subject of the event.

“Ukraine has been through a lot, and continues to be bullied by larger and longer-established countries,” said Hladun. “A lot of people still don’t know about the Holodomor (an artificial famine in the 1930s that killed millions of Ukrainians under the Soviet Regime) or the annexation of Crimea, so we believe it’s our duty as a Ukrainian Student Society to bring these events to the attention of students.”

“I believe students have more power than they think they do, and I believe it is a responsibility to use our freedom to assist those who do not.”

Devon Goldie, president and co-founder of the USS, hoped that there would be one  postcard written for each of the 70 prisoners. By the end of the day, students had written 76 postcards.

“I hate to feel helpless, so doing something like this is a way to combat that feeling,” said Hladun. “It’s a small but powerful gesture.” 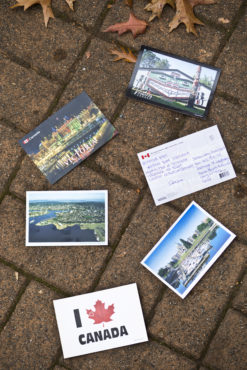 It’s important to recognize and support others who do not have their rights protected to the same extent as Canadians, Hladun said. One of her goals was to use this event to raise awareness for all the Ukrainian journalists, filmmakers, and activists who have been jailed for protesting.

“A lot of Canadians are Ukrainian, so it is a pretty big deal,” said Cameron Leckenby, a fourth year art history major who is also in the Russian language certificate program.

Though Leckenby has mixed feelings about the conflict in Ukraine, he felt it was important to stop by the event to send the prisoners messages of hope and peace. Leckenby said that since he knows a bit of Russian, he was able to personalize his postcard.

Although the USS expected some backlash from pro-Russia groups, Hladun said everyone was respectful.

“We did have people who were Russian, from Russia, come over and say ‘We don’t support what Putin is doing, we want to write a postcard,’” said Goldie.

Gargus hopes that this event will inspire students and other members of the campus community to take an active stance in global events. Particularly with the position of privilege and relative power Canadians have, he says that it is important to be aware and involved.

“I believe students have more power than they think they do, and I believe it is a responsibility to use our freedom to assist those who do not,” Hladun said.

“Even though we physically cannot be present, words are powerful, and the more awareness we spread, the more people will listen.”