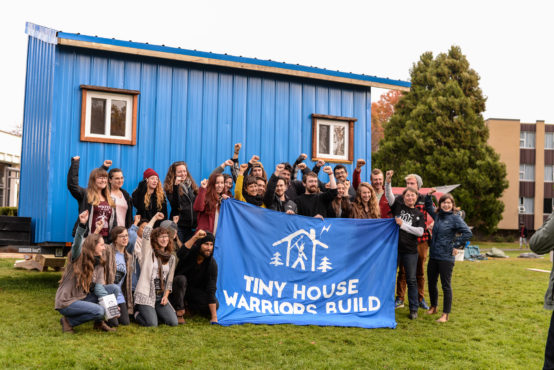 The original plan was to have the tiny house be the central tenet of a week of decolonization and indigenization-focused workshops. But due to changing weather, volunteer burnout, and insufficient time to organize workshops, the house was moved off campus ahead of schedule.

“We were starting to struggle to cover all the [volunteer] shifts and as organizers we were also starting to have a little bit too much in terms of planning and making sure everything was covered up to the university’s conditions,” says Stacie Swain, one of the build’s head organizers.

The 16-by-seven-foot blue house was started nine days earlier and is now ready to shelter a Secwepemc family and provide a node of resistance against the Trans Mountain Pipeline project, over half of which, if built, will cross Secwepemc territory.

Catherine Wallace, lead builder of the UVic tiny house project, says it was an exhausting but energizing process.

Swain estimates over 150 volunteers helped over the course of the nine-day build. 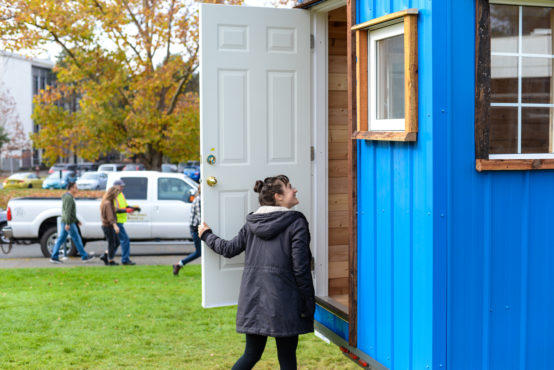 “Every night I [would] wake up somewhere around three or four in the morning — just boom! — thinking of all these things I have to do and how we’re going to do them and how scared I am to do some of them,” she says. “But it’s good to scare yourself once in a while. It’s a challenge, not a dangerous scare, an exciting scare, an accomplishing scare.”

That’s not to say there wasn’t loads of support for the build, and while it may have been stress-inducing at times, it was also stress-relieving.

“I might have been stressed out about my classes or something, but whenever I came here I just felt joy at all the people doing something together in the sun,” says Emily Thiessen, another one of the build’s head organizers.

“It was great to see just how many people helped put this together. On most days we had over 10 builders at once, which I know made Catherine [Wallace] very happy.”

Swain estimates over 150 volunteers helped over the course of the nine-day build.

“This is what solidarity looks, right here”

“This is what solidarity looks, right here,” said Secwepemc traditional birth keeper Kanahus Manuel when she visited the build. Manuel was the originator of the Tiny House Warriors after being inspired by the resistance efforts against the Dakota Access Pipeline in the United States.

“This is halfway to our goal — number five tiny house here being built at UVic.”

Wallace, who has now volunteered her time and carpentry skills for two of the 10 tiny house builds, says her job is the easy one.

“[Indigenous people] are the ones on the front lines. I’m back here just building stuff. They’re out there, on the front lines, getting abused. There’s violence coming at them from all sides. So many missing and murdered women and children, so my part’s easy compared to what they’re doing,” says Wallace.

“We wouldn’t be where we are right now without the Indigenous people and what they’ve been doing and their resurgence in resisting all these terrible projects, so I am just so with them, you know, and the house is part of that. It’s their shelter.”

At time of writing, the UVic Tiny House Build is less than $1 500 short of their $15 000 fundraising goal. To donate, visit https://chuffed.org/project/tiny-house-warriors-resurgence-edition