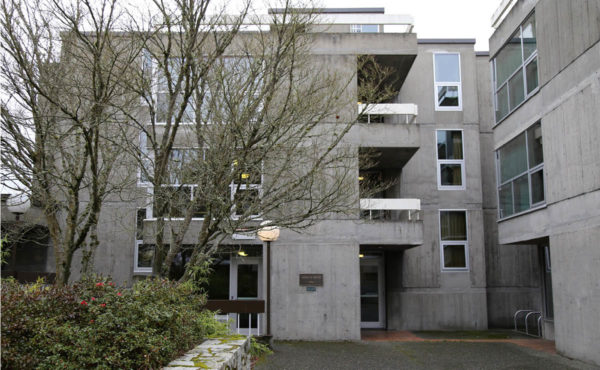 UVic has removed the name of Joseph Trutch from one of its residence buildings (pictured). Photo by Belle White, Photo Editor

In a decision made at the May 30 Board of Governor’s meeting, UVic will remove the name of Joseph Trutch from the corresponding residence building within the Landsdowne Residence Complex.

A press release from the university explained that Trutch’s “particularly negative” attitude towards Indigenous peoples in Canada (“even for his time,” the release reads) and his actions regarding the land rights of First Nations on Vancouver Island were in opposition with UVic’s values.

“Renaming is not an attempt to erase history or diminish the accomplishments of historical figures, including Trutch’s role in bringing B.C. into Confederation,” the press release reads. “Rather, the intent is to ensure that the UVic campus environment is aligned with our values.”

The building is to be known as Landsdowne Residence #1 while a new name is decided upon.

The name of Trutch has been an issue for several years now at UVic. In 2010, a group of undergraduate students petitioned the university to change the name, but were unsuccessful. This year, UVic student and Trutch resident Lisa Schnitzler organized another petition also objecting to the name. Schnitzler submitted her proposal in January and was surprised at how quickly the university accepted and executed the idea.

“It was really great to see the university take action on something,” Schnitzler said, reacting to the news of the decision.

Previous petitions to change the name were unsuccessful, but Schnitzler thinks that a changing climate on campus contributed to the university’s decision.

“We’re in a time now where Indigenous rights and reconciliation is so huge in politics and in news as well,” Schnitzler said, “that it’s something that the university couldn’t shy away from this time.

“It’s Canada 150, [so] there’s a lot of celebrations going around . . . but I think it’s really important, especially this year, to look back and see the truth about Canada’s past and to have those conversations with Indigenous people and see what you can do personally to create that action,” she says. “For me, [my action] was about learning about Trutch’s past and the history of that. [It’s] not erasing that history but confronting it and taking an action to move forward for campus.”

Trutch Hall’s namesake was a British-born Canadian colonist, most noted for his time as B.C.’s Chief Commissioner of Lands and Works from 1864–1871, and then as B.C.’s first Lieutenant Governor (1871–1876) after the province joined confederation. But the name-change petition goes far beyond his position as a colonizer.

“I’d describe him as a scathing racist with a drive to dispossess, colonize, and capitalize on the Indigenous lands of Vancouver Island,” said Yvonne Houssin, a Métis student and the Firekeeper of UVic’s Native Students Union, speaking for a previous Martlet article on the issue.

Emailing the Martlet after the name change was announced, Houssin stressed there is plenty more work that needs to be done at UVic.

“I’m happy the name is being changed, and I hope UVic decides to consult the WSANEC and Lekwungen nations going forward for a name recommendation in order to continue this work,” Houssin wrote. “[But] this is just the tip of the iceberg . . . there is so much work to do within the university that the general public doesn’t see . . . [For example], there have been Indigenous faculty members nominated to the Board of Governors and the Senate to speak on behalf of their faculty, but there isn’t a seat specifically made for Indigenous perspectives. This probably speaks to why multiple past petitions for this name changed [sic] have previously hit a wall. That very large power imbalance is just one of the big issues that needs to be addressed by the university going forward.”

Trutch consistently described First Nations people as “savages,” and argued that no Indigenous person had a right to Canadian land. Although this type of racism was not uncommon at the time, Trutch, a provincial politician, was in a uniquely powerful position to act on his bigotry.

The decision to remove Trutch’s name from the residence hall was ultimately recommended by the President’s Advisory Committee on Naming of Facilities and Physical Assets, who reviewed all other building names on campus. There were no further recommendations for name changes.

For Schnitzler, the changing of the name was only half the battle.

“The whole point for me isn’t just to get the name changed,” said Schnitzler, speaking to the Martlet in February. “It’s to start a conversation about colonization and indigenizing our campus.”

The story was updated with more recent quotes from Lisa Schnitzler and Yvonne Houssin.

This news story will be updated as more information is made available.