UVic Wears Prada: What staff and students are wearing on campus this fall

From the early 2000s filled with Uggs and leggings fashion, to the late 2010s defined by the VSCO-girl era, to the 2022 resurgence of dad jeans, Y2K, and ’90s styles, “what’s been in” over the decades proves that fashion is both fluid and cyclical.

The Devil Wears Prada puts it best: “Fashion is not about utility. An accessory is merely a piece of iconography used to express individual identity,” says Doug, a friend of Anne Hathaway’s character in the iconic film.

For many, fashion is a language and an extension of self that speaks to who you are as an individual.

So, what are UVic students and staff wearing on campus this fall? 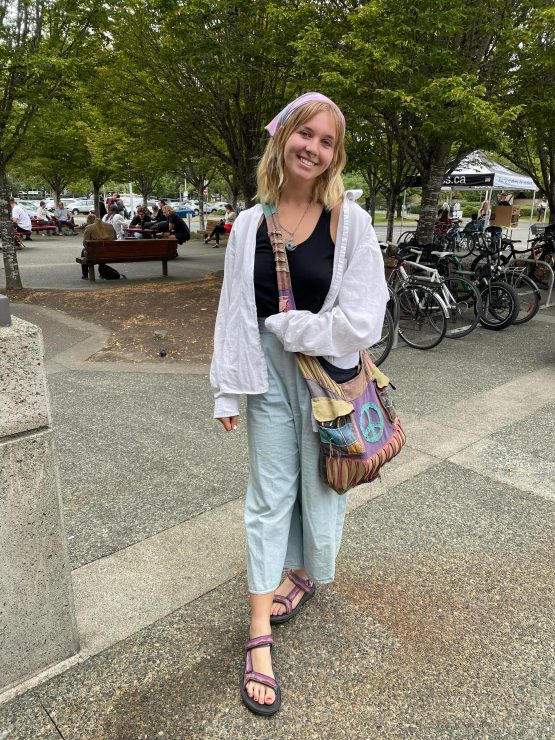 Meet Quincy Pike, an environmental science student at UVic. Sporting a pink bandana in her hair, baggy pants, and an over-the-shoulder, multi-patterned bag, she is definitely a standout in the crowd for her individualized style.

Pike describes her look as a mix of “hippie, boho, botanist, forest-dweller, hike-y, and granola-y.”

“I find myself quite inspired by the people around me, especially other people who are in environmental [studies], or more earthy people,” says Pike. “[I like] nice fabrics that are sustainable, like linen. Something light, thrifted, obviously, [that’s] better for the planet.”

If you were walking around during the Clubs and Course Unions Day at the Student Union Building, you could not have missed Sarah-Louise Decrausaz, a staff member here at UVic. Dressed in a bright patterned dress with blue hair and orange earrings, she caught eyes wherever she went.

She says her style is a bit of everything, but always a little ’80s.

“I don’t think it’s in right now,” says Decrausaz, when prompted about how trendy her style choices are. “I don’t tend to go with all of whatever is in at the time. I just pick and choose whatever I like!”

She mentions the TV show RuPaul’s Drag Race as particularly inspiring in her fashion journey, as well as plus-sized activist and model, Tess Holiday. 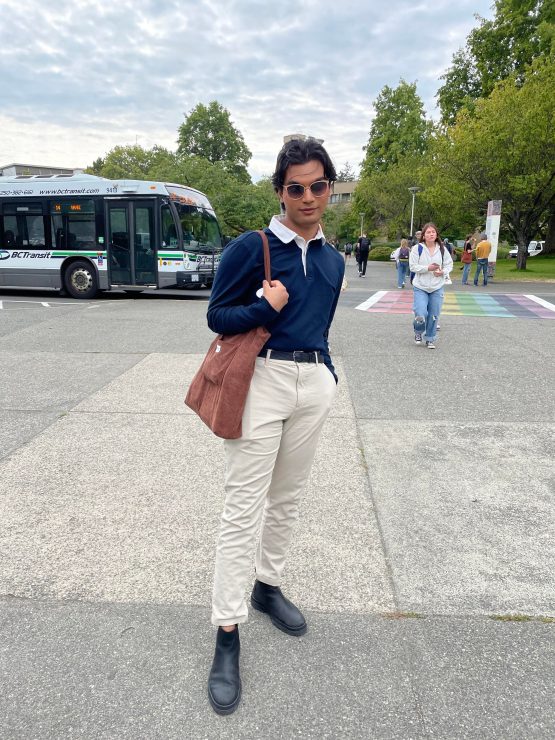 If you need fashion advice or inspiration, look no further. Zuhaib Muneer, a psychology and anthropology student here at UVic, is the one to talk to.

“My inspiration definitely comes from a lot of fashion shows, mostly Instagram fashion. But also a lot from the queer, drag culture [scene],” says Muneer, dressed in a dark blue polo shirt, a brown corduroy tote bag, and a stylish pair of sunglasses.

“I’m very involved in the LGBT scene, so a lot of the queer artists do definitely inspire a lot of my feminine looks. Today I’m not doing a feminine look. I’m in the middle — kind of masculine, kind of feminine — depends on my mood that day.”

An admirer of the film The Devil Wears Prada, he says that the iconic character Miranda Priestly, played by Meryl Streep, is definitely an inspiration.

“But other specific artists that I pick up from are people and designers like Christian Cowan. I take inspiration from a lot of Pakistani designers as well,” he says.

Thinking about investing in accessories to spice up your look? Elaine Balogun, a grad student at UVic, is the accessory and fashion queen. Her dangling pearl-based earrings could be seen from miles away.

“Earrings are such a good conversation starter!” says Balogun. “I also really love shoes; shoes are so fun! Accessories are the name of the game.”

As a big fan of looking for fashion inspiration from people on campus, Balogun loves when people play with more gender non-conforming and fluid clothing.

“I’m a big fan of looking around and seeing what other folks are wearing and picking and choosing,” she says. “And kind of thrifting and mixing it up [with] different eras. I gravitate towards anything that speaks to me.”

Last, but certainly not least, is Daniel Kopaee, both a psychology student at UVic and an active fighter for fashion individuality.

Kopaee, in his carpenter pants, red converse, and striped vest, mainly likes to accessorize by wearing his signature sunflower necklace.

“I try to bridge the different worlds I’m a part of, [which is being involved in] psychedelics and psychedelic therapy,” he says. “So [my fashion is] kind of like some ’60s, hippie, beatnik kind of thing. But I’m also a carpenter and a builder!”

Kopaee is a big advocate for people not just to follow trends, but to be themselves in what they choose to wear.

“I don’t pay attention to trends; I just wear what I like. I think that people’s most authentic expression of their inner character at that moment is probably going to be received well.”