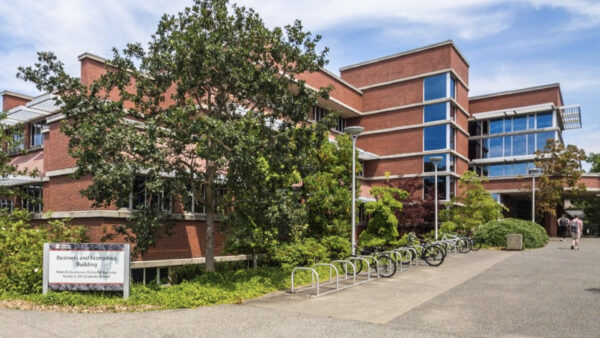 On July 8, UVic announced a new Master of Business Administration (MBA) program in Indigenous Reconciliation. It is the second specialized MBA at UVic, after the MBA in Sustainable Innovation, which replaced the standard MBA at UVic in the fall of 2020.

UVic’s new MBA in Indigenous Reconciliation was created in partnership between the B.C. Association of Aboriginal Friendship Centres (BCAAFC) and UVic’s Gustavson School of Business. The first cohort is expected to begin classes in spring 2023.

For readers that may not know what an MBA is, UVic describes their current MBA program as helping students to “navigate the complex challenges that we now face from economic, social, and environmental perspectives.” At the very least, two years of related work experience is required to participate in the MBA. There is also a weekend option that requires six years of experience.

The Martlet spoke to Saul Klein, the dean of the Gustavson School of Business, about the new program. According to Klein, the business school was only approached earlier this year about the program.

“We were approached very early this year by Leslie Varley, who is [Executive Director] of the B.C. Association of Aboriginal Friendship Centres, who was looking to do some additional work around leadership for their members and for leaders in the organization,” Klein said. “As we moved into those conversations with her, we realized there was an interesting opportunity to focus a program like an MBA on the specific needs of the social services sector.”

The program will be the first custom MBA in Indigenous reconciliation in the world. It has been equated with the JD/JID program, which was the first Indigenous law degree in the world and just graduated its first cohort this summer.

However, the reconciliation MBA is not yet a permanent program at UVic.

“The initial agreement is for two cohorts in this program, and they’ll run back-to-back, so each one will be around two years. The second one will begin once the first one ends,” Klein said. “We’re hopeful that this will be kind of like a pilot and then lead to an ongoing, permanent program in Indigenous reconciliation for the school.”

Funding for the program is coming from several streams. The BCAAFC, the Ministry of Social Development and Poverty Reduction, and Indspire will all contribute to the program.

In fact, the provincial government and the BCAAFC will have a significant role in the program. The BCAAFC and the provincial government will choose and recommend students for the program, and then UVic will determine whether they meet the requirements from an academic perspective. Cohorts are designed to be split evenly between Indigenous and non-Indigenous students.

Klein told the Martlet that he and the rest of the business school are excited about the start of the program and to have been chosen by the BCAAFC to host the program.

“We’re extremely excited. We were very, very happy to be selected. It continues and builds on a lot of prior work that we’ve done working actually both with the friendship centres, but in Indigenous communities more generally,” Klein said.

Though there is a lot of excitement surrounding the new program there are also those who have expressed discontent and hesitancy about the new program. There has been criticism that the program may do more harm than good when it comes to making community work accessible and appropriate.

“I really don’t understand the logic behind [the] criticism. I think it reflects a lack of understanding of exactly how the program works and how it’s designed,” Klein said.

“The friendship centres are the lead in this, and they have an acute understanding of both the challenges and the opportunities in terms of providing social services, primarily to urban Indigenous communities.”

Though only recently announced, the school is hoping to begin the program in spring 2023. Klein told the Martlet that the deadline should not be an issue because there is already an existing program as the foundation.

“I’m not that worried about the timing … because it’s an existing MBA program. There’s no additional approval processes required. If it was a brand-new degree in its entirety, we’d have to take it to the university Senate and it would have to get approval by the provincial government, etcetera,” Klein said. “But because this is, at its core, an existing MBA program, the process can move a lot faster.”