In a Facebook post published the day after campus club Youth Protecting Youth (YPY) held a public anti-abortion demonstration in the quad outside of the McPherson Library, the University of Victoria Students’ Society criticized the university administration’s handling of the situation.

The demonstration included the planting of 10 000 pink and blue flags, each of which, according to a press release from YPY, represent 10 abortions that happen in Canada every year. The flags were removed five hours after they were planted by a group of twenty counter protesters.

The UVSS’ criticism stemmed from a lack of warning from the university. 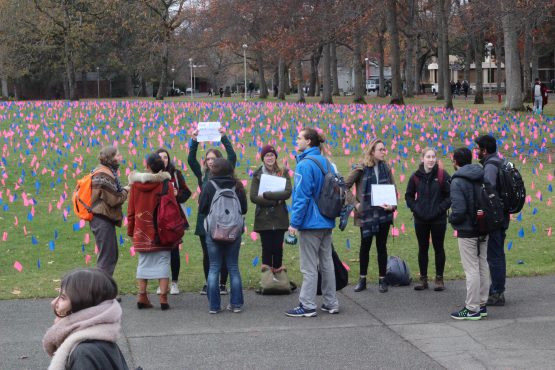 A small group of counter demonstrators showed up with signs that read “My body my choice — have a great Thursday!” Photo by Cormac O’Brien, Editor-in-Chief

“Due to the fact that we are held legally liable for the actions of clubs which has previously caused issues with certain clubs, the University has a policy where they give notice when a club has booked one of their spaces,” the statement read.

“However in the negotiations to do this demonstration, the university administration did not inform us in any capacity of this until Wednesday at 3 p.m. This prohibited us from making arrangements with the folks at the Anti-Violence Project to prepare for the fact that some might find this event to be triggering.”

John Derry, associate director in the Office of Student Life, Division of Student Affairs, made a statement apologizing for the miscommunication.

“[The Office of Student Life is] aware of the potential impact when groups like this hold events on campus, and we provided notification to many units across campus but, in this case, did not notify the UVSS in a timely way as we have in the past,” Derry said. “This has been corrected and will not happen again.”

Derry welcomes direct contact from the UVSS and students in discussing “any concerns that arise.”

“We look forward to working with the UVSS on future space booking requests that may impact the university community.”

In their statement, the UVSS also fully denounced the club’s viewpoint on abortion, writing that they “wholeheartedly support the reproductive freedom of women in making their own decisions surrounding abortions.”

The UVSS weren’t the only group contacted by UVic on Wednesday. Cecilia Fillipone, president of Youth Protecting Youth, told the Martlet that her club had applied for a permit to demonstrate on Nov. 2 but were also only given the go-ahead the day before the demonstration was scheduled.