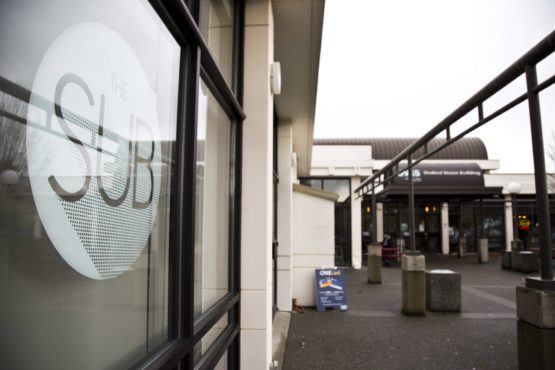 Jan. 7 saw the first UVSS Board of Directors meeting of the year, with the Upper Lounge of the Student Union Building more full than usual. Indeed, along with the Martlet in attendance, there was actually another other person in the audience this time around.

Kolin Sutherland-Wilson precedes his territorial acknowledgment by noting this "is only a symbolic gesture," reminding the Board of what is currently happening at the Unist'ot'en Camp and Wet'suwet'en people (see our previous thread for more information).

“Territory acknowledgments, while they might sound very equal in a certain respect, they do very little to uphold the actual authority of the people on those lands,” said Sutherland-Wilson, referring to the RCMP’s arresting of 14 individuals protesting the expansion of a pipeline on Wet’suwet’en First Nation territory in Northern B.C.

“So I think a territory acknowledgment is good, but in my mind it’s just one step of many.”

Following the territorial acknowledgment, several advocacy groups provided updates to the board.

The Feminist Collective/Third Space confirmed that an official name for their organization was not yet finalized, and a contest is currently underway to decide on an official name.

Updates from Advocacy Groups sees a question regarding the Feminist Collective/Third Space and their official name — the debate continues and no name has yet been decided.

Sutherland-Wilson of the NSU and Nathan Ponce, representative for the Students of Colour Collective (SOCC), both stated their organizations’ intention to support the Gitdimt’en and Unist’ot’en camps on Wet’suwet’en territory who are protesting pipeline expansion and RCMP arrests on First Nations land.

And Nathan Ponce of the Students of Colour Collective Representative confirms that they are working with other advocacy groups to support the Unist'ot'en Camps, and also speaks to a Spoken Word workshop they are planning.

Then came a few minor updates from the Lead Directors and a reminder that the Semi Annual General Meeting for the UVSS would be on Feb. 7, as well as an announcement from the representative for the Food Bank and Free Store pertaining to their patronage.

The representative for the Food Bank and Free Store says that a large portion of its users are international students and families.

Question period came next. The Martlet asked all Lead Directors if any of them were involved in the decision to bring Starbucks to campus. Specifically, were any Directors on the Bookstore Advisory Committee last year, and if so, were they consulted regarding Starbucks?

“This was all done purely from UVic. We weren’t really consulted in any way about this.”

“Starbucks … [is the] largest competitor to Munchie Bar, which is also one of our most profitable businesses,” answered Pierre-Paul Angelblazer, Director of Outreach and University Relations. “It’s a bit of a conflict of interest for us to be telling the university ‘no, we disagree with the Starbucks’ or ‘yes, we want to have a Starbucks,’ because either way we have some sort of financial [stake].”

Angelblazer did say that he was a part of the Bookstore Advisory Committee last year, but that he did not recall every discussing Starbucks.

“I was on [the Bookstore Advisory Committee] last year and from what I remember last year there wasn’t any discussion about it then. I know when we were talking to the administration, essentially, what they told us was that this decision was made quite a while ago.”

Noor Chasib, Director of Events, confirmed that the UVSS Lead Directors had not been consulted on the decision.

“We weren’t given any warning, we found out at the exact same time that every other student had found out… This was all done purely from UVic. We weren’t really consulted in any way about this.”

After question period, the Board approved a motion for an emergency meeting on Monday, Jan. 14, where UVSS advocacy groups will discuss ways in which they can support the Wet’suwet’en First Nations in Northern B.C.

Moving forward, the Board approves the motion to call an emergency Board meeting on Monday, Jan. 14. This meeting will discuss how the UVSS advocacy groups can financially support the Unist'ot'en Camp and Wet'suwet'en Nation.

With the ratification of several existing clubs and 10 new clubs, the Board called the meeting to an end.

We're out — but you'll hear back from us quite soon as we'll be live-Tweeting the emergency meeting on Monday, Jan. 14! Stay tuned! pic.twitter.com/kTdSCAgEMh

The next UVSS Board meeting will be on Monday, Jan. 14 at 6 p.m. in the Upper Lounge of the Student Union Building. You can follow our live Twitter coverage at twitter.com/themartlet.