Your Jan. 21 UVSS board meeting recap 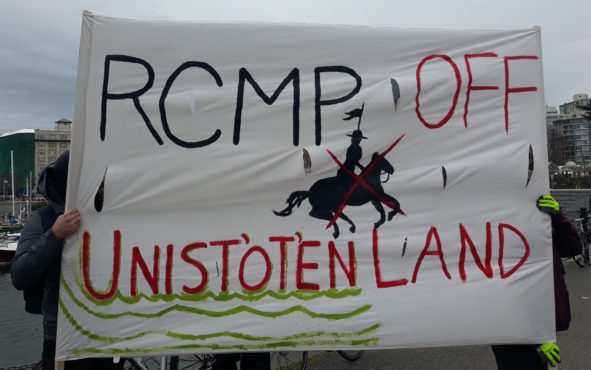 People assembled across Canada a few weeks ago to protest the RCMP’s raid on Wet’suwet’en territory. Photo by Anna Dodd, Editor-in-Chief.

Unlike the previous board meeting that lasted almost five hours (you can read our recap here), this meeting was short and sweet.

The meeting kicked off with a land acknowledgment from Kolin Sutherland-Wilson, representative for the Native Students Union (NSU).

“I highly encourage everyone to [do a land acknowledgment]. I might be intimidating [with] my take on territory acknowledgments, but I think it’s good to … embrace the uncomfortableness,” he said.

“We are very blessed to be on a very beautiful territory, that has been [cared for] by the Saanich, Lekwungen, and Esquimalt people for generations, and we have the duty to uphold that continuity of healthy, beautiful relationships with the natural land.”

Pierre-Paul Angelblazer, Director of Outreach and University Relations, followed this by reminding board members of the Semi-Annual General Meeting (SAGM) on Feb. 6 at 2 p.m., encouraging everyone to help with organization and spreading the word.

Switching gears into reports from constituency organizations, Jasmine MacGregor, the newly elected representative for the UVSS Feminist Collective/Third Space, announced that with the Anti-Violence Project and the Feminist Law Students’ Association, they’ll be hosting a movie night at the Roxy Theatre called ‘Your Problematic Fave’. The event will consist of watching the film Bring It On and heckling loudly when problematic scenes occur.

Curtis Whittla, Director of Finance and Operations, mentioned  that the Electoral Office is now fully staffed, and reminded board members the call for nominations for the March elections began Jan. 21, they’ll officially open on Jan. 28, and nominations will close on Feb. 11 at 9 a.m.

Following a quiet question period (no questions were asked), the board carried on to the main motions. There was only one, and it pertained to the UVSS’s support of the Unist’ot’en Camp and Wet’suwet’en people. (You can find more information on the situation here).

“I think the University of Victoria will notice this … when they see how committed we are to better relationships with Indigenous peoples.”

On Jan. 14, the board already voted in favour of financially supporting the Unist’ot’en Camp, but members decided that the exact number would be discussed at this meeting.

The original motion in the Jan. 21 agenda, proposed by Whittla, was to donate $500 from the UVSS donations budget to the Unist’ot’en Camp, however many board members — including Isabella Lee, Director of Student Affairs; Avria Chrystal, representative for UVic Pride; and Natalie Blecha, representative for Society for Students with a Disability — suggested more.

In the end, Director-at-Large Jordan Gilson proposed that the donation be amended to $1 000.

Aside from noted abstentions from Directors-at-Large Shaun Zhang and Eric Bukowski, all present board members voted in favour of the amended motion.

The meeting ended on a high note, as Sutherland-Wilson, who first brought forward the idea on behalf of the NSU two meetings ago, told the board he was proud that they were doing this.

“I’m really happy with this discussion… I just want to say something about it because I’m pretty moved,” he said. “I think this is going to go down in the books. The contribution we’re making, especially [because] it’s a very significant [amount], will not go unnoticed.”

“I think the University of Victoria will notice this … when they see how committed we are to better relationships with Indigenous peoples.”

With that, the board moved to in camera, and the Martlet exited, just a half hour later.

The next UVSS board meeting will be at 6 p.m. on Feb. 4 in the Upper Lounge of the Student Union Building. These meetings are open to the public — or, you can follow our live-Twitter coverage at www.twitter.com/themartlet.